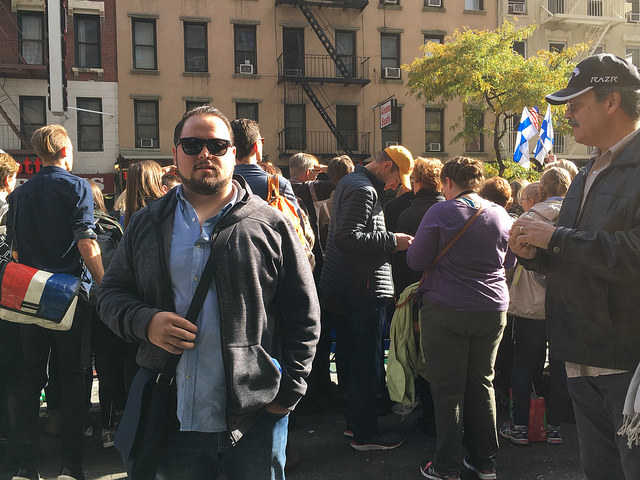 Luiz Morales, 20, stands near 62nd Street and 1st Avenue in Manhattan as he waits for his father, Alex, to run past the 16-mile mark of the course on Nov. 6, 2016. Hundreds of people lined 1st Avenue on both sides encouraging marathoners as they ran past with handmade signs and enlarged photos. Photo by Razi Syed.

Standing along the sidewalk at 62nd Avenue and 1st Avenue, Luiz Morales was waiting restlessly among the throngs of supporters and well-wishers who cheered on New York City Marathon runners.

Around noon today, the 20-year-old Morales lifted his head every 10 seconds or so, and scanned over the throngs of people who lined 1st Avenue in an attempt to make sure Morales would see his father, Alex, pass what was a little bit beyond the 16-mile mark.

“I need to be focused because at any moment he could pass,” Morales said of his 52-year-old father, who flew in from Puebla, Mexico — a major metropolis located southeast of Mexico City. “He’s running New York for the ninth time.

“He’s ran Berlin, Chicago, Boston, Paris and, I think, Dallas and Tokyo,” Morales said, over the loud cheers for the steady stream of runners passing by.

Morales has traveled with his father around the world to run in marathons. He said standing among the crowd and encouraging his father as he ran was the most enjoyable part of the race.

“It’s fantastic for my dad and all the runners for the support from me and all the other people,” Morales said. “I think it’s great.”

The atmosphere along 1st Avenue was jovial, as people supported their friends and relatives on with signs and cheers, with the constant sound of rock and pop music in the background.

While the first six years of the marathon consisted of just laps around Central Park, for the past 40 years the route has snaked its way through all five of the city’s boroughs.

Runners start the race in Staten Island, cross the Verrazano-Narrows Bridge and through a variety of Brooklyn neighborhoods, over the Pulaski Bridge into Queens and across the Queensboro Bridge into Manhattan. Runners then make their way uptown, crossing into The Bronx briefly and before coming back to Manhattan, where the race finishes at Central Park South.

Over the next couple hours, Morales will move on to Harlem and Central Park to cheer on his dad as he came up to the final miles of the race and crossed the finish line.

“The sound, all the people that are cheering for their own people are fantastic,” Morales said, explaining why the New York marathon is the favorite of him and his father. “The weather is fantastic, the city is fantastic.”

This is the ninth time that Morales has accompanied his father to New York City Marathon, which will end with their traditional post-run celebratory meal of hot dogs.

With runners from over 100 countries represented, the city’s marathon is a true international affair. With two blocks near the course’s 16-mile mark, flags for Sweden, Germany, Mexico and Spain were visible, among the handmade signs and enlarged photos held aloft by spectators.

A committed athlete who focused his energy on playing soccer before he pivoted to long-distance running, Morales said his father’s motivation to run came to him in spiritual terms.

“His inspiration is the uncles and cousins who’ve passed away,” Morales said. “He sees it, like, ‘This marathon is for all the people that pass away.’”