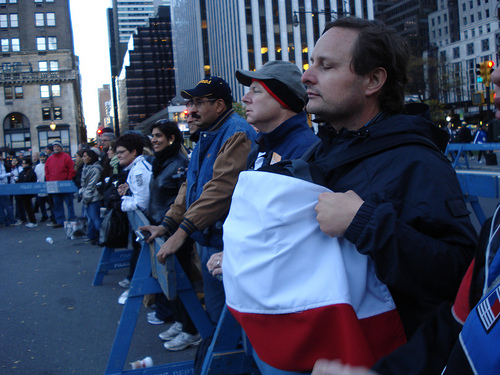 Pablo Castro is the first to admit he’s no runner — a fact he unabashedly attributes to laziness — but he’s no stranger to the ING New York City Marathon either.

“I’m here to show my support,” said Castro, 56, of Yonkers, N.Y. “I’m here every year. It’s a great thing — especially the effort made by the people who finish late.”

Jumping up and down from the sidelines Sunday evening, partly from excitement and partly to ward off the cold, the Chile native cheered on the thinning stream of runners who shuffled down Fifth Avenue, entering the race’s final stretch through Central Park almost seven hours after starting in Staten Island.

It was a show of endurance Castro said he found particularly inspiring this year. As streetlights illuminated the dwindling crowd of spectators, Castro leaned against a wooden police barricade, hoping to catch a glimpse of the one marathoner he believes embodies the very spirit of the race — Chilean miner Edison Peña, nicknamed “The Runner” for running six miles a day underground while awaiting rescue with 33 others in October.

“I followed the whole thing about his rescue,” Castro said. “You really have to admire them. It really shows the human effort, you know? It’s great. It’s the desire to move ahead and keep going.”

As runners continued to trickle in, some catching a final wave of gusto from the scattered cheers and others clutching painfully at their sides, Castro received an update.

“I passed him earlier,” said Clive Jijena, sporting a gleaming bronze participant’s medal around his neck. “He should be here around 5 (p.m.)”

A marathoner hailing from Santiago, 40-year-old Jijena crossed the finish line earlier that afternoon, completing the race in about four hours. He stood by Castro to watch the final runners, easily striking up conversation with his fellow countryman.

“I’ve been to the mine myself,” Jijena said. “The owner was a customer of mine. (Peña) is getting treatment like a rock star. It’s crazy he’s running.”

To their right, Roberto Nunez nodded in agreement while waving a large Chilean flag in the growing darkness. Nunez, 34, said he traveled from central Chile to New York to cheer on two friends participating in the race.

“I see a lot of fellow flags in support,” Castro said. “None of us know each other. It’s funny.”

By 5:30 p.m., another stranger informed the men that Peña had stumbled across the finish line about two hours earlier, limping slightly but finishing nonetheless. Castro laughed. He said he would have stayed to watch the stragglers anyway.

“This part always seems more real to me,” Castro said. “They know they’re not going to get anything. There’s no prize, no awards for them. These people know they have no chance of winning. They’re just running because they like to run.”