NYC Marathon: Waiting for their runners 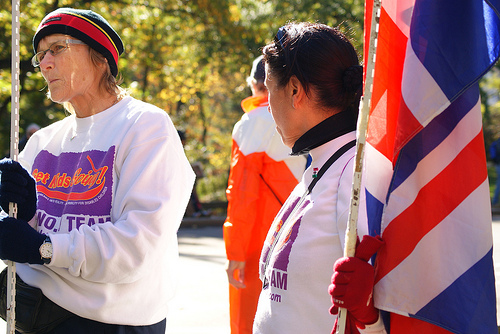 Joy Menage and Jackie Dickson stand on the sidelines in Central Park, anticipating runners from their charity Get Kids Going to pass by at the New York City Marathon. Photo by Jessica Bell

Two Union Jacks waved above the crowds lining the East Drive in Central Park on Sunday as four women from London-based charity Get Kids Going waited for their runners to pass the 25-mile marker.

Jackie Dickson, 62, a former New York City Marathon runner and volunteer for Get Kids Going, held a flag and looked around the bend in anticipation, hoping the female wheelchair athlete they had been waiting for would come by.

“Shelley should be here soon. It’s not like her to be this far behind,” Dickson said of Shelly Woods, a Paralympic silver medalist racing for Get Kids Going, a charity that provides sports wheelchairs and personal training to disabled children.

Unlike David Weir, winner of the wheelchair marathon and Get Kids Going racer, Woods had not passed by the mile marker as expected.

“Probably a puncture,” said Jane Emmerson, chief executive of Get Kids Going. “Punctured wheels are their biggest problems out there. They have to keep going with the equipment they have, and when they get a puncture, they really have no chance of winning.”

This year, 150 racers are participated in the marathon on behalf of Get Kids Going. The organization anticipates raising $75,000 through pledges for racers.

The charity kicked off its first fundraising initiative at the New York City Marathon 14 years ago and has been coming back ever since.

“We really love coming to New York,” Emmerson said. “We love the atmosphere here, and we really love the American spectators. They’re so positive and really appreciate the runners.”

At that moment Dickson, Emmerson and several others crouched down to the level of Woods in her wheelchair as she passed by. They clapped their hands and yelled encouraging words, and then she was gone, around another corner and on her way to the finish line.

“We come to this location in Central Park every year,” Emmerson said. “It’s mile 25. … We tell all our runners where we’re going to be, and then they know, once I see them it’s only a mile left.”