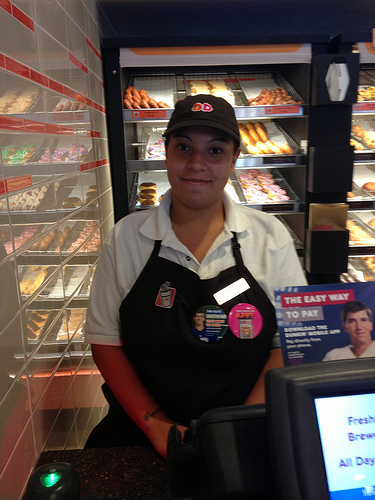 Dunkin Donut worker Crystal Lopez, says she can’t afford to buy everything she needs on her minimum wage salary. Photo by Alexandra Palmer.

On this primary day, while a lot of New Yorkers are casting their ballots for the candidate of their choice, fast food workers in Washington Heights are debating the weight this election holds for their economic futures.

“Homelessness and getting laid off are issues everyone’s facing, that’s why we need a new mayor,” said Amy Grossman, 19, a resident of Washington Heights and an employee at the fast food chain Chipotle on 168th and Broadway.

Grossman was referencing the 73% increase in homelessness during Mayor Bloomberg’s 12 years in office.

“I worked for minimum wage, and I just feel it’s horrible,” she said.”

Washington Heights boasts a population of 159,314 residents, mainly Dominican Americans. Workers and residents alike are looking for a mayor that will raise minimum wage, end the threats of homelessness and make a change in their neighborhood and city.

For six years minimum wage has remained frozen at $7.25.

“I’m fine here, Grossman concluded. “I love working here. I have a second job, but that’s for food and shopping expenses.” She said she’ll vote for Thompson, because he seems more involved in the community.

Across the street from Chipotle, Jelani Fernandez, 25, an unemployed resident took a five minute break from his job hunt and sipped a hot cup of coffee in the neighborhood’s McDonald’s. He said he’s not voting because all the candidates appear to be the same. But he wants the new mayor to increase minimum wage, “maybe $15, $16, $17,” he said. 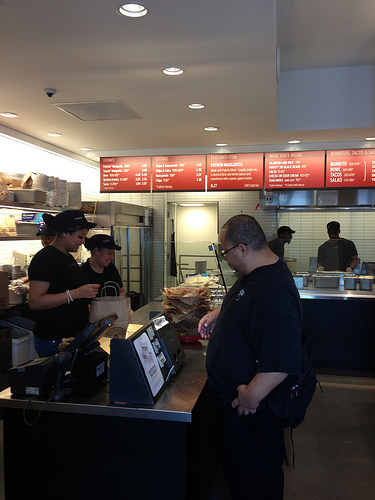 In regards to the ever-widening gap between the city’s rich and poor, Fernandez said fast food is an option for people to not be jobless, but there should be more options.

“This rise of rent, low incomes, more taxes on the lower and middle classes limit people to work and to stay home,” he said. “You have to pay the bills, the electrical bill, phone bill, food bill, you live a slaves life, you go to work and then you go back to your cage.”

Maintaining a job that is unable to provide the basic necessities is not an option for Fernandez.

“If I have no choice or other option, I would take a fast food job with my mind already thinking about the next step in my career to take,” he said.
Another block north, a new Dunkin Donuts has opened up in the neighborhood. Just one month in operation, Dunkin workers there too are in favor of increasing their wages. Crystal Lopez, 22, a Bronx native, said she can’t afford everything she needs on her current wages.

Lopez fears she cannot afford her already humble lifestyle. In the end she said, “only if things start to change will the new mayor become important in my life.”

If forced to make due with the current minimum wage Lopez said she would just make do.