NYC Primary: LGBT voters of color not in Quinn’s corner 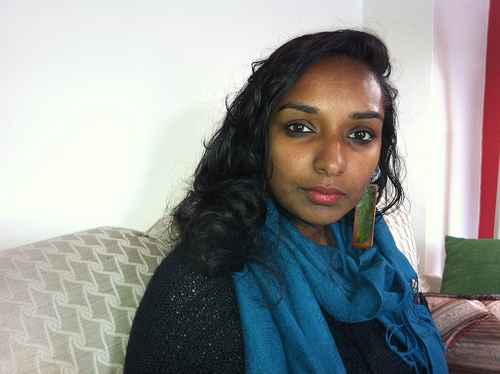 Thanu Yakupitiyage, 27, is a queer immigrant living in Brooklyn, New York on a work visa and says she supports political candidates based on actions not identity. Photo by Leticia Miranda

Just after the Supreme Court released their decision to overturn the Defense of Marriage Act, Christine Quinn gathered supporters outside of the Stonewall Inn. The case’s lead plaintiff, Edie Windsor, made an appearance and announced her proud support for Quinn. It was a symbolic moment where Quinn placed herself as the second in line to make gay and lesbian history as the next mayoral hopeful.

This moment was not her first and would not be her last even as her mayoral campaign gave way to Bill de Blasio as the leading Democratic candidate. Over the last two months Quinn has made bold attempts to court the LGBT vote by framing herself as the first lesbian woman mayor in New York City history and a symbol for gay rights nationally. Indeed her election would be historic, but her campaign strategy to pander to the LGBT vote as a bright symbol of progress alienated some queer people of color who say that policies and actions matter more than identity. Now on primary day, Quinn’s campaigning is languishing in the third place with hopes of at least participating in a run off fading fast.

Yakupitiyage has been closely following the mayoral campaigns though she is ineligible to vote because of her immigration status. She is especially critical of Quinn’s track record on paid sick leave, hospital closures and raising the minimum wage.

Two years ago, Quinn refused to let a paid sick leave bill come to a vote at the City Council in an attempt to cater to New York’s business community. When the Council finally voted and passed the bill, Quinn marked it a victory for New York while glossing over her attempts to stop the bill from a vote. But most importantly, Yakupitiyage is critical of Quinn’s support for Ray Kelly and her failure to vote against the Stop and Frisk bill, a part of the Community Safety Act which would prohibit police officers from profiling people based on race, gender, age or homelessness.

For some queer voters of color, Quinn’s vote on the Community Safety Act showed them that she is an unsurprising moderate candidate who manages to tap into her identity as a lesbian while also failing to concretely address the issues facing those communities.

“In some ways she challenges the gender norms,” said Chelsea Johnson-Long, a program coordinator at the Audre Lorde Project, a LGBTQ rights advocacy organization based in New York City that has been a fierce opponent of the city’s Stop-and-Frisk policy.

“But as a black lesbian who comes from a working class community, I have bigger concerns than getting married.” Johnson-Long said every time she walks in the subway with her girlfriend, police stop her to check her bag.

“I would be excited to see her address the intersections of race and sexuality and how that affects New Yorkers,” said Johnson-Long who has worked with trans and queer communities of color in New York for five years. For others, Quinn’s identity platform is hardly a beacon of hope. Instead it confirms their cynicism about the possibility of electoral politics to bring equality.

“It would be unprecedented to have people of certain identities in high offices,” said Julian Padilla, a 27 year-old queer Latino in Bed Stuy, Brooklyn who casted his vote today for Bill Di Blasio. “But if they’re going to just use that to continue the disenfranchisement of those communities, we have to rethink electoral politics as the solution for social justice.”

Padilla learned about Quinn’s campaign mostly through Facebook where his friends showed their disapproval of the candidate after she failed to vote to ban profiling as part of the Community Safety Act. Quinn only voted for the provision of the Act that established an inspector general.