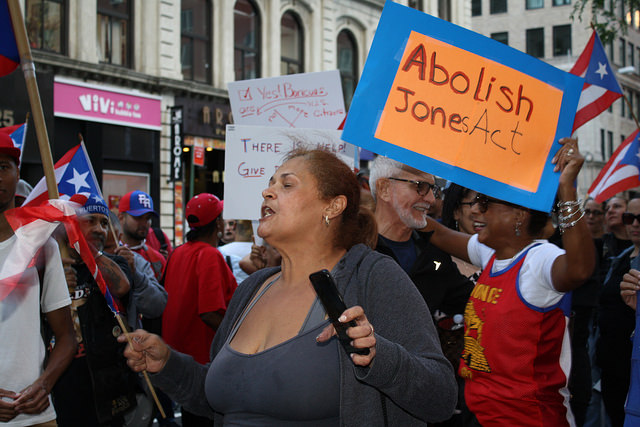 Red, white and blue Puerto Rican flags were waved along with signs that read “No American should be hungry” and “Rise up Puerto Rico.” The protesters marched in a circle and chanted, “Eight days and still we wait,” “Abolish the debt” and “Abolish the Jones Act.”

The Jones Act requires items from the U.S. to be shipped on American-owned and operated ships. According to CNN Money, this act has caused it to be “twice as expensive to ship things” from the U.S. to Puerto Rico. It was temporarily suspended yesterday, eight days after the hurricane destroyed the island, which is a US commonwealth and whose residents are American citizens.

Ambar Martinez, 33, of Brooklyn, attended the rally with her mother. They have family living on the southwest part of the island and waited six days to hear from them. She found out her grandmother lost the roof to her house and everything inside, including sofas, mattresses and beds, was destroyed.

“I think he (Donald Trump) is not giving it any importance,” Martinez said. “It is not important to him and he would rather spend his time on the internet bashing people over other topics.”

Janette Messina of Brooklyn attended the rally with her daughter. She wore a white hat with a black band that read “Puerto Rico.”

“We are here today to show the administration that they cannot forget about our people in Puerto Rico,” she said. “They are taking their time. They are treating us like second world citizens and we are U.S. citizens.”

Messina’s parents are from Puerto Rico and she currently has family there. She was able to contact some of her family through a texting app.

“One of them texted me today and we were ecstatic,” she said. “ I assured her that we are helping. Don’t think that you are alone. You may not hear us, but please feel us.”

Messina said even though her family is doing badly, they are still alive. She has yet to be able to reach all of her family..

“We cry every day,” Messina said. “We try them every day. In my heart and in my soul, I believe they are alive. But my heart cannot tell me if their house is still there.”

Erica Hernandez, 35 of East Harlem, is trying to spread awareness of the living tragedy in Puerto Rico.

“Puerto Rico is my motherland,” Hernandez said. “It’s where my parents were born. It’s where I’m from and the island where I got married. It means the world to me.”

She has donated supplies and does not know what else to do to help.

“Right now we feel very helpless,” she said through tears. “I don’t know what else I can do. I came here to use my voice because that’s the only thing I know to do right now.”