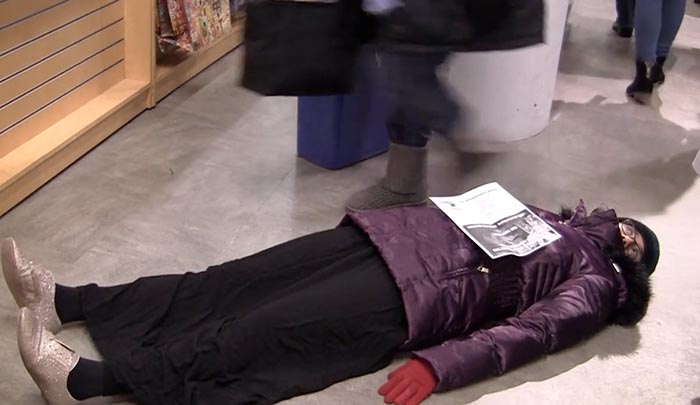 NYU Students Stand up for Sweatshop Workers from Pavement Pieces on Vimeo.

Earlier this month, students laid on the floor of the NYU Bookstore with their eyes shut and fliers placed on their chests that read, “Deathtraps never stop exploiting.”

The students are members of NYU’s Student Labor Action Movement (SLAM) and were protesting the University’s relationship with sweatshop labor in Bangladesh through a “die-in”. The JanSport backpacks sold in the cavernous East Village bookstore, are made in sweatshops, protestors said. VF Corporation, an American apparel company that makes the bags, refuses to sign the Accord on Fire and Building Safety in Bangladesh, which aims to make garment factories safe workplaces through the implementation of more building inspections.

SLAM, which is a part of the national organization, United Students Against Sweatshops (USAS), is pushing the University’s administration to end its contract with VF. The students staged the “die in” to highlight the many workers killed and injured in garment factory accidents in Bangladesh in the past year.

SLAM members also delivered a letter in person to NYU’s officials in February, requesting them to break their ties with VF.

“Our real power comes not from individual actions but by working together and putting pressure on the university,” said Ascherman. “Because we pay (the university), it should be responsive to students and listen to us, but that’s not actually how it occurs here.”

After doing some research on the matter, the University will be responding to SLAM’s letter this month, according to John Beckman, Vice President of Public Affairs at NYU.

“JanSport, like all the VF companies, operates independently and determines where to manufacture JanSport goods”, Beckman said. “JanSport has never produced apparel in Bangladesh.”

He also said that VF owns another brand called VF Imageware, which does produce in Bangladesh. However, NYU does not have a contract with VF Imagewear, and that no VF brand has ever produced NYU apparel or products in Bangladesh.

There have been numerous garment factory disasters in Bangladesh, including fires and building collapses. More than 100 workers were killed in a fire at the Tazreen Fashions garment factory in November of 2012 as reported by Human Rights Watch.

In April of 2013, over 1,000 workers lost their lives when the Rana Plaza building collapsed in Dhakka, the country’s capital. Rana Plaza was home to many Western retailers’ factories.

Ismail Ferdous is a documentary photographer, who is based in Dhakka, but also works in New York City. He was at the scene of the disaster and was able to capture the pain and devastation of both the victims and their families in his photographs.

“An eight-story building became like a sandwhich,” Ferdous said, demonstrating by clamping both his hands close together. “I never seen so many dead bodies in my life-like 1,200 people and the faces of the victims’ families broke my heart all the time,” he said.

SLAM wants to raise awareness about the lack of safety standards in many Bangladeshi garment factories so accidents like Rana Plaza don’t happen again.

But Ascherman said that the Alliance is “illegitimate, not legally-binding and does not provide enough funds” to ensure building repairs and inspections as the Accord does.

“They’re big companies,” said Ferdous. “They can afford to compensate the (victims’) families, because the families are poor. Some of the kids lost both their parents.”

As the one-year anniversary of the deadly Rana Plaza incident draws near, SLAM has experienced some success with their “End Deathtraps” campaign and getting their message out. “I think there’s been a significant amount of progress on this campaign,” said Ascherman.

He also said that recently several companies including Addidas and Fruit of the Loom have signed the Accord through the pressure of USAS groups at various universities across the country. “We’ve seen about six or seven groups sign on and so those factories will definitely start immediately seeing improvements.”

The safety and rights of Bangladeshi garment workers might not seem like an issue concerning Americans, but Ascherman begs to differ.

“Americans like anyone else are moral human beings and should be outraged about what’s going on and also should realize that as the major consumers of the products coming out of Bangladesh, we have a lot of power,” he said.