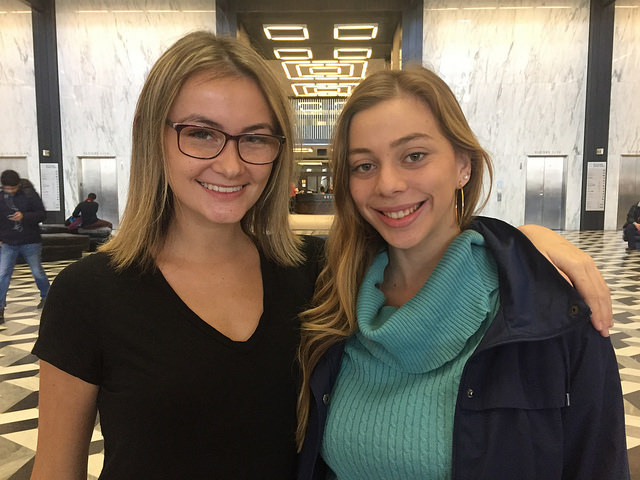 When Puerto Rican college students Ana Garcia and Daniela Valdes Bennett applied to transfer to NYU for their spring semester after surviving two hurricanes, they kept it a secret from each other. The friends broke the news through emojis — an airplane, followed by another airplane and an American flag.

Garcia and Bennett are two of the 57 students admitted to NYU for the Spring 2018 semester through the Hurricane Maria Assistance Program. Through the program, NYU covers full tuition, a meal plan, housing and health insurance for students whose educations were interrupted by Hurricanes Irma and Maria last fall.

“There were over 400 applications and several hundred more that were not completed,” said Josh Taylor, Associate Vice Chancellor of Global Programs at NYU. “We prioritized students with challenging living situations, no internet and who attended campuses with no electricity.”

Other major universities, including Tulane, Cornell and Brown, are offering similar programs this spring.

Bennett and Garcia decided to transfer after barely managing one semester on the recovering island. Throughout the fall semester, closed classrooms, destroyed equipment and loss of power made studying nearly impossible.

Garcia’s school was closed for weeks due to the storms.

“Water came through the roof and ruined all the computers, everything,” Garcia said. “When the school opened again, we were taking classes in different places. It was a mess. When classes resumed, the power wasn’t guaranteed.”

Today, 131 days after Hurricane Maria, Puerto Ricans on the island continue to struggle with the lack of reliable power. According to status.pr, 69% of the island has electricity, leaving 450,000 people currently without power. Garcia’s family completely lost power for four months. For Bennett’s, it was three and a half months, but they still have intermittent outages.

“Just this morning my family lost power again,” said Bennett. “It’s coming and going. Talking to them on the phone makes me kind of sad to know that they are still there. My twin brother is still studying in Puerto Rico and he keeps calling me saying, “‘I’m so jealous of you.’ I know it’s hard for them.”

During the fall semester, both students did homework using flashlights and candles. To do research, they drained their cell phone batteries and used what little data they had. When it was time to recharge, they took their laptops and phones to local cafes and waited along with dozens of other people who shared surge protectors and outlets.

“There were so many lines,” said Garcia. “For everything.”

At the cafes, the young women submitted their applications to NYU, which felt like a much-needed relief from the stress in the aftermath of the storms.

“The situation is just so overwhelming,” said Garcia. “You can’t think of anything but getting your power back and being able to shower with hot water.”

For Garcia, the chance to attend NYU for the spring seemed like a second chance to buckle down after a semester lost to the hurricanes.

“I found out that I had gotten into the program while I was at the bakery charging my phone and my laptop,” said Garcia. “And then I started crying and the people at the bakery were like, ‘Are you okay?’ And I was like, ‘Yea, I’m just really excited. This is good news.”

On campus at NYU, the transfer students feel embraced by their peers, despite the differences in their experiences.

“As soon as I told my roommates I was from Puerto Rico, they asked me about the hurricane,” said Bennett. “They sat around the table and I told them all of my stories and they were like, ‘Oh my god, wow.’

But the visiting students feel like their peers aren’t talking about Puerto Rico as much as they should be.

“I do feel like a lot of people have forgotten about it,” said Bennett. “People think it’s over and there has been so much progress, so I don’t want to complain. But it’s not over yet.”