The water line is still visible from Franca Costa’s windowpane. Everything in her house–the furniture, cabinets, refrigerator, washer/dryer, dishwasher and stove–she either received through donations or recently purchased.

For many residents of the tiny Oakwood Beach community of Fox Beach in Staten Island, Oct. 29 remains a day in infamy.

When Costa returned to her home on Kissam Avenue two days after Hurricane Sandy, the road was inaccessible due to the water and scattered debris. The inside of her home took in six feet of water.

“I was just totally devastated,” she recalled. “I didn’t even know what to do.”

The torrent of seawater came from all directions; bungalows were lifted off the ground and washed away, telephone poles were knocked down and trees completely uprooted. Clothing and other personal belongings poured out into the streets.

“It was horrible,” Costa said. “You can’t even imagine.”

Two blocks away on Fox Beach Avenue, two people died when their roof caved in on them. Even the local church looks like the leaning tower of Pisa, tilted on its damaged foundation. And the homes that do remain are still in dire need of repair.

The residents have had enough. Hurricane Sandy was the final straw that broke the blue-collar, middle class neighborhood.

In February, Gov. Andrew M. Cuomo announced  a home buyout program that would allow homes destroyed or heavily damaged by Hurricane Sandy to be sold to the government at 100 percent of their pre-storm value. The homes would then be razed and the land preserved as undeveloped coastline. As an added incentive, residents would receive a five percent bonus if they relocated within the borough. In some of the most flood-prone areas of Staten Island like Oakwood Beach, the government will give residents an additional 10 percent of the value of their home if an entire block participates in the buyout. 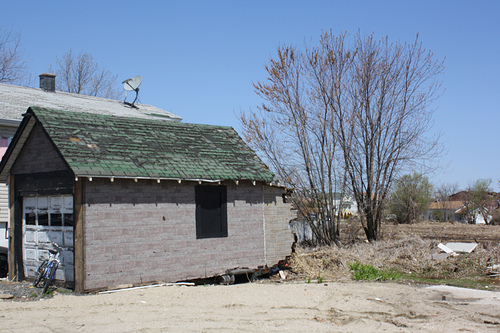 A garage in Oakwood Beach that suffered massive damage from Hurricane Sandy. All of the homes in Oakwood Beach suffered extensive flooding, and many homes are still in need of dire repair six months after the storm. Photo by Timothy Weisberg.

With efforts from the Oakwood Beach Buyout Committee, Oakwood Beach was selected as the pilot program for Gov. Cuomo’s buyout plan.

“I knew that we were really eligible for it and it was just a matter of time before the government was going to offer a buyout to people,” he said.

The state has allocated $171 million to buy homes in low-lying areas, and state officials project they will spend as much as $400 million on home buyouts. Ten thousand homes in the state were either destroyed or badly damaged during Hurricane Sandy, according to state officials.

Located in an area known as the Blue Belt, Oakwood Beach has had problems with flooding for years. Residential neighborhoods sprouted up during the mid-20th Century in advance of any sewage infrastructure found elsewhere on the island. As a result, the Blue Belt essentially acts as a storm water retention system for the rest of the island: the rocky hills inland slope down to the wetlands surrounding Oakwood Beach. So even during rainstorms, the streets could have anywhere from six inches to a foot of water.

“It’s not an area where homes ever really should have been,” Tirone said. “It was initially built up as a summer community of small little bungalows that were just boarded up over the winter.”

Six months after Sandy, Oakwood Beach has mostly been a ghost town. Only a dozen or so residents have made it back. The rest were displaced and until appraisers came last week to determine the property values, had not returned to their homes since the storm.

According to Tirone, of the 184 homeowners in the Fox Beach section of Oakwood Beach, 170 have registered for the home buyout program. Tirone, who owns a bungalow in Oakwood Beach, is also in the process of setting up residents with realtors and mortgage bankers to help them look for homes.

“Right from the start we had a majority of homeowners thinking buyout,” he said.

Despite the recent developments, residents remain in limbo, unsure of when they will receive payouts. Even for those who want to stay, new Federal Emergency Management guidelines double the size of the flood zones and require those living there to build their homes at least 13 feet above sea level or face sky-high insurance premiums. As a result, it remains to be seen if and when they can raise their homes to meet the new flood requirements, let alone when they will receive the grants needed to cover the costs of construction.

One resident who is no longer willing to take that risk is Franca’s neighbor, Bill Bye. Bye lost all of his possessions during the storm. His brand new 42-inch TV was completely destroyed by the storm surges that seeped into his home; his pictures, jewelry, clothing and furniture either washed away or were corroded by the salt water. 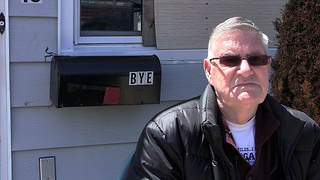 Oakwood Beach resident Bill Bye’s home suffered massive damage from flooding during Hurricane Sandy, destroying all of his belongings including clothes, furniture, pictures and a brand new 42-inch TV. After 30 years in the beach community on Staten Island’s eastern shore, Bye is moving out. He plans on participating in Gov. Andrew M. Cuomo’s home buyout program that will give homeowners 100 percent of their home’s pre-storm value. Photo by Timothy Weisberg.

Bye has lived in the area for 30 years, but has accepted the realization that Oakwood Beach may never be on Mother Nature’s side.

“It could happen again,” he said. “It’s too dangerous to live here.”

Although Franca is part of the buyout program, she remains deeply attached to the beach community she has come to love since moving to Oakwood Beach in 2006.

“I just hope that within six months, hopefully I’ll get my dream which is to raise the house,” she said. “So that we can stay here and keep our happy lives that we have here and not have to move on.”

[…] the buyout plan, attending meetings, researching the program, and organizing his neighbors. (See video about Fox Beach from May […]