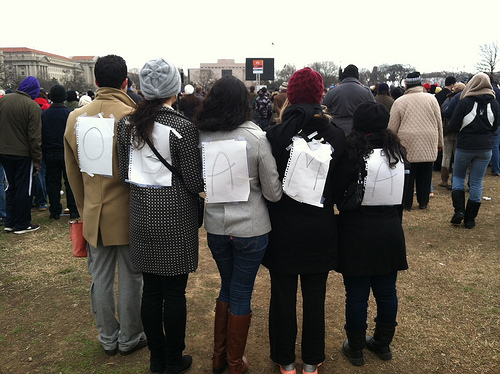 Francisca Fernando, 24, far right, and Katy Burk, 25, second from right, watching the 2013 Presidential Inauguration from a Jumbotron at the National Mall in Washington, D.C.. Photo by Timothy Weisberg.

WASHINGTON,D.C–Despite the decreased hype following Obama’s rise to the Presidency in 2009, President Obama’s message remains just as powerful: the nation must remain optimistic.

While history has a tendency to repeat itself, this is not Obama’s first rodeo. Over 800,000 people were in attendance at the 2013 Presidential inauguration, which marked the beginning of President Obama’s second term, a significant decrease from the 1.8 million that attended Obama’s first inauguration in 2009.

In the midst of a deep partisan divide in Congress, wars in Afghanistan and Iraq, and the worst economic crisis since the Great Depression, Obama’s message of hope and promise for the country remain in tact.

“It’s a different feeling this time around,” said Katy Burke, 25, of Washington, D.C.

Abui Tamakloe, 35, of Brooklyn, echoed Burke’s sentiments, noting that Obama’s second term placed less of an emphasis on what was then “history in the making:” the first black President of the United States.

“The fact he got re-elected means that people actually believe in him,” she said. “And it’s not just about the color of his skin, but also what the person stands for.”

Messages of patience and compromise to push the nation’s problems behind could not have been conveyed any better to the thousands that gathered in the non-ticketed area of the National Mall next to the Washington Monument.

A Jumbotron airing the inauguration experienced extensive technical difficulties, often with scratchy video and out of sync audio even as Obama was sworn into oath and James Taylor performed “America The Beautiful.”

“Can we watch the inauguration please?” one woman exclaimed impatiently. “This is really going well,” another man said sarcastically as he left National Mall.

Some booed and many left, but others laughed it off, knowing their presence alone was enough to understand why hundreds of thousands were in attendance. Hopefulness and assurance have embodied Obama supporters during four years of a sinking economy, high unemployment, and a rising gap between the rich and poor. 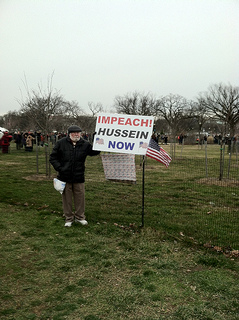 Dr. William Escoffery of Fort Walton Beach, Fla. protests the 2013 Presidential Inauguration. Escoffery, 68, believes people do not realize the problems Obama has created for the country over the past four years. Photo by Timothy Weisberg

“For me it did not matter because it’s a solemn occasion,” Tamakloe said. “I know why I am here.”

However, one of the few protesters at the National Mall during the inauguration, Dr. William Escoffery of Fort Walton Beach, Fla., believed the technical mishap epitomized Obama’s Presidency.

Holding a sign that read “Impeach! Hussein Now,” the Jamaica native found it alarming that such a high percentage of African-Americans were in support of Obama, adding that many African-Americans voted for Obama solely based on his ethnicity.

“(Jamaicans) are not hung up on black or white,” he said. “We look at the core embodiment of what a person’s doing for their country.”

And like his previous term, Obama faces many obstacles and battles ahead, where even supporters have mentioned that he has unfinished business.

With the Congressional gridlock over solving the fiscal cliff crisis, which would have prompted over $500 billion in tax increases and across-the-board-spending cuts beginning Jan. 1, only a few weeks old, another battle in Congress over the nation’s borrowing limit is under way. Issues over the debt ceiling and the country’s ability to pay back its obligations remain a core problem for a recovering economy.

“The first four years the economy was in a shambolic situation,” said Francisca Fernando, 24, of Washington, D.C. “You almost (consider) it acceptable, but now is the time for him to really make some changes and for us to see the impact of the policies he set in place.”

The President has also faced his fair share of criticism, including the handling of attacks on the U.S. Consulate in Benghazi Sept. 11, 2011, in which U.S. Ambassador to Libya J. Christopher Stevens and three others were killed.

And while he has made significant achievements in healthcare reform and a systematic overhaul of Wall Street, opponents point to his lack of an agenda for much needed economic recovery. The United States is also a nation in which the unemployment rate did not drop below eight percent until Sept. 2011, nearly three years since President Obama took office in January 2009.

The shootings at a Connecticut elementary school last month also make gun control a core issue for his second term, along with major changes to the nation’s immigration policies, the implementation of Obamacare, and other means by which to boost a stagnant economy, an agenda that will inevitably ignite a heated battle between Obama and House Republicans.

Yet according to a CNN poll conducted in Nov. 2011 and released Sunday, 54 percent of Americans were optimistic Obama would perform well in his second term.

Obama also mentioned the rights of gay Americans and pledged to solve the increasing problems of climate change.

“Our journey is not complete until our gay brothers and sisters are treated like anyone else under the law,” Obama said during his inaugural address, to rambunctious cheers from the crowd.

For people like Fernando, the hope is that Obama will be able to overcome the partisan riff that exists in Congress and push through important policies that will alleviate many of the budgetary and spending problems the nation will inherently undertake during Obama’s second term.

“He’s been given a second chance and I think people are really hoping that some changes happen,” she said.