Occupy Philly off to a slow start 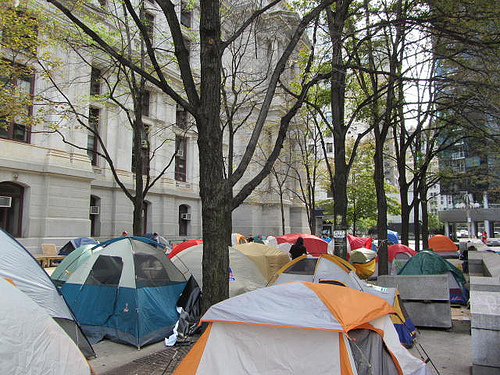 Nearly 100 tents have been set up on the western plaza outside Philadelphia’s City Hall, as part of the Occupy Philly movement. Photo by Chris Palmer 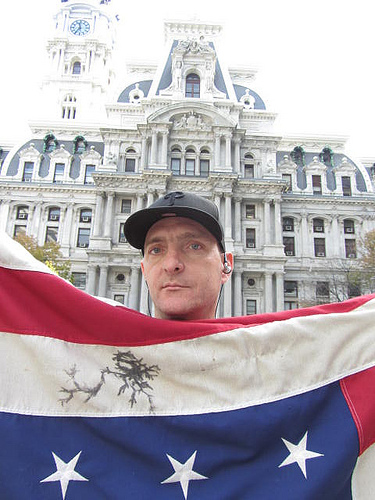 George Webb, an Occupy Philly protestor, held his American flag upside down to represent his distress with where America is headed. Photo by Chris Palmer

But Occupy Philly, which began four days ago in City Hall’s west plaza to try and replicate the scene in Manhattan’s Zuccotti Park, is still trying to find its sea legs.

Sitting at a table beneath the imposing shadow of City Hall, the 26-year-old Young, of Wayne, Pa., said that there have been positives and negatives about the initial days of the occupation.

On the one hand, as is the case at Occupy Wall Street, a variety of volunteer-staffed committees have been established to cover basic living concerns such as food distribution, blanket and tarp distribution, sanitation and security, and new committees are “popping up every day,” he said.

In addition, the city has supported the movement so far. Mayor Michael Nutter and police commissioner Charles Ramsey have both visited the site. There have been no incidents between protestors and police.

Most importantly, Young said, the number of people visiting the site has steadily increased. At last count there were 96 tents set up at the site – up from 51 two days ago – and he estimated that there have been several hundred people milling around the occupation each of the past few days.

“The numbers are definitely growing,” he said.

Nearly 100 tents have been set up on the western plaza outside Philadelphia's City Hall, as part of the Occupy Philly movement. Photo by Chris Palmer

But on the other hand, the occupation’s organization has been “evoloving,” Young said with a sheepish grin, and some protestors are wary about how the movement has progressed in its first few days.

Garvey tried to raise an issue during the general assembly, the twice daily meeting where all protestors can discuss any number of topics related to the occupation, but he stopped talking out of frustration with “the people’s mic,” a tactic that calls for the speaker to speak in short cadences that are repeated by the rest of the meeting’s attendees.

He said that he supports the idea of Occupy Philly, but he’s worried that a lack of structure will hamper the movement.

“I’m here to challenge them, because I think they’re worth it,” he said. “They have a great idea, but I think it takes a lot of time to get people from disparate beliefs to come together.”

Michael Miller of Juniata Park in Northeast Philadelphia, said that the number of beliefs and ideas among protestors was astounding.

“I’ve been hearing (about) so many issues,” he said, noting that he’s discussed issues from political unity to financial reform with fellow protestors.

But the jovial 35-year-old wondered whether the diversity of thought was helpful to the movement’s cause.

“Occupations should focus on one issue to create change,” he said. “What impact are we really going to make?”

Young noted that there have been major disagreements about a variety of questions at Occupy Philly already, including whether the movement should apply for a permit (it did), and he said that there is a small but vocal minority of people with “fringe beliefs” who tend to be rabble rousers, rather than major contributors to the occupation.

“I’m hoping the ‘not-die-hards’ die out,” he said. “I think they’ll realize that this takes work, and once they leave, we can get work done.”

But for some protestors, the expression of diverse opinions is exactly what makes this movement so unique.

“What we’re doing is fundamentally American,” said David Scher, a 23-year-old from South Philadelphia. “This is what democracy is all about, isn’t it?”

“We all have our own opinions and reasons why we’re here,” said George Webb, 39, from Mayfair, in Northeast Philadelphia.

Despite the early challenges facing the occupation, protestors were united in their desire to see the movement succeed.

“I hope this movement stands strong,” said Miller, noting that Occupy Philly has only existed for a few days.

And Young, who said the passion of the protestors has been encouraging, expects that the movement will continue to evolve over time.

“Nothing happens overnight,” he said.