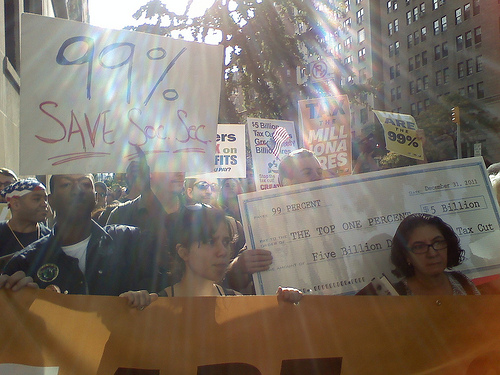 For most New Yorkers, Occupy Wall Street’s enigmatic protests remained distant, quarantined in a small area of Lower Manhattan. But after Tuesday’s romp through the Upper East Side, protestors took the first steps to break free of their mold.

Unlike the previous marches through Union Square and on the Brooklyn Bridge, Tuesday’s march had not only a unique setting, but also a specific purpose: to modify the tax code that the protestors said benefitted the rich.

“Very few people realize how rigged the (tax) system is and how much these people are benefitting from this rigged system,” said Kaprym Broido, a 26-year-old East Harlem resident. “And that’s why we are such a threat, because it’s a very small portion of the population that is actually benefitting from this system.”

The first stop was media mogul and billionaire Rupert Murdoch’s sleek Fifth Avenue pad overlooking Central Park. Clumped together in mass in front of Murdoch’s door, the protestors yelled out, “Come out and face the people you left out!”

To no one’s surprise, Murdoch did not show.

“Of course they are not going to come out,” said Jonathon Lipski, 25, of the Upper East Side. “It would be wonderful if they did come out and show their true colors, but they never will.”

Such was the theme of the march; with nothing more than doors to shout at, the group resorted to half-serious appeals at doormen to join their ranks, waving at onlookers crowded atop balconies and jeering toward window displays of some of the area’s more posh boutiques.

In fact, with so many stark contrasts to previous marches, it was only fitting that this march would not result in arrests and violence. The protestors avoided a police barricade in front of JP Morgan CEO Jamie Diamond’s residence that would have sent them spilling into the streets and into the arms of police officers. 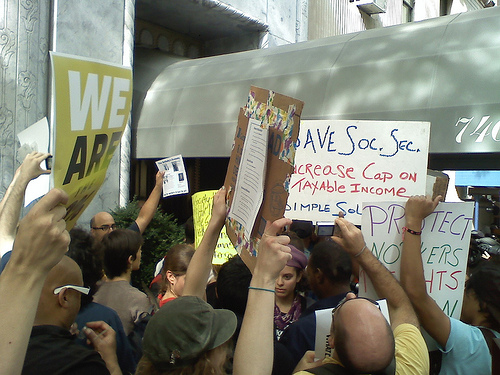 “I would say a march without arrests is a good thing,” Broido said. “We have permits to be on a certain path, the goal is to stay on that path.”

“This march is part of a multi-pronged strategy,”Lipski said. “It’s a message to the masses, to those too busy trying to get by to actually to actually take action. The march is about awareness.”

And according to Michael Blan, 61, of Greenwich Village, part of increasing general awareness involves letting the wealthy know that those protesting are aware.

“This (march) is just to let these people know that we know where they are and who they are,” said Blan, as the group assembled a block away from Paulson’s home. “All this talk about, well the top 5 percent pay 60 percent of the taxes, well they have 90 percent of the money. They should pay more.“