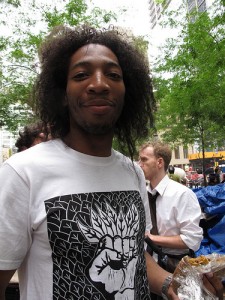 Shawn “Hero” Vincent is an important man these days within Zuccotti Park, the block-long rectangular plaza in Lower Manhattan that, boxed in by skyscrapers and dark uniformed police, feels like the bottom of an urban canyon. A tall 21-year-old with wild and frizzy black hair, Vincent could barely move a few steps yesterday without someone shouting out “Hero!” or being the recipient of a ferocious high-five.

“It’s an incredible feeling,” said a beaming Vincent of his sudden rock-star status inside ‘Liberty Square,’ as his fellow protesters have dubbed the park. Vincent has emerged as a leader among “Occupy Wall Street” activists, a ragtag civilian army that seized control of this territory September 13 to protest U.S. financial system inequality, among other progressive causes. Several hundred protesters camp out here every night.

Vincent described his job title here as “public relations facilitator.” But outside the confines of Liberty Square, things have been difficult for Vincent. Unemployed for two months now, he recently returned to his family’s North Carolina home, where he had to deal with “family tensions.” His sister is struggling to pay for college. His father has been out of work for two years, a reality Vincent called “ridiculous” and “outrageous.”

“It’s a hard point of life to be there, but it’s something we have to deal with,” said Vincent, sounding determined. “That’s why I’m here fighting.”

Within moments, however, Hero re-emerged at the center of a media frenzy, smiling for a TV crew, and standing alongside Russell Simmons, the business magnate who came here to show his support. For the next half-hour or so, the two walked around together and chatted like long-time pals; every so often, Simmons could be seen slapping Vincent on the back. 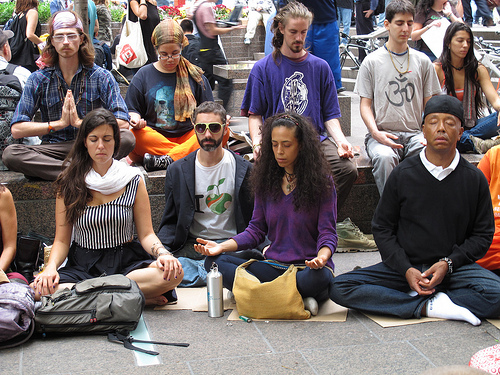 “He’s really cool,” said Vincent, speaking about Simmons as though the two were collaborating on a record. “I like Russell.”

For many protesters like Vincent, the past two weeks here have been life changing. The responsibilities they’ve taken on, and the human connections they’ve made, have injected them with hope, filled life voids, and even erased boredom.

One volunteer in dire need of a morale boost was Steve Smith, 24, who has been seeking employment for the past two months.

“I was getting pretty frustrated,” admitted the Bed-Stuy, Brooklyn resident, noting that non-stop phone calls and regular interviews have yet to bring him luck. “I have so much debt and no job.”

“I said, ‘I’m not doing anything else with my life and why not come down here?’”

“It’s really important [work],” said the tall, goateed Smith, who stuck makeshift Red Cross logos all over his clothes using red tape. “I don’t have to worry about getting depressed or getting down because I have something to keep me happy. It makes me feel great.”

Some volunteers are unemployed, but others, like 24-year-old graphic and web designer Drew Hornbein, have full-time jobs. Hornbein earns approximately $60,000 a year working out of his Crown Heights, Brooklyn brownstone.

“I have a great job. I make plenty of money,” Hornbein said. “But there is a certain emptiness to it, you know?”

Since joining the cause September 17, Horbein has been involved in “facilitating to show the outside world what we’re doing.”

Every day, Hornbein rides his bike here over the Brooklyn Bridge, then tries to nab a seat at the media center, a series of granite benches on the park’s east end where tech-savvy “occupiers” stare at laptops and help beam the park’s happenings worldwide. Sometimes, Hornbein stays here until 3 or 4 a.m.

“I’ve never been dedicated to anything [like this] in my entire life,” he said, his face radiating with joy. “I haven’t even checked Facebook. It’s amazing.”

“I’ve completely dropped all my work,” he added, his enthusiasm level escalating by the word. “I come out here, I have great conversations, I work towards something. But I don’t get paid for it. I don’t want to get paid for it.” 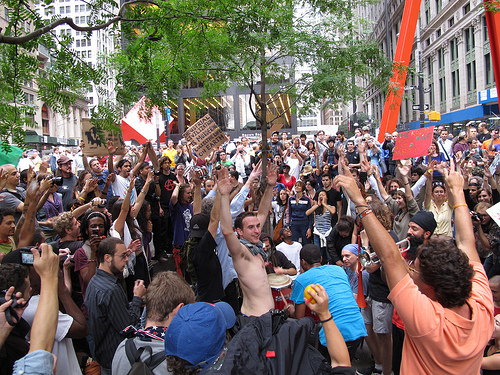 At dusk, a festive vibe overtook the park: a saxophone and drum-led jamming circle, accompanied by sporadic yelps of joy, echoed from the park’s western edge. Chants broke out. There was a repeated whistle blowing, as if this were the inside of a dance club.

“I feel so connected,” said Hornbein. “When you come here, everyone smiles at each other. And we’re all happy.”

Thanks for sharing. I commend your Dharma for the post. Many are seeking to understand how to stand against tyranny without contributing to negative energies. This may help: http://supremeboundlessway.com/2011/10/01/occupy-right-action-–-the-spiritual-practice-social-activism/