Occupy Wall Street uses art as a form of protest 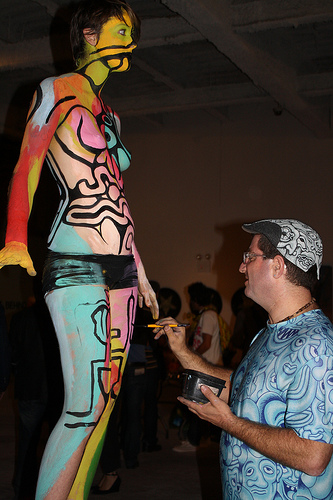 Art is the latest expression of protest for the growing Occupy Wall Street movement, and for 24 hours yesterday the abandoned JP Morgan building on Wall Street was the site of artistic protest.

Artist Andy Golub, 45, from Nyack, N.Y., painted a protester’s entire body in public. As he brushed black lines around her legs and up her torso to accent the colorful patches of paint, three uniformed police officers on horses watched while another group of officers approached them and told them they could not stand outside.

Golub instructed the protester, Yell, 24, of Bushwick, Brooklyn, to move with him, but at first she talked back to the officers. She told them she was a part of the exhibit inside. But Golub wanted to avoid arrest and ushered his model inside the building.

Golub and Yell were there as a part of the “No Comment” art exhibit, where various forms of art including sculpture, paint, video and spoken word were on display. The exhibit, according to the Occupy Wall Street website, aimed to show “the current paradigm shift of human expression and the emerging social condition.”

“I’m supportive of the people,” Golub said. “I wanted to come down here and feel the energy, by painting that is how I experience it. With art if it has a specific message then why do you need art?”

Yell had recently moved out of her Brooklyn apartment because she could not afford it. She now lives in Zuccotti Park along with the rest of the protesters who have been dedicated to the movement since the beginning. During one of the protests she was even sprayed with pepper spray by police.

“I want to keep fighting,” she said. “A presence is growing bigger everyday. I’m very proud to be a part of it. My biggest hope is already a victory, to get people’s attention.”

Erik Hendrickson, 24, from Trenton, N.J., is a sculptor who came down for the Occupy Wall Street protests early in the movement. He said this art exhibit was about extending his voice to another medium. His contribution to the exhibit was a flag made up of dollar bills. Hendrickson later burned a few parts of the flag.

“[This piece] is about looking at why do we have money,” he said. “Why is it a prevailing culture? There is so much emphasis on obtaining and gathering money to buy more stuff. I think it’s time for something else to come down the pipeline.”

Along with his friend, Martin Melendro, 22, of Trenton, N.J., Hendrickson patiently sat and constructed his flag at the exhibit. Later the flag was raised and received with applause from visitors.

Jillian Maslow of Manhattan, was one of the artists invited to showcase her work. Her dress titled “Target: Peace 2008 Sculpture” was made of bullets, bullet shells, dog tags and ball and chain. She had some reservations about bringing it due to the high security in the area.

“I didn’t know what to do, I wrapped it up in cloth,” Maslow said. “The taxi drove through Wall Street and the police dogs jumped up to sniff the car. I thought ‘great I’m going to go to jail for my art.’”

I was just wondering if you have any full-size pictures of the flag after it was raised…a friend of mine really wants to see it, and unfortunately I was lost in the moments of that night and didn’t take any myself.

Hopefully you can help?