On 9/11: Bringing the message to children 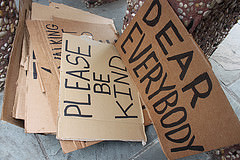 Days after the twin towers fell on 9/11 Eddie Coker wrote a song. The essence of that song became both the message of a youth organization and the reason he stood in Lower Manhattan on the 13th anniversary of 9/11 yesterday, with a sign that read “Forgive Others.”

“It was 9/11 that prompted the very first line [of the song] ‘each and everyone of us will fall’” said Corker.

Coker a resident of Manitou Springs, Colo., was once an opera singer in New York. After ac-cepting an invitation to perform with a friend in a children’s opera, he realized he had found his new calling. He became a singer songwriter for children composing not only music for his own albums but also for “Barney and Friends” and Borders Books.

When the tragedy of 9/11 happened, Coker had two small children of his own. His youngests daughter, was barely walking. In an attempt to process the pain and suffering of that day, he did what he knew best and wrote a song for his daughter. The song was a message of coming to-gether as a community and unconditional love one.

“We need to love each other, care for each other and be good to each other,” said Corker.

Coker’s need to explain the importance of compassionate treatment of others blossomed into a greater mission. A mission to provide youth with a formula for leading a happy and healthy life.

“Thirty years of working with children led me to realize we gotta help them deal with their heads,” Corker said.

After years of research he finally started an organization called Wezmore to fulfill this purpose. The Wezmore website is full of inspirational videos, songs and blog posts centered around their values. “It’s all about trying to spread goodwill towards human kind” said Coker.

Coker and his Wezmore Creative Director, Andrew Holzschuh of Dallas, Texas, came to One World Trade Center to work on one of their many video projects. They envision it as a letter to everyone.

They set up their camera in the middle of the chaos in Zuccotti Park. Steps from ground zero, they were surrounded by tourists clicking photos, families and first responders passing through to pay respects and church choirs singing the gospel. The crowds lingered and observed Coker’s performance.

Coker used handwritten cardboard signs of varying sizes to display his positive messages. Be Kind. Be Generous. Be Good. Happiness is something you choose. Holzschuh,24, plans to use the footage he captures of Coker to create a stop action video for their website and hopes it will have a big impact.

“This is a significant day. The best day to send a message to the world of positive things” said Holzschuh. “What happened, 13 years ago, it happened from a lot of hate and it formed a lot of hate”.

Hate is what these men say they want to help children deal with.

“If we can at least forgive someone in our lives I think that makes a small difference” said Hol-zschuh.