On 9/11: Difficult conversations with children 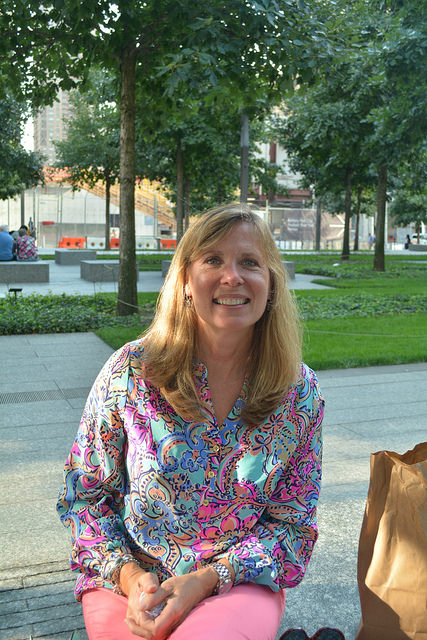 Lori Crotty, 53, from Summit, NJ visited the 9/11 Memorial to commemorate the death of her husband on the attack. Photo by Virginia Gunawan.

Lori Crotty, 53, from Summit, NJ visited the 9/11 Memorial to commemorate the death of her husband on the attack. Photo by Virginia Gunawan

As the nation mourned the 13th anniversary of September 11, a 9/11 widow still struggles to explain the loss to her three children.

“It has become a great event in the family and our lives definitely revolve around it but it is a difficult subject to talk about,” said Lori Crotty, 53, of Summit, N.J. “At first, it was really hard for them to understand because they were so young.”

Crotty lost her husband, Kevin Crotty, who worked on the 104th of the 2 World Trade Center on 9/11. She was left to raise three young children at that time, Megan, 7, Kyle, 5 and Sean, 2.

She encouraged them to be open about their feelings and tried to answer their questions but knows it may never be enough.

“I hope I taught them about good and bad,” she said. “Not in the sense of, who’s the bad person and who’s the good person, but to be able to understand in the higher level of the worldly perspective.”

Her youngest son, Sean, now 15, was with her yesterday to visit the newly opened 9/11 Museum, but he cannot talk about his father or the attack.

Other parents who visited Ground Zero yesterday had to face difficult conversations about the attack.

Robby Badruddin, 42, of Bandung, Indonesia, sat next to his son, Zoya, 12, and explained the memorial site. This is their first visit to the United States.

“I think we need to know where it is and what is left from the World Trade Center,” he said. “Although I never really told Zoya anything about it, but it is still a part of the world history that will be remembered forever.”

Zoya has heard briefly about 9/11 attacks from his friends and teachers. Coming from a Muslim majority country, the issue is less discussed with the same discourse as it has been in the States. Regardless, Zoya said, “I feel sorry for everyone who died. People should not die like this.” 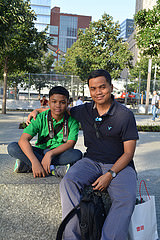 Robby Badruddin, 42, and his son, Zoya, 12, from Indonesia, visited the 9/11 Memorial in their first trip to the U.S. Photo by Virginia Gunawan,

Badruddin did not think that it was his obligation to talk to Zoya about the attacks, he said he could get the information from other sources.

“Besides, I want him to be able to find the truth,” he said. “If he always come to me for the answer, I might only give him my truth.”

A more formal educational program has been prepared by the 9/11 Tribute Center called Teaching 9/11. They have a toolkit with a lesson plans and personal stories of people who were affected by the event to be used by any school in the world. The toolkit is available on their website.

Director of Education and Exhibits at The Tribute WTC, Wendy Aibel-Weiss highlighted the problem.

“At that time, most students have not been born yet or they were too young to remember and parents have avoided the topic,” she said.

“The toolkit could provide educators a comprehensive way of introducing the sensitive subject,” she said.

A grandmother herself, the Park Slope, Brooklyn resident wanted to teach the younger generations about “great heroism when a city, a nation, and the world came together and recovered from it.”