On 9/11 mourners and tourists remember the victims

The name of firefighter, Peter Bielfeld who was killed during the 9/11 attacks. His whose family was at the memorial. Photo by Jennifer Cohen

On the morning of the 15th anniversary of the 9/11 attacks the mourners and tourists made their way to ground zero to remember the nearly 3,000 lives lost.

Many wore shirts to commemorate their loved ones that were killed. Dominic Branda and his family, of Ringwood, New Jersey, wore matching navy blue shirts with the FDNY seal on the front right pocket. On the back of the shirts was a red fire truck and the name Peter Bielfeld, and FDNY Ladder 42 in white.

“My wife’s brother was killed as a fireman in the South Tower,” Branda said referring to the name on his shirt.

Peter Bielfeld, 44, was part of Ladder 42 in the Bronx. At the time the first tower was hit, Bielfeld was at a follow-up doctor’s visit taking care of injuries he sustained in a fire. But no injury was going to hold him back from going to the World Trade Center to help.

“He was in Metro Tech Brooklyn, he was injured and he jumped in a captain’s car and came over the Brooklyn Bridge. Fate put him in Brooklyn at that time,” Branda said of his brother in-law.

And that was the last time anyone saw him.

John Hudnall, from Austin, Texas, came to visit the memorial with a friend. They can remember exactly where and what they were doing 15 years ago. They wanted to visit the memorial to pay tribute to the victims. Although our country has made strides against terrorism, Hudnall still believes another attack is imminent.

“I travel weekly for work, and I fly, and it terrifies my wife everyday, every time I’m on a plane or waiting to get on a plane”, said Hudnall.

He said he has the same fears as his wife.

David Sears, from upstate New York, was standing near the corner of Broadway and Vesey waving a small American flag. He wore an American flag on his t-shirt and a bright red hat with the letters USA written across the front. He watched as the friends and family of the victims of 9/11 entered the memorial at 8:30am. He came to the memorial first thing in the morning because as a patriotic man and a New Yorker, he felt it was his duty. 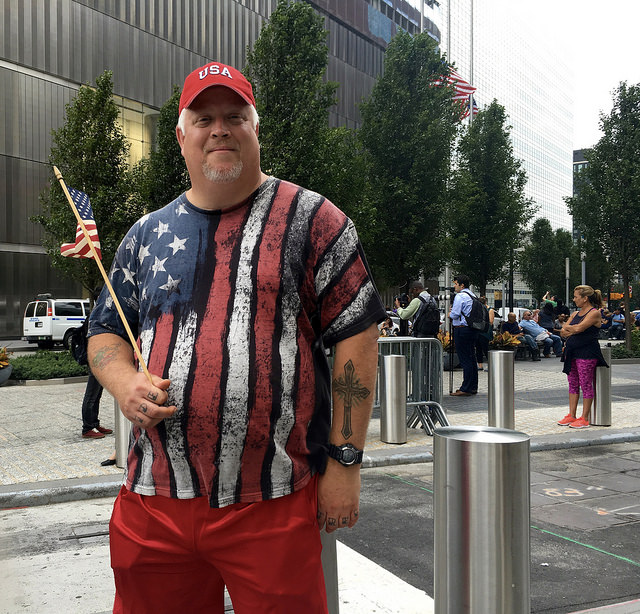 Sears believes today is completely different from what it was like in 2001.
Anybody who has the slightest thought of being a terrorist is thrown in jail,” he said. “Back then everything was just so free and open.”

Sears worries about the possibility of an attack happening again.

“Unfortunately, history dictates that we do get complacent after a while you know but, hopefully in my lifetime we will never see anything like this again,” said Sears.