On the front line of the heroin epidemic in Washington Heights 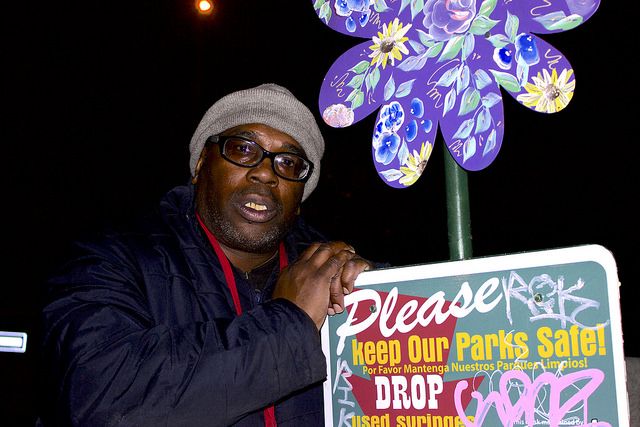 Washington Heights Corner Project peer educator Mike Bailey, 53, stands next to a kiosk for dropping off used syringes on Feb. 19, 2017. Bailey, who was formerly homeless and addicted to cocaine, has spent the past two years walking to ares of high drug use in Washington Heights to provide clean injection equipment to addicts. Photo by Razi Syed.

Standing underneath a parkway off-ramp in Washington Heights, Mike Bailey pointed to a syringe, half-full of blood and lying on a concrete barrier.

“Look at that,” said Bailey, a peer educator with the Washington Heights Corner Project. “The blood hasn’t even turned brown yet; someone just used this today. God knows what’s in there – hepatitis, HIV.”

Underneath the off-ramp near Amsterdam Avenue and 181st Street, Bailey motioned to the ground next to the barrier, which is littered with old syringes, old water packets and occasional junk food wrapper. An empty bottle of Duggan’s London Dry Gin and the bright orange needle caps stand out among the debris. 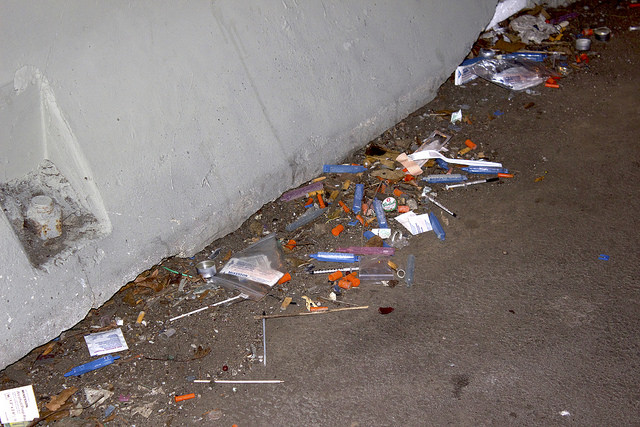 Used alcohol pads, syringes, needle caps and sterile water packets scattered on the ground beside a concrete street barrier underneath an expressway off-ramp near 181st Street and Amsterdam Avenue in Washington Heights on Feb. 19, 2017. The area is a popular spot in Washington Heights for homeless drug addicts to inject themselves. Photo by Razi Syed.

“We have hazardous-waste come and clean up here a couple times a week but it gets dirty again in no time,” said Bailey, 53, of the Upper West Side.

On Feb. 19, Bailey was making his regular weekend rounds through the George Washington Bridge Park, Highbridge Park and numerous street corners from 181st to 177th street, passing out clean syringes, alcohol pads, packets of sterile water, tourniquets and cookers, which addicts use in place of spoons to heat up water and dissolve heroin or cocaine for injection.

Bailey, a former cocaine user who once spent years living on the streets of Washington Heights, now walks his old haunts attempting to make sure addicts are able to use their drugs with clean equipment.

As heroin and prescription opioid use soared nationwide, deaths from drug overdoses in New York City have skyrocketed. The city’s most recent report, from August 2016, noted a 66 percent increase in drug overdose deaths from 2010 to 2015. Deaths related to heroin spiked 158 percent during that same period.

In Washington Heights, the Corner Project has seen a marked increase of injection drug users, with around 45 new people who sign up for the organization’s free syringe program each month, said Mark Townsend, a harm reduction activist and Corner Project staff member.

Bailey said his past experiences with drugs help him reach more addicts, pointing to the fact that he doesn’t wait in an office building for addicts to come to the Corner Project. Knowing that addicts aren’t always inclined to come into an unfamiliar space, Bailey said, “I go out and reach them where they are at.”

The Corner Project began informally in 2005 when several social workers and activists began walking around with backpacks to hand out clean needles to the addicts. The organization has grown to occupy a 9,000 square foot office at 181st Street and St. Nicholas Avenue, and has over 2,400 registered participants in its program. Around 70 percent of participants are using heroin and 40 percent are using cocaine, Townsend said.

In addition to the syringe program, the exchange provides hepatitis-C treatment, counsels participants on safer injecting, holds regular health clinics with volunteer physicians and gives training on Narcan, a drug which can reverse the effects of an overdose.

Bailey has seen first-hand what a syringe program can do to improve the lives of drug users, having started his involvement in the Corner Project in 2006 as a homeless IV cocaine user.

“This is where my beginning started before Washington Heights Corner Project,” he said on a recent Sunday night outreach shift, waving his hand in the direction of the George Washington Bridge Park and the surrounding streets. “I came up middle class in Jersey. But I started using; I came over to the city to cop because it was cheaper.”

Bailey first used crack cocaine when he was 22, after a friend introduced him to it.

“It was a three-minute high and then you do another (hit),” Bailey said. “I guess he figured, ‘If I get Mike on it, he can help support my habit.’ That’s the way it goes.”

For the next decade of his life, Bailey used crack cocaine, eventually switching to injecting powder cocaine. He spent his weekends driving over the George Washington Bridge into New York City to get cheaper drugs. By the time he was 35, in 1999, Bailey said he was in Washington Heights daily, on the streets or in jail.

Around two years ago, Bailey got off the street and into a housing program on the Upper West Side and became a peer educator for the exchange. He credits the program with helping him get the resources needed to leave homelessness behind.

In the years before the project, Bailey said addicts took extreme risks out of desperation. “We were all using the same stems (crack pipes), the same needles, the same cookers,” he said. “Without harm reduction, you’ll have widespread hep-C cases.”

Inside the Corner Project office, one Washington Heights heroin user, who declined to give his name, said he shared needles prior to becoming a participant. He counted himself lucky not to have contracted any diseases.

The exchange also helps operate a kiosk, near 177th Street and Haven Avenue, where needles can be safely disposed. Opened in May 2016, the kiosk is operated in collaboration with the city’s parks department.

The kiosk hasn’t gotten the amount of use the Corner Project hoped. Bailey said only several dozen syringes get collected in the kiosk each month, and that the location wasn’t ideal for drug users who use in more secluded parts of the park. Preliminary plans exist to expand these boxes into other parts of city.

Programs like the Corner Project operate on the philosophy that attempting to reduce harm is the best way to deal with addiction. The need for harm reduction programs has grown over the past decade, as opioid addiction has skyrocketed and deaths in New York City due to drug overdoses rose from 541 in 2010 to 937 in 2015.

However, needle exchanges retain a stigma in the eyes of many people and 16 states still lack syringe programs.

In early 2015, a rural Indiana county saw a spike in HIV, due to addicts sharing needles to inject prescription painkillers. Around 20 new cases of the virus were being reported each week at the height of the crisis. Local and state health officials encouraged the immediate opening of syringe exchange services.

Vice President Mike Pence, then-governor of Indiana, initially said he was morally opposed to needle exchanges on the grounds they supported drug abuse. Two months after the outbreak was detected, Pence shifted his position. Needles were distributed and dramatically slowed the rate of new HIV cases.

Commenting on the positions of politicians like Pence, Townsend said it’s “outrageous” that people oppose syringe programs in the 21st century.

“All we’re doing is making it so drug addiction isn’t a death sentence,” Townsend said.

“Lots of people come from Jersey that are 30 and under,” she said, noting that she has seen IV drug users as young as 14. The project has also stepped up online outreach in an attempt to reach younger people.

Harm reduction, at its heart, is about treating people with dignity, Olivares said.

“If I can help one person, or make one person smile each day, I feel like I’ve done something,” Olivares said. “I get high off of helping people and making them realize, ‘Even though you are a drug user, you’re somebody too. Your life’s worth living, you’re worth loving, you’re worth being here.’”