OWS Anniversary met with a cry for more affordable housing 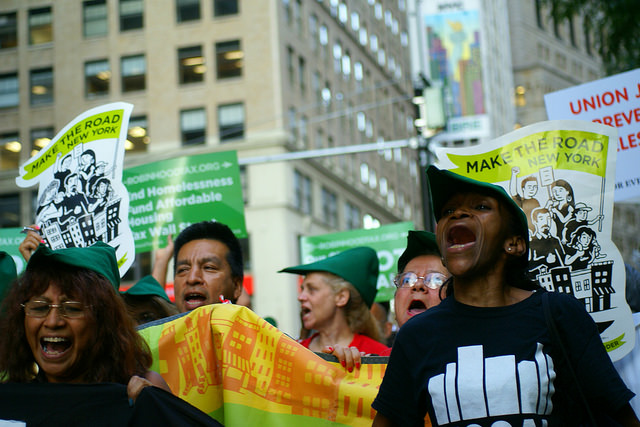 Zuccotti Park, in the heart of New York’s financial district, was a tumult with musical performers, performance art, die-ins and the rhythmic chanting of slogans yesterday. These congregants supplanted the usual foot traffic of professionals to rally for more affordable housing as part of the 4th Anniversary of Occupy Wall Street’s occupation of the park.

“I have a 22-year-old daughter who just finished college, who can’t get a job.” said Wensum Pendergrass, 56, of Flatbush, Brooklyn, and a hospital employee. He said his own rent has gone up. 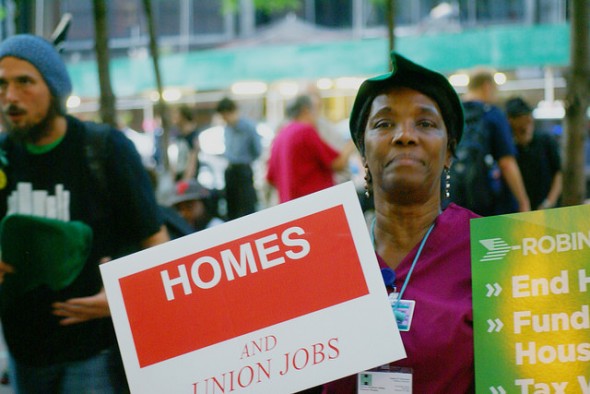 Wensum Pendergrass, a hospital worker, driven to rally in Zuccotti Park by her desire for less expensive rent. She is a mother and her daughter lives with her. She is certain that if she loses her job she will become homeless. Photo by Diego Lynch

Pendergrass’ experience is in line with city trends. According to a 2015 Pew Research Poll, only 67% of people aged 18-34 live independently and, according to Streeteasy, the typical new renter will spend 60% of their income on their rent.

But the impact of high housing prices on their lives wasn’t the only thing drawing people to the park. 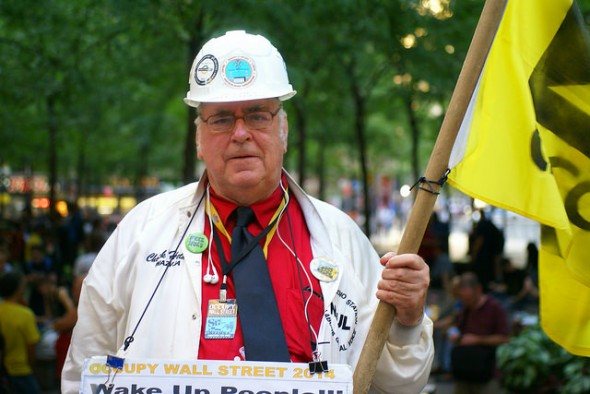 Chuck Helms, a member of International Brotherhood of Electrical Workers. He was covered in pro-union ephemera, including the flag, buttons, and embroidery on his clothing. He had been attending Occupy Wall Street since September of 2011, and now comes to Zuccotti Park every Friday. Photo by Diego Lynch

“I am a member of the International Brotherhood of Electrical Workers,” said Chuck Helms, 68 who protests at the park every Friday. “I come here from New Jersey and I know the importance of this to the children of America, the importance of the occupy movement. “My father’s generation handed down unionism to my generation, on a silver platter, we stole the platter, and we never taught our children that need for unionism.”

Zuccotti Park was the epicenter for Occupy Wall Street, a protest movement which sprung from the outrage associated with the Financial Crisis.

Occupy Wall Street’s influence was apparent in the park on the movement’s 4th anniversary. The chants that flowed over the park, “We are the 99%, and so are you,” and “The people united, will never be divided,” were mainstays of the Occupy Wall Street movement.

The reasons for being there were not constrained to changing government policy.

“Everybody should go to protests,” said Josh Hollingshed, 24, a philosophy student at The New School. “They are an important part of self development, of affirming beliefs.”

But he was careful to explain that attending was a political act.

“There is a better meaning for the term politics than electoral politics,” said Hollingshed. “People put a lot of energy into who is going to be president, when they would be a lot better putting that energy into their communities.”

But all of the protests, and the subsequent march to City Hall, were interspersed with shouted demands for lower rent.

“For the homeless people, I think the government can find a way to make the shelters more accessible, “ said Pendergrass. “If you don’t get to shelters by a certain time they have to sleep outside. “If I lose my job I will be homeless.”