Philadelphia Life: In memory of lost loved ones, women band together to fight crime

Donna Giddings poses with young men from the Carson Valley School. Giddings joined Mothers in Charge after her mother, son and her son's best friend were murdered in a triple homicide. Photo by Jasmine Brown

PHILADELPHIA — Dorothy Johnson-Speight had a dream. She was in a boxing ring surrounded by a group of angry mothers carrying bull horns and shouting into the city streets. They were calling for people to join them in the fight against violence. When she woke up, Johnson-Speight, who lost her only son in a dispute over a parking space, began to develop Mothers in Charge, an organization that provides support to women who have lost loved ones to violence.

It is made up of mothers, grandmothers, aunts, wives and sisters who have lost loved ones to violence in Philadelphia. Their mission is to reduce the number of violent acts, particularly homicides, in the city. Through activism, grief support and a myriad of different programs, they are working to raise awareness and save lives.

Nine years ago, Dorothy Johnson-Speight’s son, Khaaliq Johnson, was murdered. He was shot eight times in front of his house over a parking space. The man who killed Johnson was out on bail — six months earlier, he had stabbed a teenager to death.

Ruth Donnelly, the mother of the teenager who was stabbed to death, helped Johnson-Speight found the organization.

Johnson, 24, had just been accepted into a Masters program in Delaware. He was planning to start school the following month. 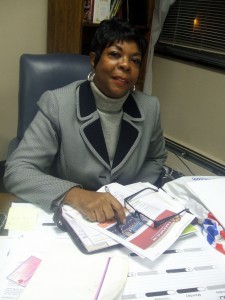 Dorothy Johnson-Speight is the founder and executive director of Mothers in Charge, an organization that provides support to women who have lost a loved one to violence. Johnson-Speight founded the organization in memory of her 24-year-old son, Khaaliq, who was murdered over a parking space. Photo by Jasmine Brown

This was not the first time Johnson-Speight had lost a child. Her daughter, Carlena, died when she was 3 years old from bacterial meningitis. Johnson-Speight said that after the death of her children, her life was changed forever. She still attends counseling from time to time.

“You don’t even look at life the same way,” she said. “I guess what things were important to you before are no longer as important. Things that maybe didn’t mean much to you before mean a whole lot to you now. The friendships that you seek now are different and more meaningful in terms of purpose, living on purpose. You are changed forever.”

After the death of her son, Johnson-Speight made a conscious decision to live on purpose. She used the funds from a life insurance policy her son had to fund Mothers in Charge in his memory.

“I am a better person as a result,” said Johnson-Speight. “Nobody wants to lose their children to be a better person or understand life in a more meaningful way, but that is what truly has happened.”

The group’s beginning was humble. Initially, Mothers in Charge worked out of Johnson-Speight’s home. To raise funds, they held fish fries and bake sales and went door-to-door to gain support.

Now, Mothers in Charge is a household name in Philadelphia. In a little more than seven years, they have grown into a full-fledged business. Today, they are funded through grants, money from state representatives and local fundraisers.

Johnson-Speight is the executive director of Mothers in Charge. To the women employed by the organization, she is more of a den mother than their boss. Her black and white, jewel-encrusted BlackBerry is never far from her reach. They are always on her mind and she sends them constant texts and e-mail messages to check on them.

Johnson-Speigh said her faith, her work and the women in the organization keep her going, helping to sustain her in the aftermath of her son’s death and support her as she counsels grieving women almost every day.

The fight against crime is a never-ending battle and the names don’t stop coming in. Every Wednesday, the homicide list is placed on Johnson-Speight’s desk. The spreadsheet, which comes from the police department, provides the details for the previous week– the date of death, the name of the victim and the type of weapon used, usually a gun. There are about five to eight names every week, Johnson-Speight said.

Their membership is growing. It is the type of organization that no one wants to have to join and that everyone is glad exists. With every new victim, there is a family that needs support. The police provide the organization with contact information for the victim’s family.

Deborah Grant-Cook, 61, is responsible for sending out sympathy cards and information about the services and grief support offered free of charge by the organization.

“When I see that list that comes through, I am amazed,” Grant-Cook said. “You hear it on the news, when you turn on the news that is all you here. But then to see it up close and personal on paper, and then the ages of these youngsters, it’s a bit rough.”

Homicide is the leading cause of death among black males between the ages of 14 and 24.

“I see it as a health issue,” Johnson-Speight said. “I believe if some other cause of death was killing say white males 14-24, if it was some kind of incurable disease, we would be trying to find all kinds of vaccinations, vaccines or some type of cure to save those lives. Unfortunately, homicide is not an incurable disease, and there is no vaccine for it. But it is by the same token taking the lives of African American males at an alarming rate.”

Many think that Mothers in Charge is just a group of angry mothers who go out into the city to grieve and shout about violence, according to Johnson-Speight, but that is not all that they do, she said. Rather, they are trying to fight violence from all sides, using education as their foundation.

Mothers in Charge goes into the prison every Monday and Wednesday to mentor these young men. The mothers try to teach them how to change their mindset on violence. They tell the stories of their own loss and teach the boys about love and self respect. In order to prevent the boys who return home from going back to crime, the organization pairs them with older males who have gone down that same path and managed to turn their lives around.

Donna Giddings, 48, is one of the mothers who work with the youths at Carson Valley and PICC. She joined Mothers in Charge after her mother, her son, and her son’s best friend were murdered in a triple homicide in North Philadelphia. Working with the organization helps Giddings to keep her mind off of the pain, and she really loves working with the young men in the program, she said.

“When I look at them, I see my son,” she said. “Because I worked so hard with him and he was in and out of trouble — he was in placement twice. The last time he came home, five months later he was killed.”

Giddings says that Johnson-Speight and the other mothers in the organization have been a real comfort to her. She calls the organization a sisterhood. They support one another, even on the anniversaries of the death of their loved ones.

“It lets me know that what I am feeling and what I feel on a daily basis, on a regular basis, there is someone else that understands,” Giddings said. “Because to most people, it is like, ‘Oh my God, there she goes,’ or, ‘Oh God, how are you making it?’ But these Mothers understand, you know. They understand what we go through when we are sad, when we cry, because they can relate — they know what it feels like to lose a child.”

Johnson-Speight says that she is blown away by the work of the organization and the amount to which it has helped individuals.

“There are several mothers who I thought when I first met them that they just wouldn’t survive, that they would just be a basket case,” she said.

She mentioned Giddings in particular. She said that when Giddings first to came to Mothers in Charge, she was broken.

“When she came I said, ‘I don’t know how she is going to survive.’ She had a double funeral where she buried her mom and her son and it was just her 12-year-old daughter that was left,” Johnson-Speight said. “And today I see her and it is just amazing how she has grown. She has given back so much and is really making a difference. “

Johnson-Speight does not take all the credit for the organization. She says that it is not just her that has made Mothers in Charge a success.

I know it’s not just me. I know it’s God,” she said. “I know it’s like an intervention that is beyond me, beyond any human kind of, ‘OK, I am going to go and just do this.’ I believe it is our children that are looking out for us and rooting for us saying, ‘You go mom, we gon’ help you with this’ — our little guardian angels. I believe it is God. I believe it is the commitment of the women. It’s all of that; it is just amazing.”

Johnson-Speight says that the work is hard. Her schedule is often filled with rallies, one-on-one grief counseling, and all types meetings. Oftentimes, she works until 7 p.m. or 8 p.m.. But she believes in the fight against violence and that Mothers in Charge is making a difference.

Her son Khaaliq is still never far from her. His picture hangs behind the desk in her office and on one of the walls hangs with containing more pictures of Khaaliq. It reads, “His Love Surrounds You, Always!” Johnson-Speight calls him her guardian angel.

She looks forward to the Wednesday that no names come in on the homicide list. She believes it is possible.

“That is what I get up every morning believing. That is what drives me. That we are going to get there,” Johnson-Speight said.

These women are doing are great job and need to be recognized for their efforts.

Such a heart wrenching story. I agree with the prior commenter Shelia. These women should be highly commended for reaching out to others. May they be strengthened and blessed for all their hard work. Thank you writer for bringing such a story to our attention. Good job!

i really appreciate your work