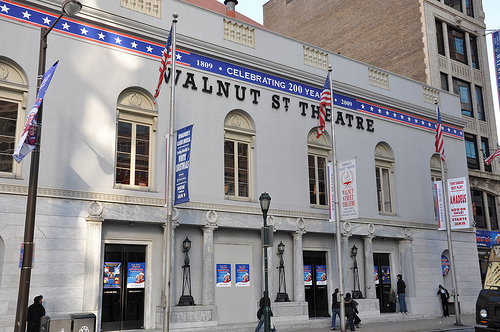 Advertisements for Irving Berlin's "White Christmas" can be seen adorning the exterior of the Walnut Street Theatre at 825 Walnut Street in Philadelphia, PA. The thriving venue has seen over 200 seasons and is the oldest theatre in the country. (Photo by Ryan Chavis)

PHILADELPHIA- Unapologetically charming in nature and replete with seasoned Philadelphia and New York talent, Irving Berlin’s “White Christmas” is packing them in nightly at the Walnut Street Theatre.

The production is quickly becoming another piece of the foundation that has made the venue a luminous and thriving presence in the city’s performing arts community. The theatre has seen a respectable roster of esteemed actors—Jessica Tandy, Robert Redford, Audrey Hepburn and Lauren Bacall, to name a small fraction—grace the stage over the years. Now in it’s 202nd season, the Walnut Street Theatre in Center City, near South Broad Street, gives truth to the adage “getting better with age.”

Rebekah Sassi, Director of Institutional Advancement for the Walnut Street Theatre, is ebullient with the response that “White Christmas” has garnered from audiences.

“There’s a real nostalgia and currentness with the show,” Sassi said. “It’s getting huge word of mouth.”

Word really gets around in Philadelphia, with many shows playing to full houses. Yet, even before “White Christmas” opened, the theatre has received enthusiastic response from numerous productions ranging from their interpretation of the iconic musical “Les Misérables” in 2008, to the recent production of “Curtains” that ran from Sept. through Oct. 2010. Although the theatre community is diverse as a whole, the Walnut Street Theatre holds a special place among them all, and for good reason.

The Walnut Street Theatre boasts 49,000 season subscribers—the largest subscription base in the world.
“When we run seven weeks with a production, we run at 85 to 86 percent capacity to begin with,” Sassi said. “So that does lead to really great, wonderful full houses.”

The current number of subscribers is down from an all time high of 52,000 several years ago. It’s not a significant drop, Sassi said, but they continue to try and make up for the differential. The theater also has a very high renewal rate.

“We renew at 82 percent,” Sassi said. “Even so, that leaves us with 10,000 new subscribers to identify, cultivate and sell going into every season.”

Sassi said that the present state of the economy has made it even more important to be mindful of spending on the administrative end. She cited the fluctuation of health insurance rates for theatre staff as an example of analyzing expenses on a yearly basis.

“What rate increases do you anticipate are going to come in 2011 and 2012?” she said. “How do you mitigate those increases to provide your wonderful staff with the greatest level of benefit that you can?”

Although the squeeze of the economic recession affects certain business elements at the Walnut, it by no means smothers the artistic vision that the creative staff brings with productions like “White Christmas.”

“The last thing we can do is retrench in terms of artistry because it leads to a very bad downward spiral, so you have to maintain that level of excellence on stage,” Sassi said. “You have to hire the best actors, the best directors — you have to make beautiful sets. You can’t scrimp on that sort of thing.”

By carefully managing expenses and being proactive in attempts to increase revenues, the staff has been able to invest in maintaining the historic landmark.

“We’re excessively proud of this historic building and the level of attention to detail that we’re able to pay with maintaining it,” Sassi said. “We do view ourselves as stewards to the building.”

The Walnut Street Theatre draws a large amount of its prestige from the city itself. Douglas Wager, head of the graduate directing program at Temple University, explained that Philadelphia was a notable figure in housing out of town “pre-Broadway tryouts” for productions in the twentieth century—many of which played at the Walnut Street Theatre.

“It has a long history of being a national center for the development of theater,” Wager said.

Many actors favor the Philadelphia theatre scene due to its location as well.

“Because of its proximity to New York City it has also become a place for artists who are very comfortable because they have access to the major theater scene,” he said. 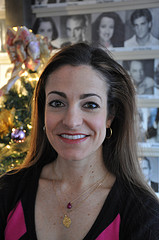 Actress Maggie Anderson poses in the lobby of the Walnut Street Theatre in Philadelphia on Thursday, Dec. 9, 2010. In addition to being featured in the ensemble of the venue's current show "White Christmas", she also teaches at Temple University (Photo by Ryan Chavis).

Actress Maggie Anderson, an ensemble member of the Walnut Street Theatre’s current tenant “White Christmas,” as well as its past productions of “Dirty Rotten Scoundrels” and “The Producers,” cites the nurturing quality of the city that fuels her artistic drive.

“There’s a lot of opportunity to be really broad as a creative artist,” Anderson said of working in the city. “I was surprised at the number of opportunities here for me to do different things that feed into my passion for acting and my craft.”

Still, out of hundreds of theater companies, the Walnut Street Theatre remains what many would consider the crown jewel of the community.

“I think of the theatre environment in Philadelphia as an ecosystem,” Sassi said. “I feel as if the Walnut is the reef and we really are providing a stabilizing, sheltering force for theatre and other cultural activities that happen in Philadelphia.”

After the glitz of “White Christmas” has faded away, the Walnut Street Theatre will embark on a new artistic endeavor. In 2011, it will launch an 18 city, seven state tour of Tennessee Williams’ “The Glass Menagerie”, marking the first time they’ve ever taken out a tour of their work.

“Touring is generally very expensive and you have to have cachet,” Sassi said. “I think with our 200th anniversary celebration we had a couple of years ago — our name recognition went up a little bit.”

No matter what new project the Walnut Street Theatre undertakes or the level of recognition they achieve, they’re intensely focused on their prime objective of supporting the city.

“The end goal, whether we’re creating something new or reviving something classic is to serve the community,” Sassi said.

Philadelphia Life: Walnut Street Theatre “getting better with age” | Memoirs of a Southern Transplant says:
December 17, 2010 at 6:11 am

[…] Walnut Street Theatre “getting better with age” This entry was posted in Uncategorized. Bookmark the permalink. ← East Village Residents Sound Off… LikeBe the first to like this post. […]