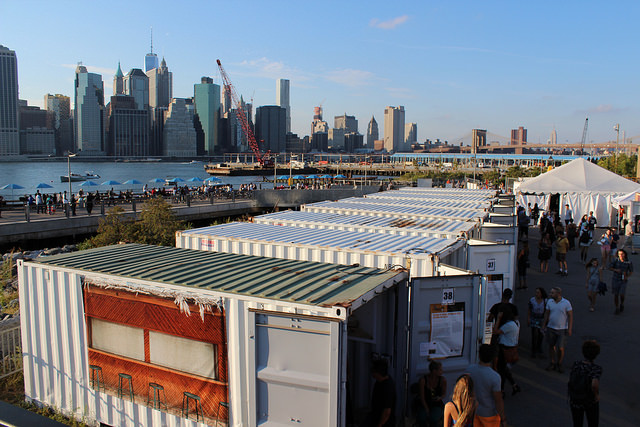 As an epicenter of trade and commerce, it is not uncommon to see shipping containers on the periphery of New York City. It is odd, however, to see several dozen of them used as a makeshift art gallery like the one currently arranged at Brooklyn Bridge Park.

United Photo Industries, a New York based art organization, is the impetus behind the maze-like structure of shipping containers and while the set up may appear haphazard at first glance, it is anything but that. It is Photoville, the largest annual photographic event in New York City.

Photoville challenges the public’s perception of art by organizing shipping containers to function as gallery spaces in which curated works by an array of photographers and photojournalists are displayed. As a free event that is open to the public, the untraditional space liberates the viewers from expectations often associated with museums and brick and mortar galleries.

“I live in the neighborhood so I’m familiar with the space here and there’s a lot of containers that are for industrial purposes,” said Ananda Khan, 33,a Photoville attendee yesterday. “It’s nice to see it fit in with the neighborhood and create a whole new ‘suspended from reality’ space.”

Khan’s fashion photographer friend, Adrianna Favero, brought her to Photoville to not only explore the images, but to get in tune with the political and social climate of photojournalism.

“All of these are things that you don’t think about in your regular life,” said Favero of the themed installations showcasing issues like police brutality and war,.

“Most people don’t realize that it’s something that happens all around us even in our city,” said Gamble.

The Coalition hired a photographer to capture portraits of various survivors, politicians, and even celebrities that are standing up and taking steps to help those affected by human trafficking.

“This is a great way to get the general public to notice our thinking about it and it’s given us a good chance to have conversations with people who had never thought about the issue before,” said Gamble..

This year marks Photoville’s fourth annual event which runs for two consecutive weekends in mid-September. It has gained traction since its inception having spread among the photography community even drawing former visitors to exhibit their work, such as photojournalist Rita Leistner who made her way from Toronto, Canada.

Leistner’s shipping container showcased photographs that she took on a smartphone while embedded with U.S. Marines in Afghanistan in 2011. Leistner was part of an experimental project titled Basetrack, which was an initiative to cover the war in Afghanistan using solely social media and smartphones. 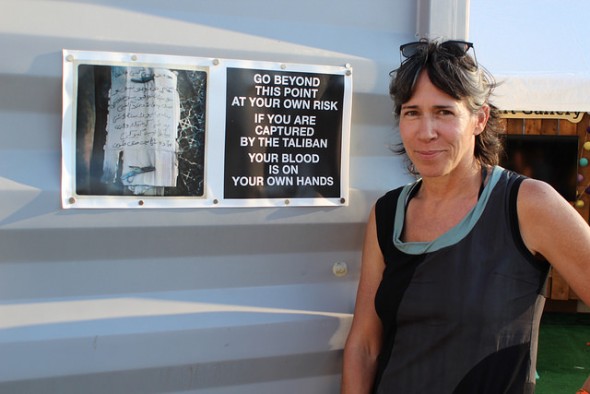 Photojournalist Rita Leistner pauses for a moment at Photoville outside of a shipping container that showcases the work she photographed entirely on her smart phone while embedded with U.S. Marines in Afghanistan in 2011. Photo by Elizabeth Arakelian

In an increasingly digital world critics have wondered about the future of photography’s role now that the masses have become self-appointed photographers by virtue of their phones. According to Leistner the advent of phone photography does not degrade photojournalism or photography as an industry, but rather  “raises the bar higher particularly in terms of how we understand photography and what it can evoke.”

Judging by the thousands of people filing in and out of the shipping containers at Photoville over the past two weekends, it is clear people are still interested in glancing up from their phones to enjoy the physical photographs before them.

“Photoville, as a physical space that contains both material object images and people, is the joining point of these things and the fact that more than 70,000 people came through last year… to me that is evidence that my optimism about the future of photography is justified,” said Leistner.