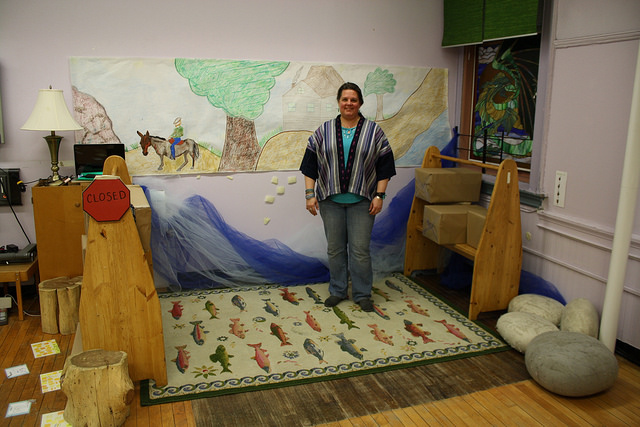 Elizabeth Carlson stands in her pre-k classroom on the Upper West Side. By Zoe Lake

Elizabeth Carlson stands in her pre-k classroom on the Upper West Side. By Zoe Lake

When New York City public schools open their doors next September, they may be opening their doors for nearly 55,000 prekindergartners under Mayor Bill DeBlasio’s proposed expansion of pre-K, and experts say, for opportunities to close the achievement gap.

“The more exposure a child has to safe and social settings from a young age the more exposure they have to opportunities, and early language skills predict academic achievement. Kids with poor language skills don’t do well,” said Dr. Christina Reuterskiold. a language development specialist and speech pathologist. Her research at New York University focuses on language disorders in young children. 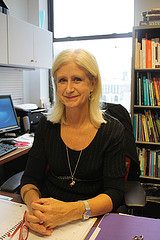 The widening achievement gap http://www.edweek.org/ew/issues/achievement-gap/ has become a concern for educators and policy makers alike, especially in large cities like New York, where wealth disparity among residents has been linked to gaps in academic achievement. De Blasio has made it his personal crusade to expand pre-K across the city to ensure that all kids have access to safe, reliable education from an early age.

But the logistics of a universal pre-k program have become muddled in funding talks. Gov. Andrew Cuomo has proposed expanding the program with funding from the state budget, while De Blasio would prefer to raise money by implementing a new tax on city residents making over $500,000 a year, a tax Cuomo is hesitant to put in place during an election year. Neither plan has been ruled out with the state budget expected to be released on April 1st. No matter where the funding comes from, educators are united in their belief that pre-k would overwhelmingly benefit the city’s school children.

Elizabeth Carlson, 44, of Morristown, NJ, is a pre-k educator at the Hollingworth Center, on the Upper West Side. The Hollingworth Center is located within Columbia University’s Teachers College and not only provides education to young children, but to young teachers who wish to get real world experience in a pre-K setting. Carlson, who teaches both children, and educators, believes it’s time for people to take early childhood education seriously,

“Play is the work of children, it is very serious, and very elaborate,” she said. Pre-k programs “give children the opportunity to develop a sense of self, take safe risks, and be challenged,” all foundations integral to success later in a child’s educational life.

Anna Suh, 42, of the Upper East Side, has a 5-year-old son in Elizabeth Carlson’s class. Suh, who believes strongly in the idea of universal pre-k, says her son’s time spent at the Hollingworth Center has helped him to become more articulate and creative. Next year her son will enter kindergarten, a move she thinks Hollingworth has helped him prepare for, despite a history of difficulties with transitions.

“I think my son is definitely prepared, but he is also very privileged. If [pre-k] has made that big of a difference for someone like him, who has educated parents, and a stable home environment, I can’t imagine the difference it would make for someone who doesn’t have these advantages at home,” said Suh. “If a child is not getting an education and encouragement in the home then where else will they get it but at school?”

Studies carried out by experts at Princeton, Stanford, The National Association for Children in Poverty,and The National Association of Elementary School Principals, among others point out that the achievement gap begins before traditional schooling, and many impoverished and minority children who miss out on education in the home from a young age enter kindergarten well behind their more affluent peers.

While exposure to literacy and learning at home is important, experts agree when children are introduced to a classroom setting at a young age, they are apt to develop the socialization skills needed to succeed later in life. In addition, educators at the pre-K level are given the opportunity to observe very young children in a controlled situation often allowing for early detection and intervention in instances of language and developmental disabilities.

Extensive pre-k programs have proven successful in other states and cities like New Jersey and Washington DC, where pre-k is essentially universal. Curtis Andrews, 38, of Washington DC, is a pre-K educator in in the DC area. He believes his understanding of the importance of early childhood education has increased with each passing year he has taught.

“It is important not just for children, but for parents who we work with to find strategies and solutions for dealing with behavioral and learning issues outside of the classroom,” he said. “That’s the part that’s more meaningful than learning to write, we are a community for these children and their families.”

Andrews, like Carlson, works hard in conjunction with other educators to develop curriculum that suits the needs of his students. While pre-k activities may seem like a lot of song and dance to outsiders, curriculum is laced with important lessons meant to facilitate self-expression, problem solving, spacial relation, and body control-lessons imperative for students’ success moving forward to kindergarten, a move that can be a lesson in itself.

In her classroom last year, Carlson introduced her students to a unit on the puffin, a South American migratory bird whose life cycle provided a template for understanding their upcoming ‘migration’ to kindergarten.

“We try to form connections from one unit to another,” she said. “Children are responsive to understanding connections in their own lives. Pre-K is all about possibility, the possibility of developing a child’s foundation for learning. I am constantly impressed with what my students are capable of taking on.”

If the goal of the “proposed expansion of pre-K” is to give these children more opportunities to reach their potentials, the program may be successful.

However, if the goal of the program is a significant and sustained narrowing of the achievement gap, the program will almost certainly be unsuccessful.