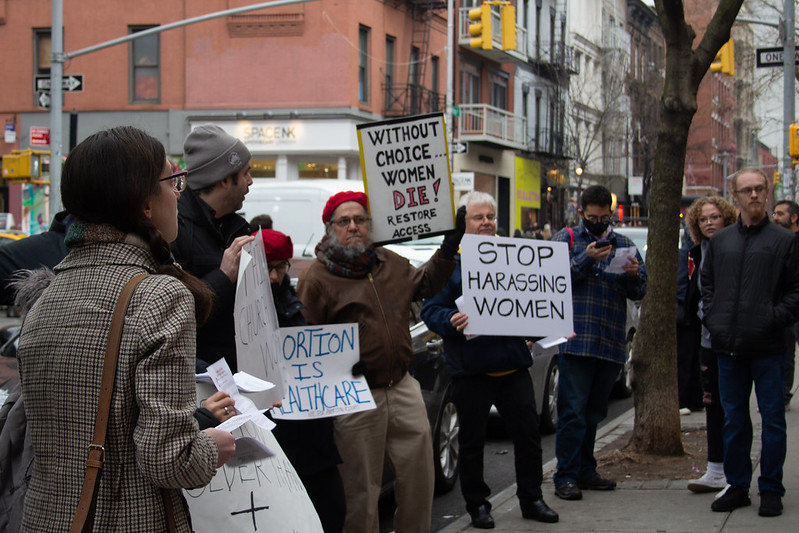 Abortion rights activists  want to stop a tour group from working with the Basilica of St. Patrick’s Old Cathedral in Nolita, which offers monthly anti-abortion masses and marchers to a nearby Planned Parenthood.

Holding signs that read “stop harassing women” and “abortion is healthcare,” about a dozen demonstrators gathered on Prince Street yesterday. They said the cathedral assembles church-goers to “harass” patients in the Planned Parenthood clinic.

“This church has been getting a free pass for many years to send hundreds of people down the street to Planned Parenthood to harass people trying to seek abortions,” said protestor, Christine Pardue, 27. “They get a pass because this kind of behavior is pretty normalized in our culture. It’s seen as normal to intercept women trying to get inside a clinic.” 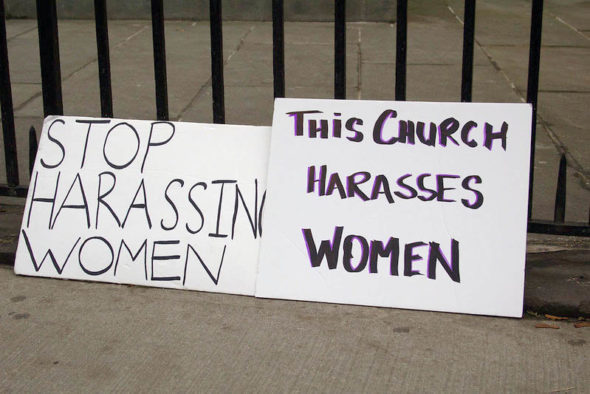 Pro-abortion demonstrators near the Basilica of St. Patrick’s Old Cathedral held signs like these and placed some on the sidewalk. Photo by Amanda Perez Pintado

The first Saturday of every month, the Basilica of St. Patrick’s Old Cathedral holds a Witness for Life mass that is followed by a procession to the clinic. At Planned Parenthood, parishioners pray for the lives of babies and mothers.

The protestors called on Tommy’s Tours to cease offering the Catacombs by Candlelight Tour and reconsider its relationship with the house of worship, arguing the company should not support a cathedral that “humiliates” Planned Parenthood patients.

The protest was organized by New York City for Abortion Rights. Bracing the cold, demonstrators chanted “not the church, not the state, women must decide their fate” and “our bodies, our lives, our right to decide” as they handed out flyers.

Two people, who identified as pro-life, responded to the demonstrators’ chants with “babies have the right to live,” “protect the children” and “don’t mutilate the children.” Standing near the demonstrators and mostly ignored by them, the pair remained for the duration of the protest, which was about 40 minutes, and left quietly.

Pardue, who has been involved with the group since 2017, said reproductive and sexual health services are currently at risk and pointed out that the outcome of the U.S. Supreme Court case June Medical Services L.L.C. v. Gee could impact access to abortion across the country.

“We’ve lost so much ground at this point,” said Pardue, a Brooklyn resident. “But we believe in radical autonomy in this issue. Women, anyone who can get pregnant, can make up their minds about whether they want to carry a pregnancy to term or not. We are opposed to any forced birth, period.” 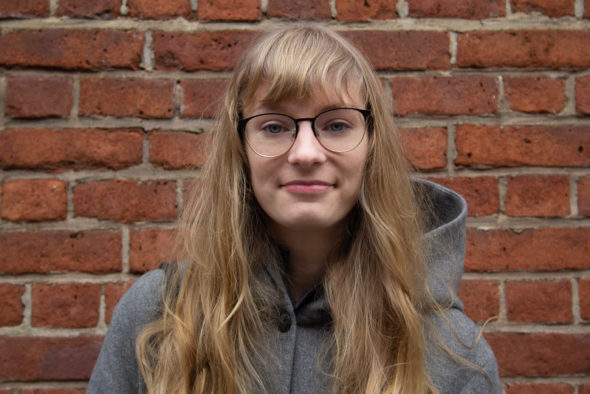 Christine Pardue, 27, has been involved with New York City for Abortion Rights since 2017. Photo by Amanda Perez Pintado

Megan Lessard, 32, agreed that the right to abortion is in danger in today’s political climate, expressing concern that the decision in June Medical Services L.L.C. v. Gee could essentially erode access to the reproductive health service.

“Bodily autonomy is a fundamental human right,” said Lessard, who lives in Crown Heights, Brooklyn. “And that’s it.”

Evra Cohen, 68, has advocated for the right to abortion since 1968. He said reproductive rights have been obliterated in some parts of the country, mentioning that some states have only one abortion provider.

According to the Guttmacher Institute, which advocates for reproductive rights, 25 new abortion bans had been signed into law, primarily in the South and Midwest, by the end of 2019.

Cohen described Planned Parenthood’s work as vital and emphasized that the nonprofit organization not only provides abortions but also a variety of reproductive health care services, such as breast exams and health services for men.

“As a man, this isn’t only a women’s issue,” said Cohen. “This is a human issue and it’s about human rights.”

The Basilica of St. Patrick’s Old Cathedral did not respond to requests for comment.