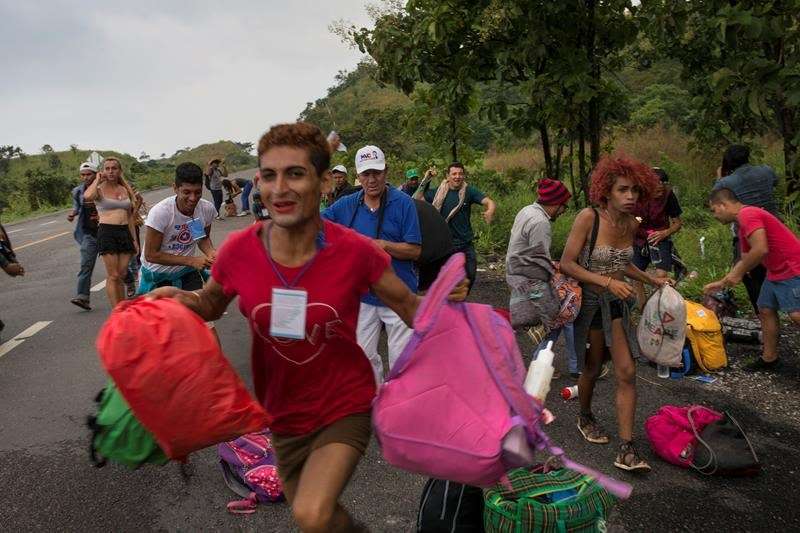 Members of a LGBTQ group who are traveling with the Central American migrants caravan hoping to reach the U.S. border, run towards a truck who stopped to give them a ride, on the road to Sayula, Mexico. Much of the trek has been covered on foot, but hitching rides has been crucial, especially on days when they travel 100 miles or more. For the LGBTQ group, it’s been tougher to find those rides.  AP Photo/Rodrigo Abd  courtesy of the thecanadianpress.com

Katherine Franke is a Sulzbacher Professor of Law, Gender, and Sexuality Studies at Columbia University. She’s considered to be one of the “nation’s leading scholars writing on law, religion, and rights” and has written books on topics such as abolition and reparations. Now, Franke is joining a different distinguished group of Americans, she and her partner have decided to sponsor an asylum seeker, a young trans woman from El Salvador. They will take her in and be responsible for her until she is given permission to permanently reside in the country.

The woman, Ana, not her real name,  was being held in Tijuana when Franke met her. She was with a group of Columbia students volunteering with Al Otro Lado, an organization the provides legal assistance to migrants on both sides of the border when she met Ana and heard her story.  Ana told Franke about severe abuse she fled in El Salvador and then endured in Tijuana when she was sent there by the U.S. government. She says she was beaten and terrorized by drug cartels and the Mexican Federal Police.

“She had been into the clinic a couple of times, one of the other lawyers there had done an intake with her and had just been completely flattened by the story,” Franke explained. “We sort of took her under our wing when we were there, and get her ready as possible before she was put into detention.”

Sponsoring asylum seekers is not an answer to the number of people who are trying to enter the country, but it has been a method of welcoming refugees from into the U.S. from other parts of the world in times of crisis. Traditionally, sponsors were not private citizens like Franke – it was religious groups. According to a report from the Catholic church, they resettled 1.1 million refugees in the United States between 1987 and 2016.

Under a Trump administration policy (“Remain in Mexico”) that started in late January, Central American migrants from Guatemala, Honduras, and El Salvador, are sent back to Mexico once they reach the U.S. border, to wait while their asylum claims are processed. In March, when Franke met Ana, it was projected that nearly 100,000 people  tried to cross to the U.S. – Mexico border just in the month of March.

Sponsoring asylum seekers is not an answer to the number of people who are trying to enter the country, but it has been a method of welcoming refugees from into the U.S. from other parts of the world in times of crisis. Traditionally, sponsors were not private citizens like Franke – it was religious groups. According to a report from the Catholic church, they resettled 1.1 million refugees in the United States between 1987 and 2016.

Franke did not become a sponsor through a religious organization, but instead through a non profit called Showing Up For Racial Justice. The group runs a program that supports “folks on the caravan by connecting them with volunteer sponsors in the U.S. in order to give them a chance to get out of detention and plead their case for asylum,” according to their website.

It was clear to Franke that Ana was facing incredible odds, and Franke was reminded  of the case of Roxana Hernandez, another trans woman who died in ICE custody in 2018. After weeks in Tijuana, Ana’s number was called – she would be moved to the San Ysidro, San Diego, CA., Customs, and Border Protection processing and detention facility – the same facility that held Hernandez before her death.

Franke decided to become Ana’s sponsor, responsible for her legal resettlement in the U.S. – she filled out the paperwork and will be responsible for everything from finding her a place to stay, to help with medical care, and bringing her to court appointments. When Ana entered detention she had Franke as a sponsor and a man named Jose Campos as her attorney. Campos spent the first week of Hernandez’s detention trying to find a way to get in contact with Ana. They hoped that because Ana had what so many did not – representation and sponsorship – that she would be processed and released quickly. Instead, she has been detained since she was taken from Tijuana.

“The biggest reason why we want to get them out of there is that they’re not being recognized as trans women, they are being put in with the men,” said Meredith Vina over the phone.

Vina is a trans woman living in San Diego. She and her wife Eleanor are both retired, and they have been able to visit Ana in detention.

“For example, we went to see Ana* today and she was in a room with five other men. Now, fortunately for her, we talked to her and we said: ‘Are you okay? Do you feel safe?’ And she said that the men were respecting her and actually respecting her pronouns so far.”

Vina not only visits Ana in detention – she is also sponsoring a trans woman seeking asylum from Central America.

“The way I got involved – It was just all these caravans coming up to Tijuana, and having friends getting involved in going down there and bringing supplies,” Vina said. . “Getting to the point where we said ‘How can we get these people to the United States?’”