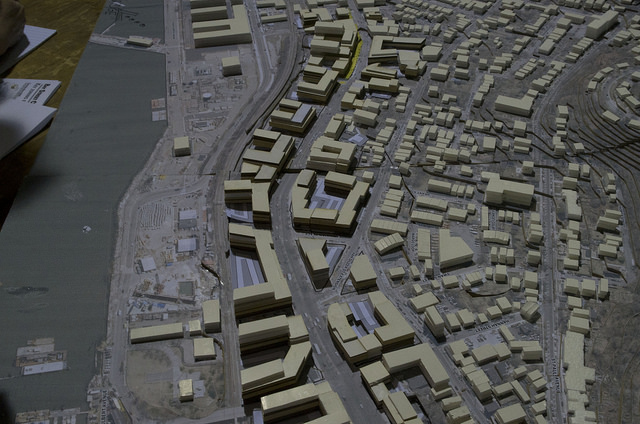 The New York City Department of City Planning’s model of the proposed rezoned Bay Street Corridor. The buildings on the left are intended to be taller-scale residential units with a percentage of units set aside for affordable housing. Photo by Dale Isip

Wearing glasses and a fitted cap, Ephraim Diggs sat relaxed at a table in a busy Staten Island presentation hall waiting to hear about the rezoning plans that would bring big changes to his borough.

“I’m giving it another year,” Diggs  of Staten Island said. “If I see that it’s getting overcrowded, I’m moving, I’m getting out.”

But  New York’s current rezoning plans for affordable housing extends far beyond the borough. Staten Island is just one part.

On February 18th and 20th, residents of Staten Island’s North Shore – those of the Tompkinsville, St. George, and Stapleton neighborhoods – listened to presentations on the area by the Department of City Planning (DCP) and the New York City Economic Development Corporation (NYCEDC) and participated in question-and-answer sessions for a zoning area one-half mile south of the Staten Island Ferry Terminal, what city agencies refer to as the “Bay Street Corridor”.

“There is a billion dollars worth of public and private investment coming to this neighborhood now,” said Len Garcia-Duran, director of DCP’s Staten Island office, “We’ve got an opportunity for new residential within walking distances of the ferry terminal in downtown Manhattan, that would attract a lot of folks who are being priced out of Manhattan.”

The area extends from Victory Boulevard in Tompkinsville to Sands Street in Stapleton. The area has a significant width, as it spans between Bay Street and Van Duzer Streets, two thoroughfares on Staten Island’s North Shore. It is currently a manufacturing district, and has been since 1961. City agencies including the DCP and the NYCEDC have held several meetings with the public in regards to proposed changes to the area’s development zone status.

The Bay Street Corridor from Pavement Pieces on Vimeo.

A key issue around the rezoning is the conflict between what residents see as a potential for gentrification and over-development, combined with the city’s insistence that the rezoning would provide required affordable housing in the area.

In 2005, the neighborhoods of Williamsburg and Greenpoint faced a similar proposed rezoning. Residents of those neighborhoods negotiated a residential neighborhood and park zone, out of a proposed power plant. But  according to some residents, the city has not held to its agreement to set aside adequate park space for the area. Those neighborhoods have since been a place of residential development, albeit with a significant population increase.

“The Williamsburg-Greenpoint rezoning is now held up as what not to do, how not to rezone a community.” said Jens Rasmussen, a community activist and resident of Greenpoint. “If the rezoning is anything like what’s happened here, it will irrevocably change the character of your neighborhood.”

Under Mayor Bill de Blasio’s Mandatory Inclusionary Housing plan, developers building in rezoned areas would be required to set aside a certain percentage of new units for affordable housing. Because of a community-level resistance to high-density developments, the plan has been rejected at the borough board level on Staten Island. It is also currently facing opposition in the New York City Council for similar, though not entirely identical reasons.

The rezoning phenomenon is currently city-wide, to accommodate for Mayor de Blasio’s proposed 200,000 units of affordable housing. The recent rezoning of East Harlem, for example, is indicative of a process that took months to accomplish.

Back in Staten Island, some residents fear development will affect rent and the nature of businesses in the area.

“At the moment [the Bay Street Corridor] is underutilized, so I think it would be nice to see that strip be more active,” said DB Lampman, artist and co-founder of Staten Island MakerSpace in Stapleton. “We just don’t want to see all the manufacturing being lost.”

In conjunction with projects such as the currently developing New York Wheel and Urby Staten Island, other residents saw the potential for traffic and population density issues along a rezoned Bay Street Corridor.

“I live over there by the ferris wheel – they’re renovating our lot, and they’re renovating the ferry,” said Diggs, a St. George resident. “There’s a lot of building going on. I understand what they are trying to do, to build and upgrade, but in the long run there is going to be overcrowding.”

Some residents don’t want to see this happen on Staten Island.

“I think this Mayor wants more affordable housing,” said Ed Pollio, co-founder of the 5050 Skatepark in Stapleton. “My concern is, if he’s reelected, is he going to push this through without community support? … I don’t think Staten Island is ready for what’s going to happen on the North Shore.”