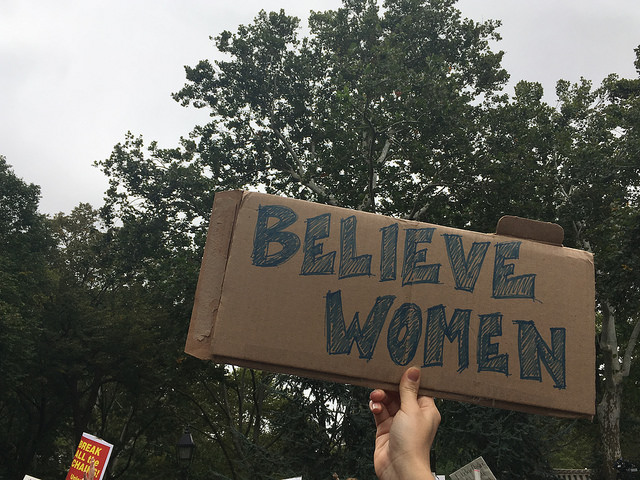 Protesters highlighted the importance of believing women as they gathered in Washington Square Park prior to Brett Kavanaugh’s confirmation to the Supreme Court. Photo by Kerry Breen.

Protesters highlight the importance of believing women as they gathered in Washington Square Park prior to Brett Kavanaugh’s confirmation to the Supreme Court today. Photo by Kerry Breen.

Hours before Judge Brett Kavanaugh was confirmed to the Supreme Court today, about 200 protesters gathered outside of Washington Square Park and mourned the battle they knew was lost, but pleaded with New Yorkers to vote in the upcoming midterms.

“This is a hot mess time,” said the Reverend Doctor Jacqui Lewis, a senior minister at Middle Collegiate Church in the East Village. “Never, never have I experienced this.”

Lewis said that while the current situation looked bleak, Americans have been here before, and know that voting is the only answer.

“We know what to do,” she said. “We know how to pray with our feet. We know how to withhold our vote from all the folks who are taking money from the NRA, who are putting our children in cages, all the folks who believe in incarcerating (f0r) weed, for God’s sakes. Pay attention, let’s vote, and do not let your hearts be troubled. Instead, turn your rage into action.”

Women protestors spoke emotionally, sometimes shouting through tears, speaking to the crowd through a megaphone. Dozens held signs protesting Kavanaugh and the current administration, and a few led chants which included “Believe the women,” and “Find another nominee.” Others shared their own stories of assault and trauma, and were comforted and cheered on by the crowd.

Several speakers implored those in the crowd to vote and proactively support candidates in the upcoming midterm elections by canvassing and campaigning.

“The best thing for your mental health right now is proactive coping,” said psychologist Victoria Barry, who holds an elected seat on the Democratic County Committee. “I think voting is the most powerful and immediate way we have to change the course of the country in a very fundamental way. Not nearly enough people do it. It’s the only way we have to fight back legislatively, as people who are not government officials.”

Barry also encouraged protestors to do more than just vote, particularly highlighting buses organized by ActBlue, which travel from New York City to canvass throughout the rest of the state. 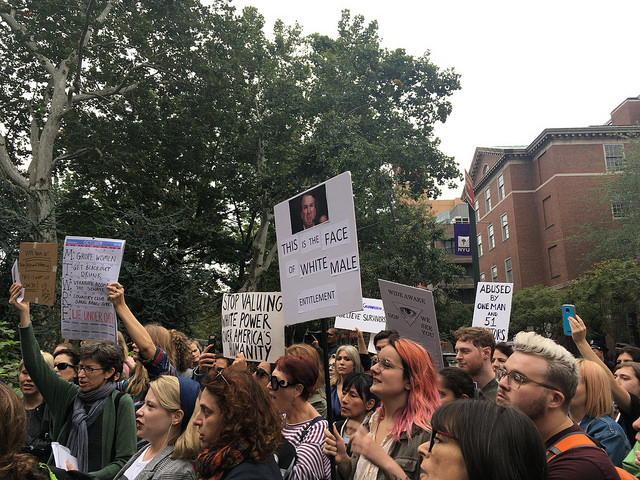 Protesters included images of Brett Kavanaugh during his testimony on their signs during today’s Washington Square Park protest. Photo by Kerry Breen.

Others at the protest passed out voter registration forms. Another speaker, Sarah O’Neill, spoke about the organization Postcards to Voters, which sends hundreds of thousands of handwritten postcards across the country, encouraging recipients to vote for specific, usually progressive, candidates.

Lewis, who has attended and been arrested at protests in Washington, D.C., added that voting is one of the most important steps New Yorkers could take in the upcoming elections, and said that people will be able to register to vote outside of the Middle Collegiate Church every Sunday until the election.

“What I want to say to New Yorkers is, if you haven’t registered to vote by now, run,” she said. “Run to the computer where you can do it easily. We only have until October 12th to do it. Two, to read, and educate ourselves on where the races are close. Find the news source that works for you. Pay attention to the races that are close, and send your money to the candidates that stand for what you believe. Find your issue and stay with it. Vote for the common good. Vote, vote, vote.”

Several people at the rally, including those involved with local grassroots organizations, agreed that they had seen an increase in engagement from the general public since the 2016 election, even among themselves.

“I hadn’t been paying attention to who was my state senator, to who was my state assemblyman, until the 2016 election,” said Allison Mingus, who serves on the executive committee of the Central Brooklyn Independent Democrats. “I think more people are motivated now, more than ever, to get involved at a local level, and that’s what changes things.” 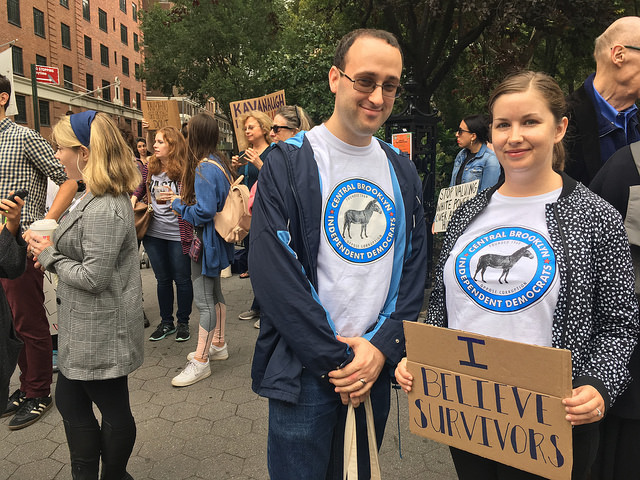 Ben Theodore said more people seem to want to work on get out the vote efforts.

“For this past September primary, the number of people who would walk through the door and say “I have never canvassed before, I haven’t canvassed in 30 years, but I’m showing up now” – that is the sign of this is it, that it is hopefully going to be different this time,” said Theodore, who serves on the same committee as Mingus.

Gus Christensen, the Chief Strategist of NO IDC NY, a grassroots organization working to flip the New York State Senate from Republican to Democratic, said the placement of Kavanaugh on the court made it all the more critical for progressive Democrats to take control of the New York State Senate, so that critical legislature covering reproductive health and non-discriminatory measures can be passed.

“The elevation of Brett Kavanaugh to the Supreme Court presents a clear and present danger to Roe vs. Wade, and to the rights of women, of LGBT Americans, of immigrants and people of color.”