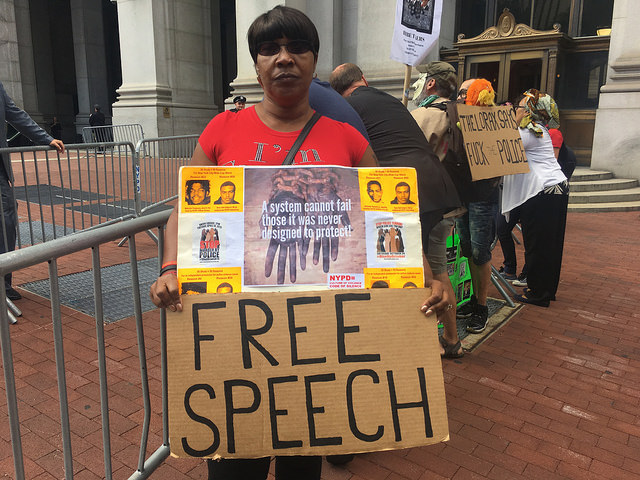 Donna Heyward, 47 of Brooklyn’s Gowanus Projects, said her stepson was killed by police.  She attended the protest at 1 Police Plaza  because she wants to stop police brutality she said grew under retiring NYPD Commissioner William Bratton. Photo by Cassidy Morrison

Margarita Rosario is angry. Her 18-year-old son and his cousin were shot 22 times and killed by police in 1995. She has been fighting for justice in the courts since that night, and she blames retiring NYPD Commissioner William Bratton.

Rosario of the Bronx, stood with a modest group of protestors just feet from hundreds of NYPD officers at Bratton’s retirement ceremony yesterday  fighting for their voices to be heard over praise for Bratton. Rosario said Bratton’s controversial policing methods were to blame for an increase in police brutality and deaths.

Rosario’s son Anthony, was shot 14 times times, mostly in the back and side in the Morris Heights section of the Bronx in 1995. At her feet were various news stories and photos of the police brutality that has tarnished Bratton’s record. Bratton served in the NYPD from 1994-1996, and was reinstated by Mayor Bill de Blasio three years ago.

“When Mayor de Blasio put this criminal back into commission, it hurt me and other parents to see this man who has caused so many deaths”, Rosario said. “de Blasio didn’t care about the families. Again, he put Bratton in office. We just can’t get rid of this criminal.”

As Rosario spoke to the group, bagpipes sounded from across the plaza. The ceremony was set to begin soon, and more uniformed officers flooded in to honor their commissioner.

“I believe the blood that has been spilled in New York City has to do with Commissioner Bratton,” Rosario said fiercely. “They’re all corrupt, it doesn’t matter who places him. Corruption goes with police brutality.”

Detectives Patrick J. Brosnan and James Crowe were investing a robbery in a Bronx apartment in 1995 when they shot and killed Anthony Rosario and his cousin Hilton Vega, 21. A third suspect was wounded. Twenty-two shots were fired killing them both. Most of the shots hit the young men in the back. Family members said the men were face down on the ground when killed, but police say they were reaching for a gun. Police had responded to a call about the men stealing $50 from a neighbor. No charges were filed against police, but the families were awarded $1.1 million in a civil trial.

In his 46 year career as an officer, Bratton has served in Los Angeles, Boston and New York City. He resigned in July as the outrage over police brutality in the city increased.

Departments across the country imitated Bratton’s policies, including his “broken windows” policing, which held that violent crime could be deterred if police crack down on lesser crimes, such as turnstile jumping and graffiti.

Donna Heyward, 47 of Brooklyn’s Gowanus Projects, said she lost her stepson to Bratton’s policies in 1994 when he was just 13.

Heyward pressed herself against barricades separating her from NYPD officers congregated in 1 Police Plaza. She shouted expletives with tears in her eyes as officers, toting dogs and pepper spray, eagerly awaited the arrival of the famed retiring police commissioner.

“He should have never come back with his broken windows policy,” said Heyward. “I don’t see why they even let him come back in after the damage he did in the 90s.”

While the homicide rate declined significantly during Bratton’s tenure, criminologists concluded that focusing on more innocuous crimes had minimal impact on violent crimes. Homicides continued to plummet even after Bratton left the NYPD.

“It’s ridiculous how focused he is on neighborhoods where the underprivileged are living,” Heyward said. “Why do they harass these people? Why don’t they open up these communities and give youths something to do? They close every activity, they take everything away, to give themselves reason to have these kids arrested.”

While Mayor de Blasio has championed the protection of civil rights, the Inspector General for the NYPD has reported the department’s systemic singling-out of minorities, having received complaints including improper use of force.

“It’s all people of color,” Heyward went on. “We’re the ones who get it most. You open the news, you hear about the next black child who got killed because, ‘Oh, I thought he had a gun’.”

Some of the protestors held photos of loved ones, but others held  news clippings featuring Eric Garner, who was placed in a lethal chokehold by NYPD Officer Daniel Pantaleo in 2014.

Protestors from all five boroughs waited with Heyward across the plaza laden with signs plastered with faces of young New Yorkers who had fallen victim to police brutality in the 1990s.

“Not all cops who live around me are bad guys,” said Gary Phaneuf, 54, of Staten Island. “I got a guy next door to me used to be DEA and he cuts my grass. But the really bad ones, like Pantaleo killing Eric Garner, it’s terrible. The idea that these cops get away with murder, it’s just terrible.”

In a New York Times op-ed, Bratton boldly called himself a “reformer”, having changed the way NYPD officers interact one another as well as with nonviolent criminals throughout New York City.

“There are police reformers from outside the profession,” Bratton wrote, “who think that changing police culture is a matter of passing regulations, establishing oversight bodies and more or less legislating a new order. It is not…what changes police culture is leadership from within.”

While Bratton maintained that cops could change other cops, public opinion of the police and confidence in the NYPD has remained low.

The neighborhoods are home to largely migrants, African Americans and less privileged communities.