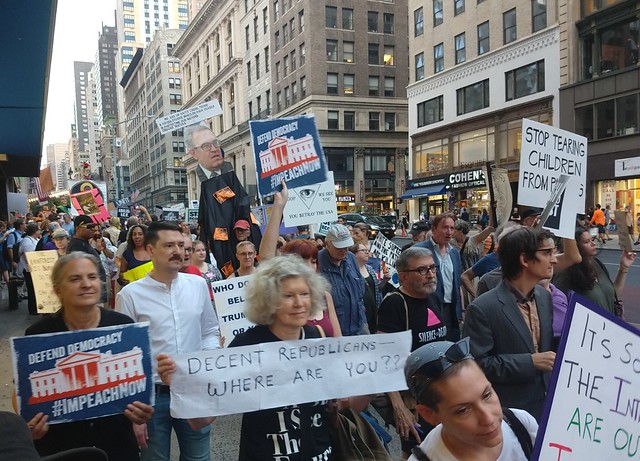 “I have been holding this sign through too many protests,” he said. “It is time for immigration detention centers to be shut down.”

Brenner considers the construction of the wall to be “a waste of money” and “cruelty for no reason.” His t-shirt read “Immigration Justice Now.”

“Thirteen thousand children are being held in prison in this country,” he said, referring to the migration crisis at the southern border. “These families are seeking asylum, and even if they are crossing without authorization, it’s a misdemeanor.” 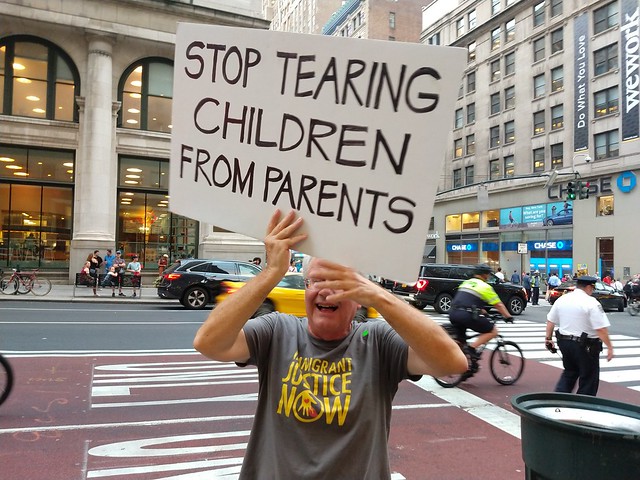 Bob Brenner marched in the anti-Trump rally yesterday in New York City.  He protested against detention centers in the souther border, implemented by Trump’s administration, with a two face sign which read “Reunite families” and “Stop tearing children from parents. Photo by Ximena del Cerro.

The march began at Bryant Park and ended at Washington Square Park. Protestors chanted, cheered and held signs mocking Trump and his presidency.

Trump came to the city to address the United Nations and tell world leaders to reject “globlism” and adopt his “America First” style of governing.

But for the protestors, his style is just not working.

Nilsa Cordero joined the protest on her walking aid scooter and held the flag of Puerto Rico, her place of origin.

“Puerto Rico has suffered, and he doesn’t think we are worthy of anything,” she said. Cordero described the current situation since Hurricane Maria hit the island in Sep. 2017, as “there is still no water; there are still problems with electricity,” she said. “We are against everything Trump has done.” 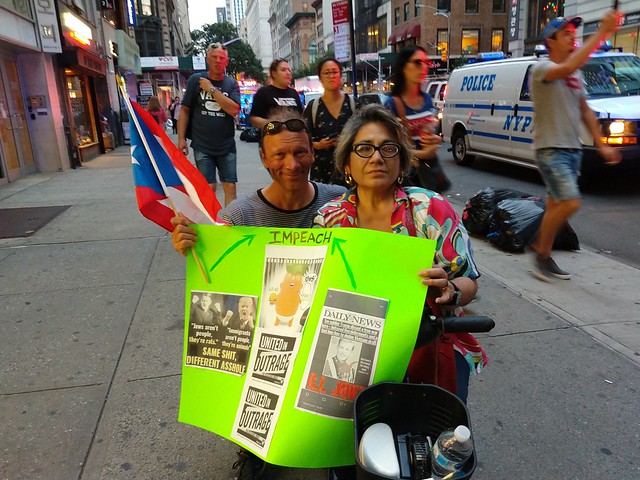 Nilsa Cordero, a native of Puerto Rico and her husband joined the march to protest the lack of action from Trump’s administration to relieve victims of Hurricane Maria.  Photo by Ximena Del Cerro.

Among hundreds of angry, sign-waving, chanting anti-trump protestors, a handful of President Trump’s supporters showed up.

“In Brooklyn there is a lot of people in the Muslim community, not those who have been here for 30 years, but the newer breed of people coming in, who seem to want to instill their ideology, and implement things that are counterintuitive to a constitutional republic,” she said.

Akins of Brooklyn, fears that immigrants will try to implement their culture here.

“It is not too much to ask, to want to know who is coming into your country, who are looking to stay, and if they want to be part of your culture,” she said.

Akins was a volunteer for Trump’s presidential campaign. After Trump’s first three years in the White House, she said her support “has been increasing.”

“Trump is building the wall,” she said. “There are other policies he is putting in place, and I think that is what he is going to continue to expand upon. His supporters, we want to see that, because we want to secure the sovereignty of this country.”