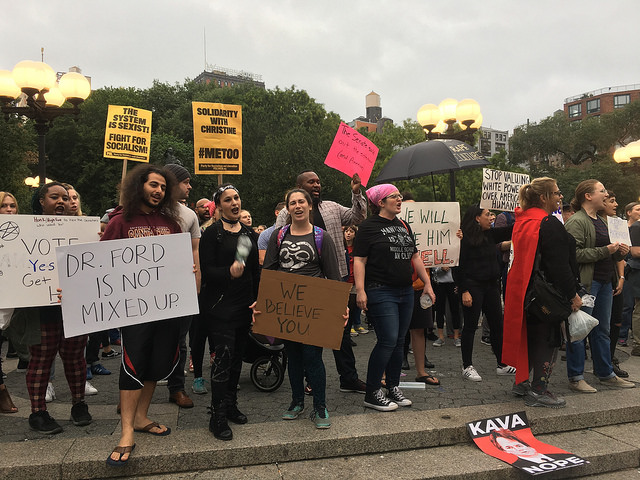 Angry protesters gathered in Union Square Park today to denounce the confirmation of  Brett Kavanaugh to the Supreme Court and to show their voice matters, even when it feels like it doesn’t.

About 50 protesters chanted “Shame,” “We do not consent,” and “No peace” on the steps beneath the statue of George Washington. They carried signs that read, “We believe you,” “Supreme Liar” and “The Senate sold out the sisterhood (and America).” They stood together in solidarity with Dr. Christine Blasey Ford and all survivors of sexual violence.

She was angry that nothing had changed in the years since Anita Hill had accused Clarence Thomas of sexual harassment.

I think it’s ridiculous that this is happening,” Horton said. “To think that the Anita Hill trial happened in 1991, just months before I was born and I’ve lived my entire life and still the same thing is happening again. Sexual assault, sexual harassment, it’s not being taken seriously.” 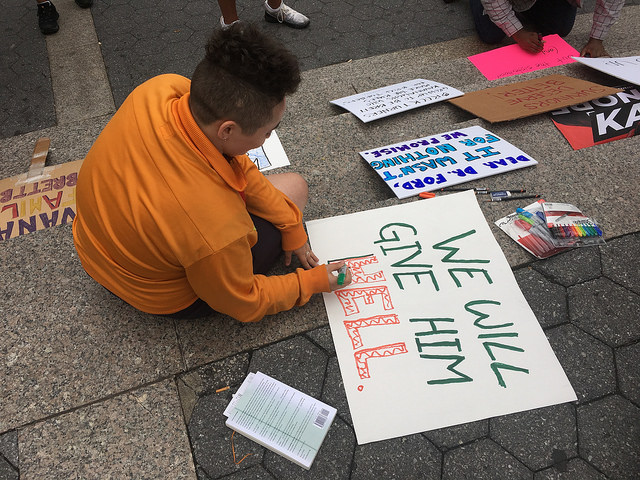 A protester works on a signs to hold in protest of Judge Brett Kavanaugh’s Supreme Court confirmation. Photo by Emma Bolton

“They’re choosing their power,” she said, “White male power, specifically, and privilege, over humanity and women.”

DiGangi showed up to demand their attention, even though the protest would no longer put pressure on lawmakers to vote against Judge Kavanaugh.

“I think women need to hear that they matter,” said DiGangi. “And not to lose hope and that we’re here to fight and we will overcome this and we’re resilient.” 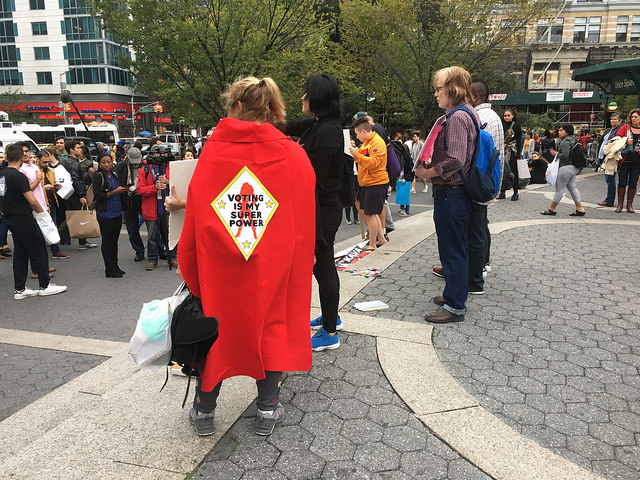 Catherine Kraft, 65, wore a superhero cape reading, “Voting is my Superpower.” Leading up to the vote in the Senate, she was sure Kavanaugh wouldn’t be confirmed. She channelled her disappointment into action.

“I am energized,” she said. “I live in New Jersey and I came into the city. I almost went to D.C. I just know deep in my heart that this is wrong.”

Anamaria Meneses works for the Party for Socialism and Liberation, one of the groups that organized the rally. She stressed the importance of highlighting the public’s anger at Kavanaugh’s nomination as an example of the dedication of the Me Too Movement. While she acknowledges voting is an action everyone can take, visibility of movements is crucial.

“Voting is important, but it’s also important that there are social movements that push it,” she said. “It wasn’t Democrats or Republicans that gave us Roe v. Wade or Brown vs. Board of Ed. It wasn’t them who gave us marriage equality or DACA — it was the people who came out, it was the people who united on the one front and said ‘This is enough, we really are tired of this.”