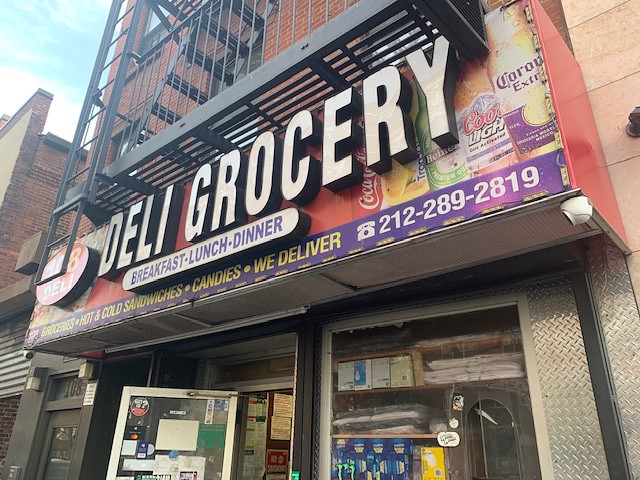 The 108 Deli Grocer is the only food store on 127th and Lexington Ave that takes Electronic Bank Transfer or EBT which is how low income residents access food stamps to pay for groceries. Photo by Dara Carr

In parts of East Harlem trying to get access to quality food has been a struggle, especially for public housing residents living on limited incomes.

“It’s very difficult to buy groceries,” said Tracy Gaddy, a public housing resident in East Harlem.    “A lot of the supermarkets are long distance, not close by.”

Gaddy lives in a stretch of East Harlem that is known as a food desert. This means there are no grocery stores within a half a mile. From 125th to 129th street on Lexington Ave, East Harlem residents like her are met with fast food chains like Popeyes, Dunkin Donuts, IHOP, various bodegas, and a couple of pizza places.  There are about 750,000 New York City residents living in food deserts

This community is also poor, with an average income of about $32,960. That’s 53% less  than the citywide average of $70,590. The majority of those living in poverty in East Harlem are people of color, making up 80% of the population.

Monique Johnson, 54, said that where she lives has left her with very limited access to healthy foods.

“We can’t go to the store and get proper food. We have to shop in stores that are no good to us,” she said. “We are being forced to buy things we don’t want.”

Not having an adequate grocery store makes some of the public housing residents feel hopeless and the dreary buildings adds to their misery.

“It’s like a locked-in community here, with nothing,” Johnson said. “You have the buildings, then the school and the park, nothing else.”

But, over the past 20 years, the white population in East Harlem has doubled, going from 7.3% to 14% which is creating customers for high end supermarkets.

Currently, the closest supermarkets are the City Fresh Market location on 116th and Third Ave and the Whole Foods on 125th near Malcolm X Boulevard.

Felicia Buchanan, 54, said that Whole Foods is out of the equation when she buys groceries.

Most of their local bodegas do not take EBT, which allows low income residents  electronic access to their food stamps to pay for their  grocieries, nor have the kind of nutritious food that you would get from a supermarket.

Out of the six bodegas that service that area, only one takes EBT. But one bodega, Gourmet Deli, has been trying to get EBT for over a year now.

“Everyday customers ask what time you are getting the EBT, when are you getting your EBT ?” “They all need it around here, said AesemAlbarti, 21, a cashier at Gourmet Deli.  “It’s not in my hands. There’s nothing I can do about it.”

“The prices are very high because there’s no supermarket in the vicinity,” Buchanan said. “So the bodega raises their prices because they know we don’t have anywhere else to go.”

Albarti said that’s not the case. He said the store has other expenses and is sometimes blindsided by the supplier.

“Even if they raise the price on us, from the supply we get it from, sometimes we raise a dollar or two on a case,” Albarti said. “We do this because we have many workers, pay rent and electricity. We only make 10 percent profit.”

According to Gaddy, living in an area with restrictive food access and a current pandemic is causing residents  to make rash financial decisions in order to eat.

“A can of tomato paste is costing $3,” Gaddy said.“Since the pandemic, everything has gone up tremendously, but it’s like if you really want it, you’re gonna pay for it.