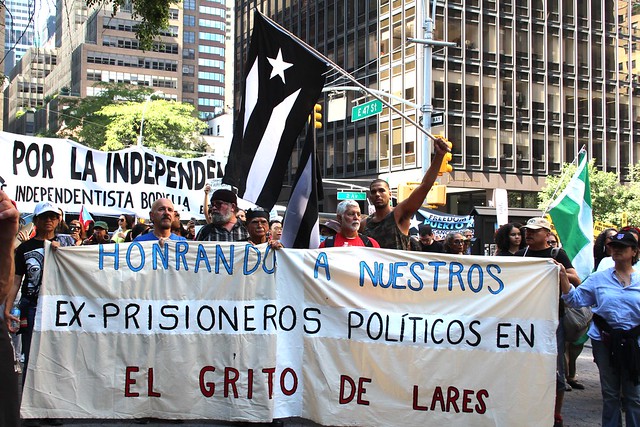 James Flores left Puerto Rico in 1975 to serve in the United States Army. He has not lived on the island since then.

Although the Connecticut resident travels regularly to Puerto Rico, he hopes to resettle in the island permanently once it gains its independence from the United States.

“My family and my daughters are here (on the mainland), and I think the motherland needs me here to fight for independence,” he said. “Once Puerto Rico is free, then I’ll go back.”

Flores, 62, was one of the boricuas that this afternoon marched from Columbus Circle to the United Nations headquarters to demand the island’s total sovereignty from the United States. The rally was organized by Frente Independentista Boricua, a group composed of several organizations that favor Puerto Rico’s independence.

“I’m here because I have a commitment with my motherland. I love the American people, but I hate the American empire,” Flores, who drove three hours to participate in the march, said. “That’s what it’s all about. Stop the imperialism, stop colonialism and fight for our freedom. Every country deserves their freedom.” 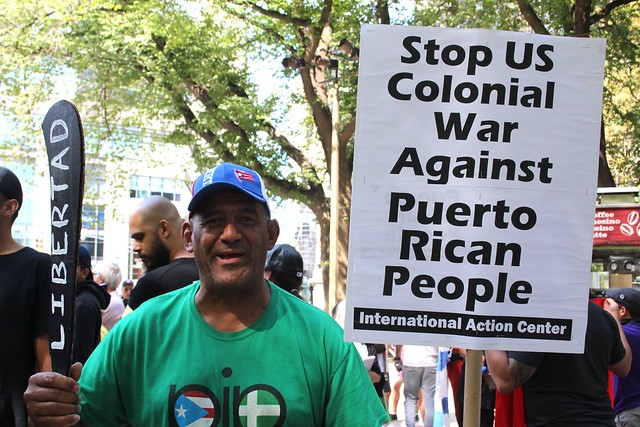 James Flores, 62, traveled three hours from Connecticut to New York City to participate in a rally for Puerto Rico’s independence from the United States. By Amanda Pérez Pintado

For the activists  in the march, the route to the island’s decolonization is through independence as opposed to statehood. They also demanded the cancellation of Puerto Rico’s over $70 billion national debt.

“We need to cut the ties of colonialism so that the people in Puerto Rico can make decisions about their land and make decisions to change the dynamic,” Lorraine Liriano, member of Call to Action on Puerto Rico, said. “We feel that the debt is illegal and odious. This debt was created because of the colonial situation.”

Marching to the beat of pandereta drums, participants waved Puerto Rican flags and chanted “U.S.A. get out of Puerto Rico,” “from the mountains to the sea, Puerto Rico will be free,” and “the people united will never be defeated.” Protestors held up signs that read “reparations for Puerto Rico” and “la Junta (the Financial Oversight and Management Board for Puerto Rico) proves our colonial status.” 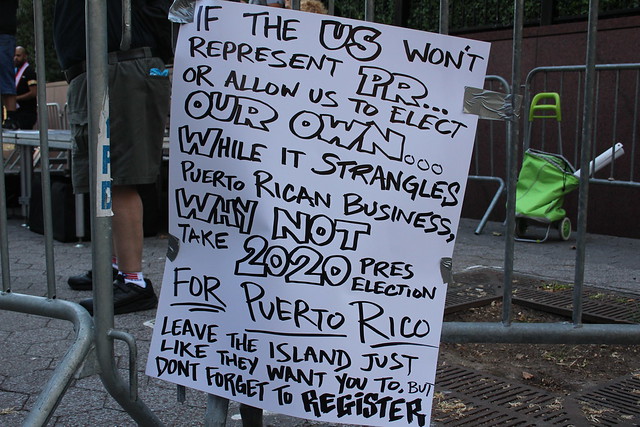 Puerto Ricans rallied in front of the United Nations headquarters to demand Puerto Rico’s independence from the United States. Signs like this one decorated the stage area where activists addressed the crowd. By Amanda Pérez Pintado

For Puerto Rican nationalist and former political prisoner Oscar López Rivera, the rally posed an opportunity to demonstrate the support for Puerto Rico’s independence within the mainland.

López Rivera stressed that one of the best ways for Puerto Ricans who live on the mainland to support boricuas on the island is by investing money in Puerto Rico whenever possible.

Ana Juarbe, 71, said that coming out to events such as the rally, writing petitions and performing certain legal work are some effective mechanisms to create awareness about the issues that affect Puerto Rico.

“Look at the way this president treated us during the hurricane,” the Manhattan Valley resident said. “It’s just an insult. It’s a second class citizenship. It’s a very exploitative relationship. It’s colonialism full blown. We really need to speak up and make people more aware of what’s at stake.”