Lavish signs in all hues of orange, blue, and green adorn Main Street in Flushing, Queens, showcasing homeland favorites like flaky, pan-fried scallion pancakes and luscious pearl milk tea to Chinese movies and books galore. Most of these signs catch the eye not for their colors or designs, but because majority of them are in Chinese.

“It really makes me feel like I’m actually there – in China,” said Rouen, France native Agnes Rousseau, 37, who was visiting New York with her husband and two young daughters. “But it’s extremely overwhelming and a bit intimidating how nearly every sign is structured in the same way with barely any English translations.”

Last August, Councilman Peter Koo urged inspectors with the New York City Department of Consumer Affairs to enforce a state law passed in 1993 that would require Flushing businesses to have at least 60 percent of their signs in English or face a fine if they did not comply. The law was originally enacted during the Depression to safeguard shoppers from scams in underground stores.

“Ultimately, these bills will help local businesses expand their customer base, increase revenues and be more consumer friendly,” said Koo in a press release. “Additionally, our police, firemen and emergency responders will be able to easily locate an establishment and ascertain what type of business they will encounter when they arrive.”

Koo’s chief of staff, James McLelland, said the bill is still being discussed in general counsel.

The proposition has divided much of the Asian population. Some dissenters believe English signs would not only “alienate” Chinese customers, especially those who do not speak English and rely on the signs for guidance, but also force immigrants to assimilate to American customs. On the other hand, supporters of the law feel that implementing English is something necessary that would not only generate more revenue by attracting consumers of more diverse backgrounds, but also seems proper to incorporate the dialect that U.S. citizens are required to know.

Flushing resident Yu Zhou, 52, does not want the signs to change. They help her feel connected to her native language and culture.

“My language and culture is all I have here to remind me of what I left behind,” she said . “I feel like I would be giving up a part of me if all the signs were to change.”

Zhou, who came to New York with her daughter and son from Shanghai nearly 20 years ago, said she felt the law “may have good intentions,” but being immersed into “so much English” in a city supposedly renowned for its diversity is upsetting.

According to the Bureau of Labor Statistics, Asian Americans constitute about 12 percent of New York City’s population, with those of Chinese origin making up nearly half that number.

Maylei Zhou, 24, Yu’s daughter, has been frequenting Main Street’s Tai Pan Bakery for her daily morning roast pork bun and hot milk tea before her commute to Hunter College, where she is studying nursing. She said the bakery, which caters to a mostly Chinese community, makes her relive the few memories she has left of her childhood back in Shanghai. 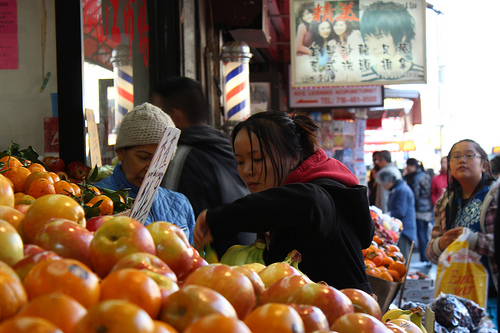 Maylei Zhou (center), a Shanghai native who has been living in Flushing for the past 20 years, shops for fruits outside the Ou Jiang Supermarket on the corner of Main Street and 40th Road in Flushing, Queens on Saturday. Photo by Alexa Mae Asperin

“It’s like my little piece of China,” she said. “It gives me a sense of connection to the things we left back home. But for others, the menu, the language, it may seem a bit overwhelming.”

Zhou referenced the predominantly Chinese-language menu at Tai Pan Bakery, where she pointed out the minute English descriptions under the large Chinese lettering of menu items, adding that for those unfamiliar with the Chinese language, deciphering the menu could very much be a daunting endeavor.

A few blocks down south at the Maxin Bakery, which also has a menu much akin to the one in Tai Pan, Mai Ling Chen, 45, said most of the regular customers were of Chinese descent and that tourists rarely frequented the eatery. She said the law, if enforced, would not welcome new customers, but rather discourage some of their current patrons.

“When most people think of Chinatown, they go to Manhattan, not Flushing,” said Chen, of Bayside, Queens. “Most of the people that come in here are Chinese and other Asian customers buying groceries or baked goods on a daily basis, not as a one-time visit.”

The New York City Department of City Planning’s 2000 Census states there are over 122,000 foreign-born residents in Queens Community District 7, which includes cities such as Flushing, College Point, and Bay Terrace. Of that figure, about 32,000 people are from China. Additionally, nearly 35 percent of that population does not speak English; Chinese is the main language spoken in 27,031 homes.

Gary Luo, 55, owner of a small electronics store nearby, agreed with Chen, noting that most of his customers are fellow Chinese consumers, many from his hometown of Beijing. Luo said most of the people that visit his store come in because “they feel comfortable asking questions about technical things with someone they know will not judge or criticize them if their language is a little off.”

Luo, who came to Flushing 22 years ago with his daughter and son, said he struggled learning English but knew it was necessary for him to start his business. He added that he felt it was important for him to know English so he could teach his children.

“It was scary at first when we first came to America, learning something new, but it’s part of being an American,” Luo said. “I feel as a Chinese-American that you need to embrace the English language but remember your roots also. You don’t need to give it all up.”

However, he added that the law does not take into consideration differences between the Chinese and English languages.

“That up there in Chinese means Red House,” Luo said as he pointed to a fluorescent orange sign surrounded by other multicolored placards. “But that’s actually a real estate office.”

Lin Chun, 31, of Flushing, left Changsha, China for New York five years ago to pursue a law degree. She has come to Maxin Bakery every morning for her usual coffee and egg tart, which she said instantly “teleports me to the corner bakery in Changsha.” She felt it was a “shame” that the battle for English signs in Flushing was garnering opposition because “equality is something that should be present everywhere.”

“I am proud of my heritage, my culture, my language,” Chun said. “You see all of that here, but I’m not only Chinese. I’m Chinese-American. And that means the English language is a part of me now, too. It’s only fitting that everyone should get the best of both worlds.”

The du facto language of the US is English, my grandparents had to learn it (they are from Ireland and Italy)even though Irish and Italian were spoken in their respective homes.

I have found on more than a few occasions that westerners are not welcome in many stores-or they are charged a different(read: higher) price than non-Asians/Chinese. This doesn’t do much to foster good relations with the rest of Flushingites. That said, I applaud those Chinese and Chinese -American leaders that call for the signs to be in English and Chinese. They take a lot of flack from fellow Chinese-many of whom see them as “sell outs” to the Americans.

WWhat is comes down to is this: Show respect to you native lands customs, but remember that you have to live by American rules when it comes to business.

Its Simple!!! Whatever country you are in you should display the larger words of your busniess sign in the native tongue period!!!!

I’m surprised that people are not doing this and disqusted by it, and since these people do not have any commen sense nor respect for the location where theirbusiness is then they should be penalized and/or shut down.