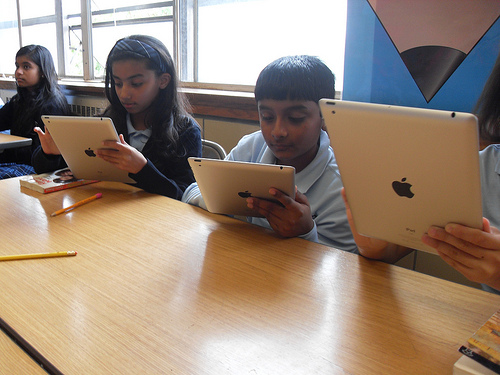 (From left) Sixth-graders Farzana Ramjohn, Alexander Persaud, and Katherine Duarte of Our Lady's Catholic Academy get "touchy" with their new iPad2's. (Photo by Alexa Mae Asperin)

Students at Our Lady’s Catholic Academy in South Ozone Park, Queens are closing their “old-fashioned” textbooks and notebooks as they enter the touch-screen world of Apple for assignments, note taking and tutorials.

“I’m so emotional,” said Katherine Duarte, 11, of South Ozone Park. “I think I’m going to be able to learn a lot more things than with a regular book because it’s interactive.”

Thirty-one students of Ricky Sosa’s sixth-grade class traded in their Mead paper notebooks for iPads yesterday, thanks to a $10,000 grant from the Alive in Hope Foundation and Futures in Education. Additional funding was acquired through school fundraisers, increased enrollment and cost savings from the discontinued use of paper textbooks.

Principal Kevin Coyne, 32, of Rockaway Park, said this year’s sixth grade class had the greatest gain in standardized test scores, especially in the reading area. As a result, he decided to write a grant to the Alive in Hope Foundation to help students move forward with a new approach.

“Education is limited by traditional technology,” Coyne said. “With an iPad, children can access vocabulary by tapping on a word and instantly seeing the definition or explore geography with 3-D maps.”

Coyne added that with the use of an iPad, the child becomes more active in effective learning. He said that while many think Catholic schools are “stuck in the 20th century,” OLCA is breaking boundaries by becoming the first school in the Diocese of Brooklyn and Queens to introduce iPads to students.

“I wanted to do this not because it’s the ‘cool thing’ but because this is going to be a tool that will maximize a student’s learning experience,” he said. “We’re bringing kids to the present.”

Priscilla Uy of Futures in Education, an organization providing tuition assistance and program support to students of Catholic schools in Brooklyn and Queens, said the introduction of the iPad in to the classroom is priceless.

“It’s going to help kids keep up with the world and be up-to-date with technology,” said Uy, 30, of Oakwood, Staten Island. “It’s a great gift of education. We’re giving a lot of kids in this neighborhood an opportunity they might not otherwise have.”

Children in Sosa’s class will ditch their heavy textbooks and opt for iBooks, which will enable them to highlight, take notes and even look up words in a built-in dictionary. The iPad even has the ability to read back to them.

“These students have the tools right in front of them,” said Sosa, 26, of Kew Garden Hills. “You’re presenting the information and letting them explore it themselves.”

However, there will be restrictions as to what his students can access. Educational-based applications in geography, science, math and anatomy are all acceptable but students do not have access to the Apple App Store and the iPads can only be used in the classroom.

Sosa said the class isn’t completely exiling books, pens and notebooks from the classroom, but that the iPad is simply an additional tool that will be integrated in the curriculum to help students on a more personal level.

“If a student has a question about a word or something they don’t understand, they have the ability to go on Google and look it up themselves,” Sosa said. “We do the research together and learn together.”

Ananda Persaud, 40, mother of 11-year-old Kayla, who received an iPad today, has mixed feelings toward the new technology being introduced to her daughter.

“I’m a little wary because I wonder, what about manuals and textbooks,” said the mother of three from Ozone Park. “But my kids know a lot about technology, they even teach me, so I’m supportive.

Sebastian Araya, 11, of South Ozone Park, admitted he would probably take fewer notes with a pen and paper but that the iPad would still do more good than harm for him.

“I need more help in math, so I can use the iPad to play math games,” Araya said. “It’s different because I’m learning in a fun way.”

Shortly before lunchtime, other students peeked into Sosa’s classroom to witness their friends turning a new page in their school’s history with the simple touch of a finger.

I have to say that it was very fun having ipads and in our ladys catholic academy are doing fine with it ir ley me just say six grade im noelle rodriguez.