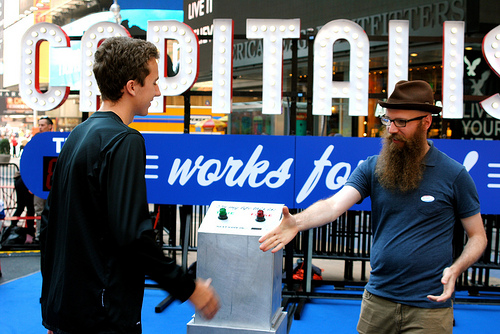 Artist Steve Lambert shakes the hand of a curious pedestrian at his “Capitalism works for me!” exhibit in Times Square yesterday. Photo by Zoe Lake.

Artist Steve Lambert knows how to draw a crowd.

Curious pedestrians gathered in Times Square yesterday afternoon in front of an enormous blinking blue and white sign reading “Capitalism works for me!”

This is Lambert’s art. Two digital scoreboards labeled ‘true’ and ‘false’ glowed red underneath the bright lights of ‘capitalism,’ beckoning onlookers to cast a vote at an erected podium before the sign. Lambert, the creator of the sign, stood at its side encouraging bystanders to participate in his work, by voting and discussing the issue.

“You’ve thought this through?” he asked one participant cocking his head and raising his reddish brown eyebrows under a felt fedora, “you ready to go?”

Lambert is engaging as he worked the crowd with lots of laughs and strong handshakes. His distinctive long red beard and thick framed glasses setting him apart from the throngs of touristy looking spectators that gather around him and his artwork.

Raised by parents who both left religious callings, (his mother was a former nun, his father, an ex-monk), Lambert struggled in life to create meaningful artwork.

“There was a point I thought, ‘what was the most important thing I can do?’ I wanted to do something about capitalism that wasn’t tedious, and was fun,” he said.

The purpose, the artist explained, is to create a space for people to think about a political issue and come up with better solutions.

Lambert is no stranger to making a political statement. In 2008, in collaboration with dozens of other artists and writers, Lambert successfully distributed in New York City, and in other cities around the nation, over 80,000 copies of a fake future edition of the New York Times that declared the Iraq War over, and placed former President George W. Bush, and Vice President Dick Cheney on trial for war crimes. The tagline of the phony paper read, “All the News We Hope to Print.”

In another artist collaboration, Lambert founded the Anti Advertising Agency, an ongoing project that he and other participating artists hope will redirect the way the American public view commercial advertising and its saturation into the American life. Lambert’s piece on capitalism, displayed yesterday, and on display again from October 6 through the 9th, in the ad soaked bowtie of Times Square, is an extension of his desire to reshape the American understanding of advertisement.

“I have great admiration for advertisement and signs,” Lambert said. “I don’t like the way they are used but what they do is incredible. I use the tools of advertising to pull people in a different direction. I am not trying to make art for an exclusive audience.”

Nearby Lambert stood a beaming Sherry Dobbin. The director of public art in Times Square, Dobbin is responsible for bringing together Lambert and the French Institute Alliance Francaise (FIAF), whose 2013 Crossing the Line Festival of the Arts is cosponsoring the Times Square installment.

“As soon as I heard about Steven from other curators, I said this has to happen in Times Square,” she said. “It’s the right site and the right timing. One of the things we like to do is pick challenging pieces that are site specific, that engage people get them thinking. I am very excited to see this happen. It is such an iconic space for free speech, freedom of the press, [and] the free market, Times Square is an ideal location.”

On average over 350,000 pedestrians pass through Times Square every day making it an ideal venue for interactive installation art. Graphic designer Daniel Dunnan, 34, of Williamsburg, Brooklyn, came to Times Square today to see the piece and chose also to participate by voting against capitalism.

“I was a little torn,” he said “I think capitalism does work for me. I indisputably live a very charmed existence, but I know people who it doesn’t work for, and I would like it to work for everyone.”

Lambert said Times Square could not provide a better platform to reach a large audience and foster discussion. Capitalism, the artist thinks, is not socially acceptable to talk about.

“We literally need a large flashing sign to create a space for it,” he said. “All great things are complicated.”

He sounds like a quack but your article is well written Zoe JIll How is school going.