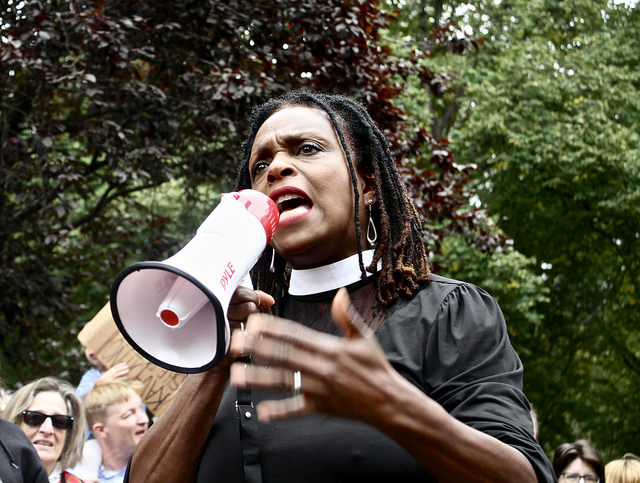 A speaker encourages women to get out and vote at the  Stop Kavanaugh Rally at Washington Square Park yesterday. Photo by Opheli Garcia Lawler

The rally was organized by Erin Lynn, who wanted to find a way to protest when the logistics of getting on a bus to D.C. weren’t coming together. So she made a Facebook event page, and invited two friends. By the end of the day, thousands marked that they would be attending. The National Women’s March reached out to Lynn to coordinate.

The southwest corner of Washington Square Park soon became crowded with hundreds of protesters. They took turns speaking and offering different solutions to the issues plaguing the United States, sometimes directly disagreeing with the person who spoke before. Some women were so determined to be a part of the protest, they arrived hours early, just so they didn’t miss anything.

“About 35 of us just marched around the park,” said one early protestor, Lindsay Borden, who is the Interim Pastor at New York City’s Second Presbyterian Church. “We weren’t sure if anyone else was going to show.” 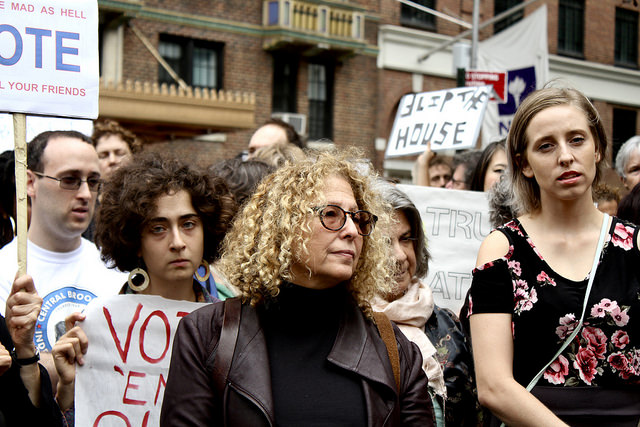 The time coincided with protests in Washington D.C., where hundreds of women flooded the Senate galleries, and at least 164 were arrested by U.S. Capitol Police, according to law enforcement. Women in D.C. and New York were united by fury and they rallied against a man accused of sexual assault and misconduct, who would be sworn in just hours later.

“We knew we were going to be under attack,” said Julianne Hoffenberg, director of The Gathering for Justice, run by Women’s March organizer Carmen Perez. “It was just a matter of how they were going to do it. Personally, I have been blown away by how fast fascism has sort of toppled the revolution that was coming before.”

Hoffenberg said that a year ago, she never would have guessed that she’d be on the ground organizing against a Supreme Court nominee like Kavanaugh. She was at the event on behalf of Linda Sarsour, another Women’s March organizer, to assist Erin Lynn with the logistics of putting together a rally at the last minute, and to make sure the protest stayed safe and nonviolent.

Lynn said she didn’t want to just sit at home. She couldn’t. She brought a box of coffee and several boxes of donuts. She wasn’t sure what to expect. But she went on to lead the crowds in speaking out, beginning by sharing her own story as a survivor.

“I have been sexually assault three times,” she told the crowd later in the afternoon. “And it took me a long time just to admit that.” 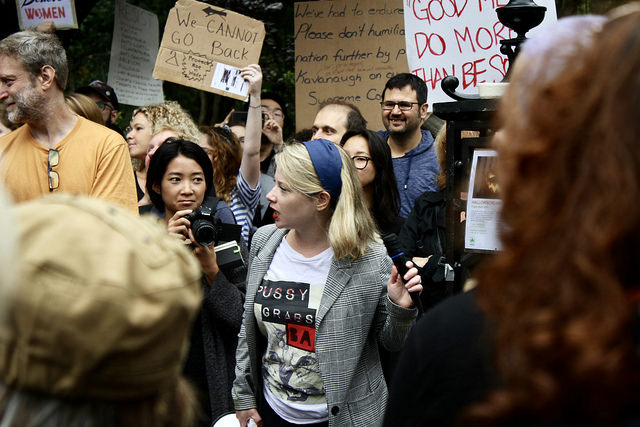 She then invited other people to take the megaphone and share their stories. Some took the opportunity to share their own stories of surviving sexual assault. Others just screamed. Some broke down in despair as they begged the crowd to get registered to vote. Some called for the downfall of capitalism, of the republic, of President Donald Trump.

“I thought I couldn’t feel more heartbroken than the day I learned how they were ripping babies from their mothers’ arms at the border,” said Vicky Barrios Newsom, a member of Movimiento Cosecha. She spoke through deep, shaky breaths. Her face was red and wet with tears. She had been crying since she arrived. “I feel betrayed. I feel betrayed by white women. Please. Please. Please. Talk to your family.”

Many protesters echoed similar feelings of betrayal from white women – even white women themselves. This was especially true when it came to Republican Senator Susan Collins’ decision to vote for Kavanaugh’s confirmation. Many held out hope that she would vote against party lines and block Trump’s nominee from the lifetime appointment. Walking through the cramped crowd, it was impossible to go a few feet without hearing someone mutter her name in disgust.

For others, the betrayal was less shocking. Zakiyah Anarsi, an education advocate in the city of New York at the Alliance for Quality Education has long steeled herself against the disappointment politicians can cause. While the nomination of Kavanaugh was particularly painful for Ansari, who is the mother of a sexual assault survivor, she is hoping others who are outraged will see the intersectionality of the issue.

“The work that I do, I’ve been active for almost 20 years,” she said. “But all this stuff merges into one. Like you can’t talk about one without the other. What this has done is it has left us with an opportunity of folks who aren’t normally engaged with stuff to now be engaged, specifically white women.” 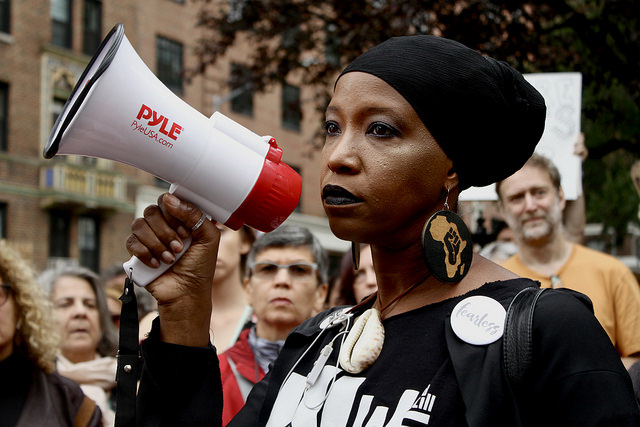 Despite the differences between protesters, whether they were new organizers like Lynn, or career activists like Ansari, Barrios Newsom and Hoffenberg, or faith leaders like Borden, each gladly deferred the mic to the other, listened intently to each other’s stories, and offered support when a personal testimony became overwhelming. Midway through the rally, all their voices joined in chorus: “I believe you,” they shouted.