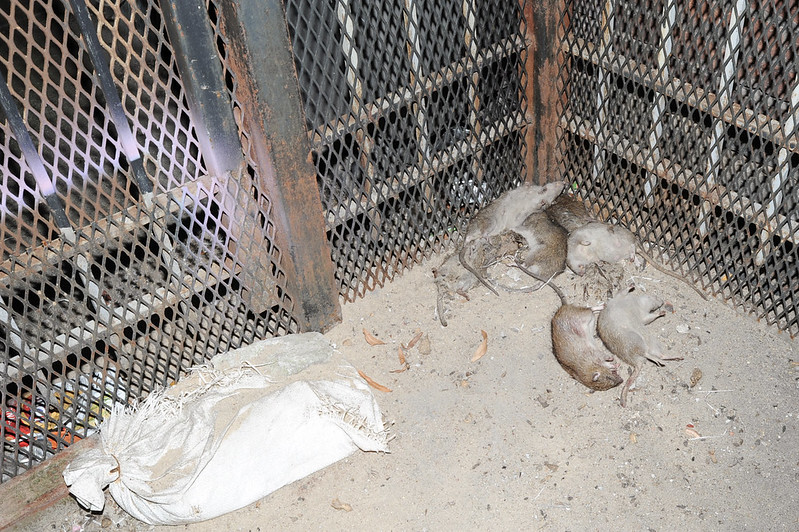 Rats that super of an apartment building in West Harlem, Henri Sagastome, killed while cleaning a garbage aisle. December 3, 2021. Photo by Nikol Mudrová

Rats are thriving in New York City. They are running on the streets, in parks and  in the subway. They are  jumping in and out of garbage cans and they’ve even been spotted in common laundry rooms.

“If I do laundry at night, I jingle my keys to let them (rats) know I’m coming and watch a whole horde scurry away with their worm-like tails in between their legs,” Zara Khan, of West Harlem said. Her building’s laundry room is next to where the tenants store their garbage.

“I’m seeing way more rats this year and I’m not sure why; dead on the sidewalks and scurrying in the shadows,” she said.

Henri Sagastome, the super at Khan’s West Harlem apartment building, is aware of this issue.

“I can’t stand them,” he said while standing in the alley where the trash is kept. This area is where the rats feast and thrive. 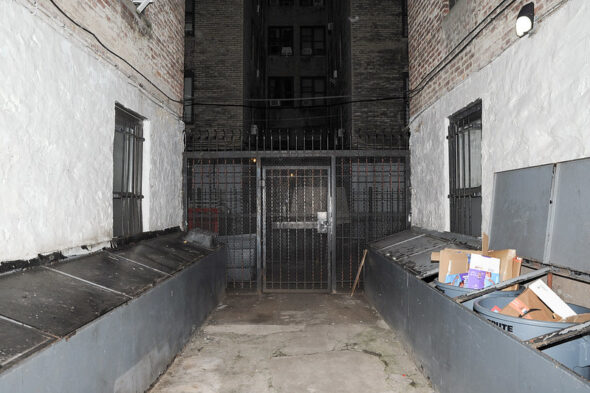 Trash alley in the apartment building in West Harlem after the super Henri Sagastome cleaned it, December 3, 2021. Photo by Nikol Mudrová

Sagastome said that he just finished cleaning the alley to get rid of the rats and that now, he is telling every tenant to close a door at the end of the alley that leads to a space neighboring other buildings to prevent rats coming back.

“The rats come because of the garbage, but they’re not from here,” he said as he pointed to the opposite building behind a fence “They stay in basements there.” And according to the Health Department’s Rat Information Portal, that  property did have rats during the last inspection on November 18.

In just one day, Sagastome managed to kill around six rats that were already on the property of his building.

“Hopefully, we can maintain it clean here from now on so other ones won’t come,” he said.

Statistics show New Yorkers have seen more rats than in previous years. In 2020, the number of rat sightseeings actually decreased as people spent most of their time inside and restaurants were shut down during lockdown. Rodents wound up killing each other over food.

New York also ranked as the third rattiest city in America for a second year in a row after Chicago and Los Angeles in the Orkin’s Top 50 Rattiest Cities list. Such a large number of rats can be dangerous for people, Matt Frye from the New York State Integrated Pest Management Program at Cornell University wrote in an email.

In 2021, 15 cases of leptospirosis, a bacterial disease that is spread via rat urine and can cause serious liver and kidney damage, were reported. One of those infections was fatal.

“While Leptospira cases have been in the news this year, researchers from Columbia University identified several known and novel pathogens carried by a small number of rats from a few sites in NYC,” Frye wrote. “These rats were also carrying ectoparasites (fleas, lice, mites) that can transmit pathogens to people. Moreover, living with rodents can cause allergies. They can also damage buildings and structures.”

But keeping rats away is hard in cities like New York, Frye wrote. People play a crucial role in  rat infestation by providing food  in the form of  garbage, he said. The city’s Health Department advises getting fitted lids for garbage containers or checking for cracks and holes in buildings.

In 2017, Mayor Bill de Blasio announced a $32 million plan to get rid of rats which included, among other things, implementation of solar powered trash cans.

“It’s a wonderful treasure worth $3,500,” Richard Reynolds, who leads a group of rat hunters, said about the trash cans, whose cost is actually $7,000 a can. “You have to step on it, the thing opens, you put your garbage in, and it closes… But you gotta empty them. If you don’t, the thing jams open, and rats get in anyway.”

“Female rats come in season every three days,” he  said. “Then, the gestation period is 23 days, the litter is ten to 12 days, and they reach maturity at about five weeks. So, if you start with two rats today, you’ll have 24,000 of them a year from now.”

Reynold said, incoming mayor’s  Eric Adam’s project in Brooklyn using a trap in a form of “drowning tank” known as the Ekomille has been a success.

“We hope he is going to take it city wide,” Reynolds said.

But Reynolds provides an alternative – with help of around 65 to 70 people and six specifically trained dogs, he hunts rats.  He said that if people pick up the garbage, it stops the rats from thriving.  But now the rats move from one garbage pile to another

“Rats must come out to feed, and they do it every night on the same path, the same pile of garbage,” he said. “You don’t have to be real smart to put a dog in the middle of that highway to catch the rat. But if you pick up the garbage, things change.”

Experts, exterminators, and city officials  also blamed climate change – and more specifically, the wetter summer – and not enough inspectors controlling rats in places like restaurants as they were assigned to control proof of vaccinations and masking instead.

The city’s data shows another abnormality, more rat sightseeings in fall months than during spring when rats usually go out after being inside all winter.

“This year, we’re still getting young rats. So, it’s gonna be even more of them around in the