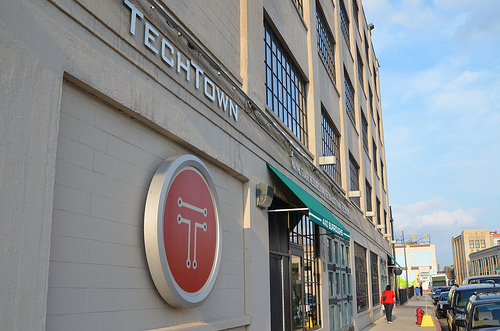 At TechTown, Wayne State University's 100,000 square foot research park and business incubator, Detroit is transforming from a single-industry economy to a dynamic haven for creativity. Photo by Nick DeSantis.

At the corner of Cass Avenue and Burroughs Street in midtown Detroit, two opposing symbols of explosive growth compete to catch a visitor’s eye.

On one side looms the American Beauty Electric Iron building, an industrial relic neglected for so long that leafy trees have burst through the roof. Across the street, an engine of more practical growth – economic, rather than botanical – stands shoulder to shoulder with its blighted neighbor.

The new building houses some of the booming entrepreneurial spirit that is transforming Detroit from a one-industry city into a haven of creative energy.

Inside Wayne State University’s TechTown – a 100,000 square foot technology park and business incubator – entrepreneurs from across southeast Michigan are finding ways to bring new jobs to a city that lost a quarter of its population in the last decade. As the economy soured, Detroit’s frozen investment climate made it difficult to attract businesses. But thanks to TechTown and other local innovators, a diverse range of companies is beginning to repair the tattered social fabric that drove jobs away.

Randal Charlton, TechTown’s executive director, knows firsthand the risk involved in trying to jump-start economic growth in a declining city. His company, Asterand, was TechTown’s first tenant in 2005. Today, Asterand is the world’s largest supplier of human tissue samples and is a publicly traded company on the London Stock Exchange.

Charlton said he picked Detroit because he could see the city was starved for investment.

“I knew that if I took the company to Boston, the only people who would care about me would be my landlord and the local Starbucks,” he said. “Because there are too many good companies walking up and down the street, so who cares? Even go to Ann Arbor – you set up a new company there – so what? It’s like a little Disney World all on its own. But you come here, and you start creating jobs, and people rush to help you.”

Since opening in 2004, TechTown has grown to house 250 companies and has helped thousands of other entrepreneurs realize their visions for a new Detroit. Sixty percent of TechTown’s business portfolio is women-owned, and 47% of the companies are run by people over the age of 45. Despite its name, TechTown doesn’t just provide assistance to biomedical companies and other high-tech businesses. Eighty-five percent of TechTown companies are what management calls “lifestyle companies,” which provide basic services for residents right in their neighborhood. They include printers, art magazine publishers and cafes.

“We don’t have the luxury that Silicon Valley has of just focusing on figuring out where the next Google is,” said Charlton. “It doesn’t matter whether it’s dry cleaning, or a corner deli store, snow removal service, or a taxi service for senior folks, we’ve got to support a broad range of entrepreneurial activity.”

TechTown’s programming attracts a wide variety of locals. The Shifting Gears initiative provides business training and mentorship opportunities for older Detroiters – many who are looking for second acts in their careers after being laid off from jobs in the auto industry.

“On one level, Detroit suffered by having a generation of great entrepreneurs in the 1910s, ‘20s and ‘30s who created so many jobs that the rest of us just needed to figure out who we were going to work for,” Charlton said.

Detroit’s main pillar of economic stability, which provided generations with stable jobs and good benefits, eventually became a liability when it disappeared and workers were unprepared to adapt their skills for different businesses. Shifting Gears trains late-career employees for new jobs with small businesses instead of large companies.

Jacob Raymond came to TechTown this year after founding Rep Your City, a local news website that recognizes and rates readers based on their participation in community events. Raymond, 27, grew up in Detroit and is trying to use his site to keep young people from fleeing the city at their first chance.

“I talk to kids in school, for example, middle school – I went to go talk to them for career day – and you have kids talking about, ‘the first thing I want to do is get out of here. There aren’t opportunities here.’”

TechTown is changing that dearth of opportunities, but businesses still face challenges that are unique to Detroit’s fragile recovery. Matt Clayson, director of the Detroit Creative Corridor Center, or DC3 – a business development group separate from TechTown that caters to Detroit’s creative professionals – said sustainable growth will come slowly in a city still plagued by quality-of-life problems that can chase away well-intentioned entrepreneurs.

“Detroit’s an easy place to come to with an idea,” he said. “It’s a hard place to execute that idea.”

An entrepreneur might come to Detroit with a plan to open a yoga studio and soon find their ambitions bumping up against the day-to-day challenges of operating in the city.

“When you open up your business, let’s say your storefront studio, and someone moves into a vacant house a block away and starts dealing drugs, you’re going to have to put the business on the back burner to deal with that drug dealing or else one of your clients is going to be mugged by a user,” said Clayson. “In Grand Rapids, where I grew up, you’re going to get a five-minute police response time for that. Here, it’s not going to happen.”

Tunde Wey is the founder of Detroit Big F Deal, one of the companies participating in the DC3 Creative Ventures program. This year, he launched his crowd-funding website that features Detroit-based projects and rewards donors with gift certificates and other incentives from local businesses. By keeping his projects local and using fellow businesses to reward contributors, Wey is able to keep money flowing inside the community.

He said that unlike some other cities where he’s tried to start businesses, Detroit’s community of entrepreneurs always opens its doors to people with good ideas and gives them the encouragement they need to get their ideas off the ground.

“Detroit is the most accessible place you’ll ever go to,” said Wey. “People are willing to share their time with you.”

As enthusiastic as those entrepreneurs may be to rebuild Detroit, TechTown is not without its problems. Funding remains a challenge.

In 2007, TechTown management found itself in trouble when 35% of the building was completed and tenants had filled the incomplete space to capacity. The cost of running the space exceeded the building’s rental income – primarily because TechTown, as a nonprofit, was not charging its start-up businesses market-rate rents. Charlton said they don’t raise their rents because start-ups don’t always have the resources to pay high rents.

Without more space to take in new tenants, TechTown could not gather the funds necessary to complete construction. Charlton compared the situation to a motel trying to make money with only one third of the rooms containing beds.

Several large foundation grants eventually solidified TechTown’s footing, and now the main building is almost finished. And management has plans to expand the campus’ footprint – including the dilapidated American Beauty Electric Iron building across the street, which Wayne State owns.

Both Charlton and Clayson agree that for the city’s recovery to continue, local entrepreneurs must develop a diverse range of businesses that will foster sustainable growth and create viable residential communities. The energy in Detroit’s business incubators has given the business community cautious optimism for the future.

“Collectively, people have said, ‘look, we’ve got to get behind Detroit,’” said Charlton. “If Detroit starts recovering, the rest of the state will recover.”