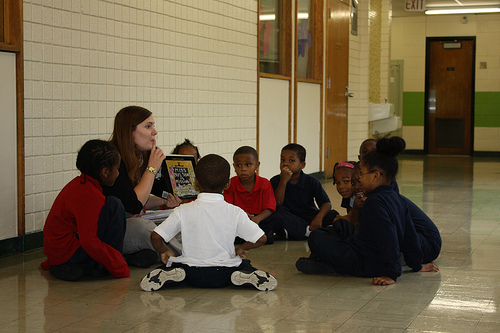 First grade students take a break from the classroom to read a story in the hallway during a bathroom break at Glazer Elementary School. Photo by Rachel Ohm

Glazer Elementary School is quiet on a Friday morning in mid-October. Upstairs, fourth graders are in the middle of the state MEAP test, and the hallways are silent. There is a new computer lab with boxes of unpacked Smartboards that are being put in classrooms. Downstairs, a classroom of first graders are eagerly raising their hands in a science class. There is another group of students sitting in a circle in the hallway while a teacher reads them a story during a bathroom break.

Glazer is one month into its new life as a charter school, one of five underperforming public schools to have been reopened as charters by the city’s Renaissance 2012 plan. The plan, developed by the school district’s emergency manager, originally called for the ambitious, and many say unrealistic, conversion of 45 failing public schools into charters, but has resulted in five new charters in the city that opened last month.

“The school is brighter. It’s a real transformation,” said Eddie Thomas, the principal at Glazer, standing in the doorway of the art room surrounded by popsicle-stick projects. “A lot of parents were excited. The kids are excited too.”

According to Michigan Department of Education public school rankings from the 2010-2011 school year, Glazer ranked in the bottom 10th percentile and New Loving in the bottom 14th percentile in student achievement on state tests and graduation rates.

Today, Glazer, which had been in a state of disrepair since a tornado hit the area in 1996, is something of a physical oasis in the neighborhood, complete with atrium gardens containing plants, flowers and picnic tables.

“There is a forest of bushes and trees across the street, a vacant house and next to that a drug house,” said Ralph Bland, the President and CEO of New Paradigm for Education.

“This school is a cornerstone of the neighborhood,” said Thomas, who has worked in Detroit schools for 19 years and was also the assistant principal at Michigan’s first charter school, University Prep Public School. The school is also just two blocks away from Focus: HOPE, one of Detroit’s largest providers of social services for the needy in Detroit and serves many of the families in the immediate community.

Yet not everyone is excited about the plan to open more charter schools in Detroit.

“Yes, it is an alternative to closing schools,” said Elena Herrada, a member of the Detroit Board of Education. “But it is not saving the district any money and we are still losing students to the suburbs.”

The conversion process from public to charter school has involved a lot of physical repairs to the schools and in both instances has brought in an entirely new staff to implement the New Paradigm curriculum with 90-minute math and reading blocks in the elementary schools. Six of the 14 teachers at Glazer are Teach for America Corps members.

“That’s what charter schools do,” said Herrada. “They get these young white kids from the suburbs to teach. They don’t realize that teaching in Detroit is tough. Things are hard here.”

Yet Thomas said that the dedication of his staff is one thing that makes his school stand out. When asked what he thinks makes the charter school model stand out his answer was the “passion of the teachers.”

“A majority are willing to go beyond their call of duty on a daily basis,” he said. Jason Brooks, who is the director of research at the Foundation for Education Reform and Accountability in Clifton Park, N.Y. said the charter school approach is one that other districts around the country could benefit from because charter schools can provide services that traditional public schools do not. For example, making sure kids get three meals a day and adequate rest is one of the biggest challenges to educating student populations in disadvantaged areas such as Detroit’s North End, where Detroit Edison and New Loving are located.

At Glazer, the school day ends slightly later at 3.30 but they also have after-school programs that provide dinner for students who stay. Detroit Edison, New Paradigm’s model school, is open on weekends and evenings during the school year to encourage students to have a safe place to spend their free time.

“It’s an approach that needs to be tried more frequently and something the Obama administration has been encouraging,” he said. “Disadvantaged and low-income kids need longer school days and more time in the classroom.”

According to Brooks, union laws at traditional public schools usually prohibit them from offering extended school days. He also said that because of freedom from some state regulations, charter schools are also able to adapt their curriculum to better serve student needs. Currently, New Orleans is the only city in the U.S. with more students enrolled in charter schools than traditional public schools.

“We don’t want to be New Orleans,” said Herrada. “They are losing all their money to charter schools.” She said that when charter schools open they divert district tax dollars from existing schools in exchange for minimal academic advantages.

The Detroit Edison model calls for longer 90-minute math and reading classes and students who come into the school reading below their grade level or those who have fallen behind can spend time with tutors during the longer class period.

“I think the classrooms are smaller,” said Latrice Turnage, 35, who has three children at Glazer. “There is extra one-on-one attention so my son doesn’t have to be in special ed.”

Turnage says that she “lost faith in DPS” after her son, Khanyhe, who is now in second grade, passed kindergarten in a regular public school without learning to write his name.
She was concerned that he had a learning disability but when she tried to get an I.E.P. the system was so slow it took almost an entire school year. In the charter school she says he gets extra help without having to be classified as a special ed student.

“Wait three months and see if she is still happy with the charter school,” said Herrada. “When something presents itself as a simple solution, there is usually more to it.”