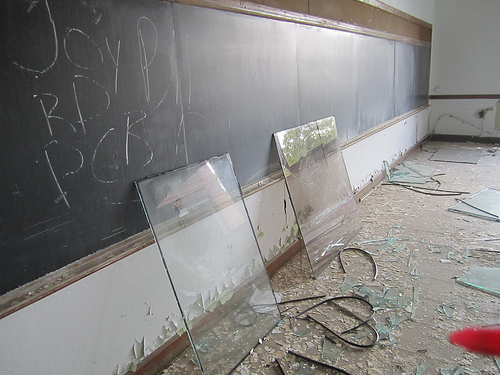 Pushing open a heavy side door, permanently propped open to allow easy access for intruders, urban explorer John gingerly stepped through tiny shards of glass that littered the now darkened hallways. The darkness, pierced with shafts of sunlight, broke through the gapping holes that once held windows. Bits of paper, wood splinters and broken lockers ripped from the walls completed the picture of what is now David Mackenzie High School.

John did not want to give his last name because this type or exploring, known as urban spelunking, is illegal and dangerous. But that does not stop John, a seasoned spelunker, and the many others who enjoy the thrill of stepping into the darkness and walking through Detroit’s once vibrant past.

Abandon buildings are a ubiquitous force that affects nearly every neighborhood in Detroit. Mayor David Bing has pledged to knock down 10,000 structures in his first term in an effort to downsize the enormous city down to a more manageable size.

But not every Detroiter sees these buildings as blights to be demolished.

Dan Austin, 30, works as a copy editor at the Detroit Free Press. Austin first became interested in urban exploration, particularly urban decay, when he started noticing an abandoned hotel on his daily commute to work. He started asking around to find out what the building once was and was amazed to find that no one knew anything about this impressive structure.

“Detroit tends to run from its history,” Austin said. “We seem to lack that historic pride that others have.”

The elusive building turned out to be the Statler hotel which Austin later discovered was the city’s first modern hotel. It was the first hotel in Detroit to have a bathroom in each bedroom and actual cold water that traveled through its pipes. The Statler was demolished in 2005 just in time for the Super Bowl XL, and 30 years after it had been abandoned.

“Blame it on the car culture,” Austin said. “Detroit has always been obsessed with the what’s shiny and new. But the whole does not improve unless you’re adding to it, not just reshuffling its parts.”

Austin’s book, “Lost Detroit,” published in 2010, chronicles the history of 12 of the city’s most historic buildings, showing in graphic detail the beauty that once was and the wasteland that now is.

While the history may be important to some, for others it’s preserving the memory of what the buildings have become that some find most important.

John is a professional photographer but has taken to giving tours of these skeletal infrastructures. Mackenzie, once a school that housed 2,000 students, closed in 2007 with fewer than 1,100 students. Mackenzie High is just one of the many high schools that faced what has been called the worst enrollment crisis in the nation. The Detroit Free Press reported in 2010 that Detroit had lost more than 100,000 students since 1999.

Sy Ginsberg a Mackenzie graduate of 1962, remembered the once grand auditorium.

“Some of these new high schools have more all-purpose multi-functioning auditoriums, but we had a great theater with stadium seating and a stage. It was really quite nice. They don’t make those anymore.”

For now the school auditorium of 2011 remains intact, except for some minor water damage that has collected by the stage. Still, John fears destruction in the not too distant future. 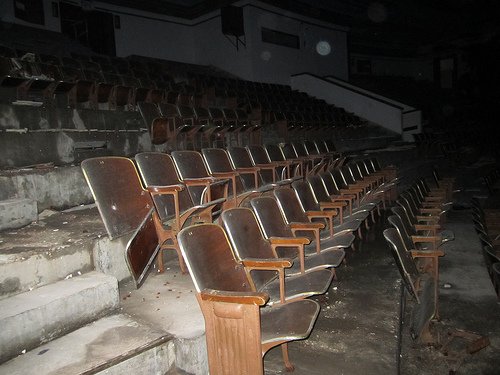 “Scrappers will come and smash these seats to remove the copper finish around the edges,” John said. “You can tell how long a building has been vacant for by the amount of valuable equipment that remains.”

Scrappers are yet another group that sees opportunity amongst the ruins. John describes three tiers of scrappers that exist within the scrapping system. The first tier is usually made up of professionally licensed workers such as plumbers or carpenters.

These scrappers often operate from 9 to 5 and work only with reputable scrap yards that insist on licensed workers. The second and third tier scrappers come in later peeling, pulling, and dragging anything they can get their hands on.

Despite his formidable size and massive beard, which John insisted protects him from scrappers and pretty girls, John prefers to avoid confrontation with police and scrappers alike.

As he crossed into what was once a science lab, now devoid of any actual equipment, John heard a noise outside and paused, mid-step to determine the origin of the sound. Three young girls with bright colored backpacks ran across the schoolyard, caught in the middle of a game of tag. John stayed quiet so as not to alarm the children.

“For them, [these buildings] just become part of their landscape,” John said.

In the past year alone 173 schools have closed, putting close to 40,000 children back into the school system, without a school.

“People think it’s easier to get rid of these buildings, some of which have been vacant for many years. People don’t see the potential here, all they see is blight,” John said. “They see an impossible task.”

[…] one of the professional partners for the project. I accompanied Dayna Clark as she toured a Detroit high school that is being stripped by scrappers and Kathryn Kattalia as she explored small businesses in Detroit’s […]