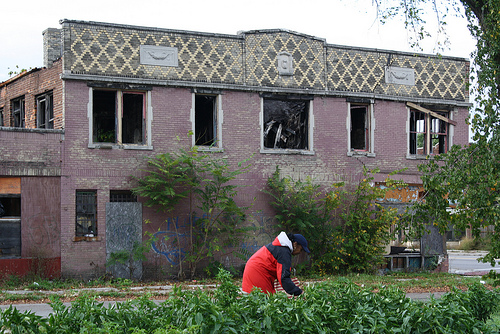 On the corner of Gladstone and Linwood Streets in Detroit, a garden grows where an empty, forgotten lot once sat. The neighborhood was among those affected by the race riots of 1967—burned out homes, smashed windows and boarded up storefronts still remain. But now, in harvest months, neighbors walk through neat rows of tomatoes, peppers and broccoli selecting fresh produce for their families’ dinner tables.

The garden belongs to the non-profit Urban Farming, one of the many organizations turning blight into bounty in a city with over 40,000 acres of abandoned property.

“Our neighbors say, ‘I want you to know you’re feeding my family,’ ” said Gail Carr, assistant executive director of Urban Farming. She filled a bag with produce to be delivered to an elderly neighbor who has a difficult time walking.

Urban agriculture took root in Detroit in the wave of economic distress caused by the financial crisis of 2008. It served as a way to feed a population deprived of fresh produce, to beautify the many tracts of littered, problematic land, and to save city government the $9 million per square mile it costs to do basic maintenance like lawn mowing each year.

Despite its benefits, the practice is not technically legal. Many of the 1350 small-scale farm sites are operating under the radar and owners can be ticketed for things like high vegetation.

But now, the possibility of a suite of city ordinances on the horizon means these kinds of urban farms could become even more prevalent. The Detroit City Council is working on legislation that will legalize gardening and farming in the Motor City. The measures would lay the groundwork for how urban farms are operated. They would provide guidance on the use of manure, pesticides, noise and other issues that come with running agricultural operations in close proximity of residential neighborhoods.

“There is a strong possibility you’ll see them approved and on the books by the spring,” said City Councilman Ken Cockrel Jr.

Michigan’s Right to Farm Act, passed in 1981 to shield farmers from nuisance lawsuits, has served as a barrier to the proliferating gardens and farms feathering into Detroit’s landscape. The Act prevents cities and towns from stipulating details of farming practices in the state, like what kinds of crops are permitted and what kinds of fertilizers can be used.

The law rendered the local government reticent to officially permit urban agriculture. City officials are concerned the safety and well being of residents will be at risk without more control over how urban farms are run, according to Cockrel.

Urban agriculture activists and entrepreneurs have long hoped to find a way around the problem. Some small, grassroots operations have struggled to expand because buying new lots from the city can be challenging—there are reams of forms to fill out and thickets of red tape to break through. 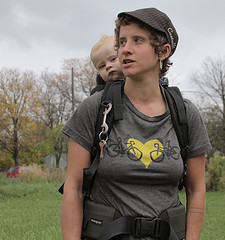 Carolyn Leadley, owner of Rising Pheasant Farms on the East Side of Detroit, with her son, Finn. Photo by Edna Ishayik

“It might only cost me $300, but it could take me eight months,” said Carolyn Leadley, a Michigan native and owner of Rising Pheasant Farms. “People think it’s easy, that they’re just giving them away.”

But it’s not so simple, she said.

She and her husband have been cultivating a plot since 2009. The location, just outside of Poletown on the Eastside is one of the lowest density neighborhoods in Detroit. It sits near a shuttered auto plant and emptied out due to the high volume of lost jobs. Abandoned lots are plentiful here, some of the grass grows shoulder height and illegally dumped tires abound.

The Leadley’s plot is well maintained, bordered on the east wall a thin hedge of delicate yellow and lavender flowers,the last of the season.

“I’m hoping what we’re doing is making the neighborhood better for the folks who are here and giving opportunities for better food access,” she said.

The couple was able to purchase another nearby lot from a private owner in February to plant tomatoes in addition to the leeks, scallion and head lettuce they were already growing. The expansion allowed them to hire a part-time employee. They’ve had their eye on the adjacent three plots, but purchasing more property has proven to be a difficult, time-consuming process.

The hope is that the forthcoming city ordinances will facilitate garden expansion in the future. Once the set of rules passes the City Council, it will be used to petition the state agricultural department for recognition of a local ordinance, a way of circumventing the Right to Farm Act.

Optimism runs high that the petition will be granted thanks to some signaling from the state agriculture officials. At a recent Hunger Summit held by United Way at Gleaners Community Food Bank in Detroit on October 3rd, the deputy director of Michigan’s Department of Agriculture announced that the agency would not let Right to Farm stand in the way of urban farming in the city. That’s according to Oran Hesterman, founder of the nonprofit Fair Food Network, who was present at the event.

That’s big news for people like Mike Score, the president of Hantz Farms. His company has been endeavoring for three years to install a 200-acre farm in the eastern neighborhood of Indian Village.

“Detroit is too big and too empty,” Score said. “Basic services are not in place and there are big tracts of abandoned land. What can you do in those spaces that lowers the cost of caretaking for the city and makes them more beautiful?”

His answer is to put derelict properties into the hands of businesses like his that will maintain and beautify the lots, where previously the city was on the hook for upkeep, and pay taxes on top of that. Once the city’s urban agriculture ordinances are in place they will be able to proceed with plans to purchase about a third of a square mile of city-owned land to plant stands of hardwood and Christmas trees.

Planting is already beginning on the small plot the company currently owns. Rows of deep holes have been dug to accommodate semi-mature oak trees. Across the street are four small homes-two are abandoned, one, the victim of arson, is doorless, blackened, and littered with ash and crushed glass.

The company hopes to purchase the properties, demolish the structures and plant more trees in their place.

In taking the major steps of passing ordinances and petitioning the state, Detroit will be stepping into uncharted waters.

Allowing urban farming promises to be an “important component in revitalizing the city,” said Cockrel but there is no template for how best to structure the rules.

“We are pioneers, he said. “There is going to be quite a bit of trial and error. It’s not like there’s a dozen examples, not a lot of reference points here.”

Great job Edna! Thanks for doing it in a wonderful way!

Wayne county just had a tax auction where tax deeds were sold for some 13000 properties. Most sold for 500 or less. Watch the deed recordings. New owners would probably flip the properties for 750 to 1000, make their hit and move on. Pick the properties in proximity to each other and walking distance. That process involves nothing more than payment in return for a deed.