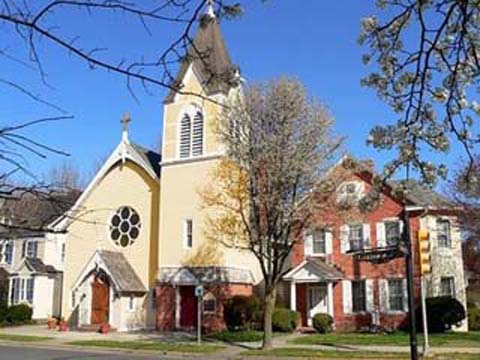 St. Andrew's Church in Easton, Md., was sold at auction.

Since 2005, St. Andrews Anglican Church in the wealthy historic district of downtown Easton, Md., hosted family movie night and spaghetti dinners on weekends. St, Andrew’s had a reputation for its open door.  But last month everything changed — the church was sold at auction after foreclosure.

In a growing trend, St. Andrews will now share space when its congregation meets next Sunday at the Temple B’nai Israel.

“The interesting thing about the recession is that the rich have become poor,” said St. Andrew’s Bishop Joel Marcus Johnson. “In the Bible it said, ‘The rich are empty sent away,’ which I never understood until now.”

As the recession plowed through industries, towns and homes across the nation, leaving in its wake rising unemployment, foreclosure and helplessness, one place remained a sanctuary: the local house of worship. But this recession has brought something new; the traditional helpers are in need of assistance as a small but growing number of churches reach the end of their financial line.

Churches are being shuttered, foreclosed or combined due to several causes, including the ripple effect of Wall Street’s collapse, a drastic drop in donations, and demographic shifts in surrounding populations.

When compared to current residential foreclosures, the number of churches failing to pay mortgages is minuscule. But any foreclosure of a church had been, until now, almost unheard-of.

“We’ve had more foreclosures in the past 18 months — two in 2007, seven in 2008 — than in all of our previous 44 years,” said Jac La Tour, a spokesman for Evangelical Christian Credit Union in Brea, Ca. The credit union has 2,000 evangelical clients, and holds mortgages for over 1,000 of them. La Tour said he does not foresee as many foreclosures this year.

“I would guess a couple but I say that with caution. A year ago we would never have thought we would have as many as we did,” La Tour said, adding that church lending is usually a good risk.

“Our clients, by their nature, are committed to repaying their loans, to managing their finances,” he said.

Most of America’s 335,000 churches are well established, any building costs paid off long ago. But in the decade leading up to the recession, Americans were in a buy, build and expand mood; and churches were no exception. According to La Tour, most mortgages are for expansions and additions.

La Tour said his company builds a relationship with a potential client and looks at leadership as one of the strongest assets when lending.

Bishop Johnson of the Redbrick Church admitted that, while a popular and well-liked leader, his reach exceeded his grasp. He confessed that the church’s foreclosure brought him down a notch.

“I don’t know if this has made me a better businessman, but it has added failure to my resume,” he said.

The lender, Talbot Bank, was so confident in the church and in Bishop Johnson’s leadership that it extended a $950,000 loan on a three-year note, meaning that the loan would be paid back in that time.

“We live in a wealthy area,” Bishop Johnson said. “Dick Cheney lives here, Don Rumsfeld, many retired academics. Our fundraising was so successful and our congregation had such élan that 80 percent of our pledges were from non-members.”

Then sometime in 2008, the phone calls started coming in: Stock portfolios were down and promised pledges would need to wait.

While those rescinded pledges hit hard, it’s the smaller amounts that most congregations are feeling. Across the country, pastors talk of tithing in decline — from 15 to 50 percent — and that means cutting back on ministries.

Some Christian leaders have turned to a religious financial ideology to guide them. For instance, the Crown Financial Ministry of Atlanta essentially takes a “what would Jesus do” approach to handling the church’s ledgers.

“It starts with the reality that everything belongs to God — all the bells and whistles and gadgets,” said Dr. Tom Bary, pastor of the Neptune Baptist Church in Neptune Beach, Fla., who hosted a four-week Crown seminar at his church.

“I was at first surprised how much the Bible speaks about money; money is mentioned a lot,” Bary said. “The Crown curriculum teaches us to be free from installation debt that depreciates.”

Bary’s church has 1,500 members with 13 full-time staff, including five full-time ministers and a part-time Spanish pastor.

“We cut our budget drastically last year,” he said, though he hasn’t needed to cut staff in the recession.   Some programs were discontinued and plans for expansion have been put on hold, but foresight staved off pink slips.

Foresight plays a role in many church stories, along with consolidation.  One of the more prominent practitioners in both is the Catholic Church. Many large dioceses, centered in urban areas, closed churches and schools and sold buildings. While suburban Catholic membership is healthy, many inner-city churches have shuttered.

Maureen Woods, a real estate paralegal in the Boston area, noticed changes in the Catholic churches in Boston.

“You see empty churches, not necessarily foreclosed, but for sale,” she said.

Kelly Ann Kowalski, director of Food for All, a nonprofit outreach and lobbying organization fighting hunger, also noted the changes in her hometown of Buffalo.

“The diocese did some long-term planning and began to consolidate,” she said. “There were five churches closed in Buffalo and folded into one called St. Claire’s.”

“Another thing that’s going on is teaming up. One day a church has the Presbyterians and the next day it’s an AME,” she said.Re

Many thanks to the good article, this must have used some time to create with handy info.