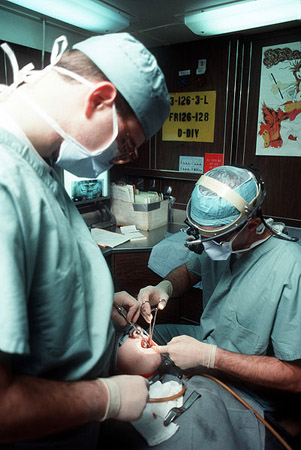 Andrew, a graphic designer from Brooklyn, recently had a few thousands dollars put into his mouth.

Two root canals, six fillings and two crowns at  his last dental visit, Andrew, who did not want to give his last name, is in the hole to the tune of over $8,000 in dental bills.

“I’m still waiting to hear back from my insurance company to see how much of that they’re going to cover, but it’s probably not even going to be a third of [the cost,]” he said.

The root cause of his fractured teeth is the recession.

Stress is messing up his mouth. As the Recession drags on, many more people are seeing dentists for stress-related tooth injuries.

“I work in advertising and my whole life is stress,” he said.

Andrew has been aware of a lot of teeth grinding and jaw clenching while on the job.

“They place an extreme amount of work on my back and my department is very small. I typically work 10 hour days,” he said
“I already blew through my dental [deductable] for the year, so I’m going to have to wait for my insurance to reset next year or change jobs. ”

The dental industry’s profits rose nearly 1.5 percent from 2007.  Dentistry had higher profits than any other industry in 2008, according to Sageworks, a firm that tracks financial performance.

While stress-related dental injuries aren’t stated at the direct cause of dentistry’s financial upswing, many more dentists,  like Dr. Edward Gottesman D.D.S., have been seeing more clients with the same problems as Christien since the financial crisis began.

“A lot of my patients have been cracking their teeth and having to have their teeth removed for… implants,” Gottesman said. “It may be that because of the recession and because of this stressful time people are crunching and grinding their teeth more and that’s probably lending itself to more fractured teeth.”

Gottesman notes that recently he’s been prescribing more night guards –mouth pieces worn at night to prevent tooth grinding– and relates it to the recessed economy.

“My schedule is more full,” Gottesman said. “My practice has certainly grown this year as opposed to last year and I think that fewer businesses can say that than most.”

Gottesman has also seen some of his recently layed-off clients coming capitalize on their dental insurance before it expires.  Dental benefits –depending on the employers—often last for a few months after a layoff.

Not all dentists are convinced of dentistry’s immunity to economic woes. Dr. Nick M. Mobilia of Elite Dental Arts in Manhattan believes all businesses are suffering as a result of the recession, including dentistry, He has seen evidence of the economic collapse firsthand because many of his patients had worked on Wall Street.

However, Mobilia is using the recession to attract clients with innovative technologies and services. “You have to distinguish yourself from other practices and other businesses,” Mobilia said.

“I have a lot of patients who have… a lot of stress so I use Botox in conjunction with my TMJ treatments” Mobilia said.
“Basically Botox is a muscle relaxer so it helps the muscles relax.”

“A lot of our patients do work in the financial markets so they’re undergoing a lot of stress,” he said.

Injecting Botox into the muscles around the joints of the mouth to help reduce pain from TMJ, soreness in the joints of the jaw that result from clenching muscles. TMJ is another common side effect of oral stress during a recession.

But some dentists are also seeing an economic slowdown based on their specialty.

“Dentistry I don’t think is immune to anything that’s going right now,” said Dr. John Koutsoyiannis  of Soho Smiles who specializes in cosmetic dentistry. “We may be more resilient than a lot of other professions, but it’s only because part of what we do is need-based.”

It’s the other part that isn’t need-based –the elective or cosmetic procedures– that are causing financial woes among some dentists. Elective procedures –such as teeth whitening and implants– are being performed in fewer numbers and dentists like Koutsoyiannis are starting to feel the crunch.

“More than half of my procedures are elective,” he said.

While Koutsoyiannis is hopeful the market might be turning around now, it’s been difficult for Soho Smiles. Many of his patients –including the more affluent ones– have been scheduling fewer appointments.

“I noticed an alarming amount of people pulling out or delaying their treatment,” Koutsoyiannis said.

This is not only bad for Soho Smiles’ business, but potentially risky for their patients mouths. Delaying oral treatment –especially for something as common during a recession as a chipped fractured tooth—can result in tooth breakage, loss of enamel, or the loss of the tooth itself and can cost much more once the damage is done.

“I’ve seen people delay necessary stuff and that’s not good because that can work itself into a larger problem in the future,” Koutsoyiannis said.

“When there’s a slowdown economically, dentists tend to want to learn about more technologies and more new materials that they can bring into their practice to offer patients more,” he said,

Edwab also believes the positive trend is a reflection of the industry’s strength during an economic crisis. He does acknowledge that many people are holding off on big-ticket cosmetic and less immediate procedures, but he doesn’t see a downturn in the industry as a whole.

“People still have emergencies,” Edwab said. “If you have to have a wisdom tooth out, you’ll have the one taken out that was bothering you, [but] you might not do the other ones.”

I can not agree with you in 100% regarding some thoughts, but you got good point of view.

Only want to say your article is awesome. The clarity in your post is simply impressive and i can assume you are an expert on this field. Well with your permission allow me to grab your rss feed to keep up to date with forthcoming post. Thanks a million and please keep up the good work. Excuse my poor English. English is not my mother tongue.

I am a regualar reader of your site and would just like to thank you.

Thanks for sharing this helpful info!

As a Newbie, I am always searching online for articles that can help me. Thank you

Thank you for your hard work on the post. I’m trying to create a list of writers that know about this kind of thing, please email me.

I appreciate the insight, and I think the writer definately knows their stuff… has better details than the wiki on the subject!

Considerably, the article is in reality the freshest on this deserving topic. I agree with your conclusions and will thirstily look forward to your incoming updates. Saying thanks will not just be adequate, for the extraordinary clarity in your writing. I will at once grab your rss feed to stay privy of any updates. Genuine work and much success in your business enterprise!

Hey, I like your website.. I found it on Bing and it has some usefulinformation. I will continue to check for updates!

Very beneficial – always spread the word. Getting excited about an update. For too long now have I had the need to begin my own blog. Guess if I wait any longer I will never ever take action. I’ll make sure to include you in my Blogroll. Many thanks!!

My sister and I have both really liked your web page and are recommending it to all our friends that share this interest. If we had any suggestion for improvement we could only suggest that you post a little more often because we can’t ever get plenty of a great thing. Finding this kind of stuff has proved to be somewhat so we want to thank you.

Good article. I was able to send this to a doctor I know that could use this on their blog..

I like the article. I was able to send this to a dentist I know that could use this on their website..