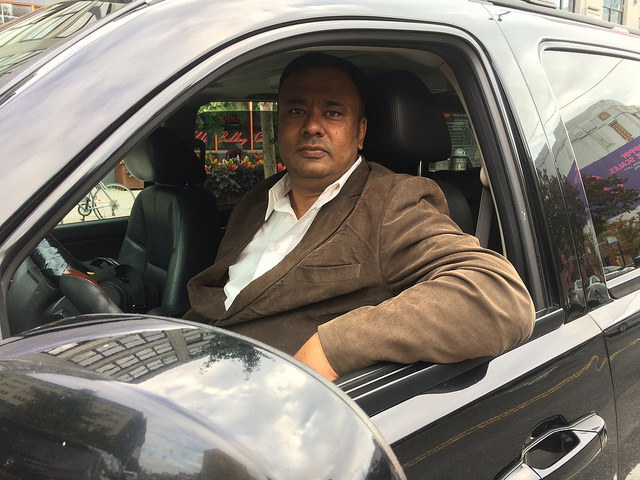 On a rainy Wednesday afternoon in Midtown Manhattan, 56-year-old Paul Frelich struck a pose familiar to New Yorkers. He stood on a curb, stared at his phone, and glanced up now and then, expectantly searching for an Uber driver to whisk him away. Ironically, his car was delayed due to the sea of other drivers responding to their own requests from phone applications.

Still, he would rather take Uber than public transportation.

“It’s way more convenient,” Frelich said. “I know when it’s coming so it’s easier to use.”

People like Frelich are exactly who Bruce Schaller, the former Deputy Commissioner for Traffic and Planning, discussed yesterday afternoon at the New York Metropolitan Transportation Council. He worries that New Yorkers who ditch traditional public transportation in favor of ride hailing apps are increasing traffic congestion and, ultimately, hurting the city’s economy.

Schaller’s research showed that people expect more readily available, reliable, transparent and comfortable modes of transportation than in the past. More than anything, most simply want to get to their destination as quickly as possible. With frequent breakdowns on subways and unreliable bus schedules, would-be mass transit users are instead ordering cars with mobile applications or even riding their bikes.

“It’s not like they have the best dressed drivers, or the ones that speak the best English, or the fanciest, shiniest cars,“ he said. “What they’ve done is they’ve taken all the stress points and they tried to squeeze out all the stress.”

Countdown clocks, bus lanes and off-board fare collection all help ease the stress of mass transit riders, but app-based ride services erase it almost completely by ensuring their users have access to the vehicle’s current location, the shortest route, and a simple payment system.

Especially now that more people than ever are utilizing features like UberPool and apps like Via and Chariot that are explicitly intended for ride sharing, he sees the negative implications for the economy to be immediate.

“Transportation network company fares do not reflect the costs to the public in increased traffic delay, emissions and potentially safety,” Schaller wrote in a February 2017 report. “These costs are very real, driving up costs of bus operations, freight movement, goods delivery and provision of on-site services.”

Still, the MTC acknowledge that these ride-share services fill a crucial gap in the transportation needs of citizens that they cannot fill. In the far reaches of the outer boroughs where subway and bus services are spotty or nonexistent, applications like Uber and Lyft can fill the void.

“Uber is (a) right-away car,” said Rakibu Zaman a 49-year-old Uber driver from Queens. “If somebody’s drunk, they cannot drive. If somebody’s too tired, they cannot walk or take a train. If they call an Uber, they can catch it right away.”

Rather than add more regulations to app-based ride services, Schaller’s conclusion for the Metropolitan Transit Council is perhaps most clearly stated in his report. He simply wants the MTA to make mass transit more enjoyable and reliable for riders instead of funding projects like building more elaborate stations to attract users.

“Doing so will be a far more beneficial use of scarce public funds than focusing on one expensive element … however imaginative and highly visible those projects may seem,” he wrote.