Friends of Rockaway Beach from Pavement Pieces on Vimeo.

Rockaway resident John Cori has been warning state and local officials about the vulnerability of the Rockaways diminishing shorelines for years. The slender peninsula acts as a barrier island for Queens and parts of Brooklyn, and bordering the Atlantic Ocean, is constantly testing Mother Nature.

And after Cori, a lifelong Rockaway Beach resident, witnessed the destruction of Hurricane Sandy last October, rather than look for vindication, he wanted answers.

“We were just a bunch of locals that were upset about the lack of a sense of urgency about the erosion issues in the Rockaways,” Cori said from his Beach 92nd Street home, right at the epicenter of the hardest hit area of the Rockaways.

He asked questions like why the city hadn’t been addressing long-term measures to prevent beach erosion? Why isn’t more sand being added to the beaches? And above all, why two tropical storms the past two years have not resulted in legislative action that would help protect the Rockaways from future storms?

With more questions than answers, Cori, along with fellow Rockaway resident Eddy Pastore, formed the neighborhood advocacy group, Friends of Rockaway Beach, in an effort to prompt local officials to take action. They not only wanted residents to have a say in the protection of their shorefront neighborhoods, but also how Post-Sandy restoration efforts were being addressed. 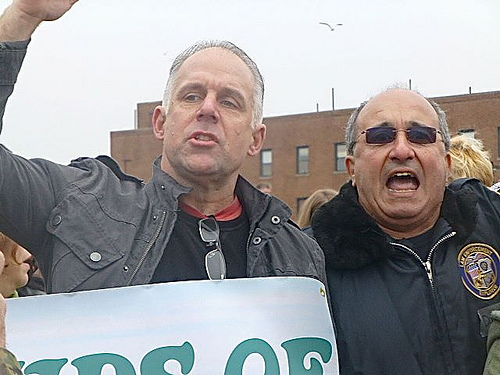 Cori has started multiple campaigns such as “Demand the Sand” and “Ready for the Jetties,” imploring local officials to assess the damage to the boardwalk and listen to residents’ ideas and proposals. Cori says he plans to hold a press conference at the steps of City Hall later this month to reach out to Mayor Michael R. Bloomberg’s administration.

“The people of Rockaway should be heard,” he added. “It’s very important for the city of New York to hear it because it’s a government of the people.”

Three months after Hurricane Sandy wreaked havoc on the peninsula, many residents are still trying to get their homes, businesses, and lives in order. Storm surges washed away 1.5 million cubic yards of sand, and ripped the wood on the Rockaway Beach boardwalk right off the concrete pilings, leaving beachside staircases and ramps filled with sand and detached from the walkway.

According to Cori, aside from some sand cleanup along Shorefront Parkway, the beach looks the same as it did the day after the storm.

“It still hasn’t woken enough people up,” he said. “That’s the biggest problem.” 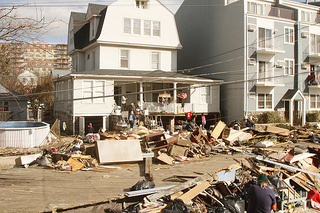 John Cori’s home on Beach 92nd St in Rockaway Beach, Queens shortly after Hurricane Sandy. The home is less than 100 yards from the Atlantic Ocean, and suffered extensive foundational and structural damage. Cori’s Friends of Rockaway Beach wants more of a say in how Post-Sandy restoration efforts to the beach community are implemented. Photo courtesy of John Cori.

Another problem is that the little protection Rockaway beaches have in the form of rock jetties–some of stone, but many made from now-decaying wood–do not prevent massive storm surges from washing ashore and spilling into the streets.

The beaches not only proved incapable of enduring Sandy’s power, according to Cori, but they also lack any elevation needed to act as a barrier between the storm surges and the beachfront community.
Stalled efforts to address beach erosion

Previous efforts to address how to protect the flood-prone peninsula have come to no avail. As early as 2003, the U.S. Army Corps of Engineers and New York State’s Department of Environmental Conservation agreed to conduct a study on how to provide long-term protection. Whether in the form of refurbished rock jetties, a redeveloped beach berm, or the building of sand dunes along the beach, the study remains incomplete due to a lack of funding, leaving long-term protection measures unaddressed.

“The past 10 years, it was always an infrequent project,” said Cori. “If our beaches were eroded, we’d have to wait at the mercy of those (projects) being funded, and those were usually four to five million dollar projects.”

The Army Corps of Engineers announced earlier this month that they would restore most of the southern shoreline–from Beach 19th to Beach 149th–in an effort to replenish sand washed away during the storm, widening the gap between the ocean and beachfront homes.

“Our task is to construct a restored beach to the original authorized design which is a beach sand and a beach berm 10 feet above sea level and at least 100 feet wide,” said Dan Falt, project manager of the Army Corps of Engineers, in an interview with NY1. last month.

But the project is not set to begin until June and is expected to take four to five months, the Army Corps of Engineers said. Further exasperating the problem is the notion that the project would be underway in the height of the Atlantic hurricane season: June until the end of November.

“It’s way too delayed,” Belle Harbor resident Joe Hartigan said in response to the Army Corps of Engineers current restoration plans. “Nothing has been done.”

Another member and vocal advocate for Friends of Rockaway Beach, Hartigan said it is disheartening to constantly be reminded of the storms damage to the Rockaways, and is worried about the next hurricane season.
“It really starts to affect (people) down the road,” he added.

The future of the Rockaways

Earlier this month, the Bloomberg administration allocated $1.77 billion in Community Development Block Grants to address the most urgent housing, business and infrastructure needs, according to a Feb. 6 press release .

However, of the $1.77 billion, only $140 million is dedicated to “infrastructure resiliency,” which is mostly through entrepreneurial competitions encouraging business plans that can stimulate economic growth and a systematic overhaul of utilities operations. It is unknown whether any of the grants will go toward funding to the stalled 2003 study on how to address Rockaway beach erosion. 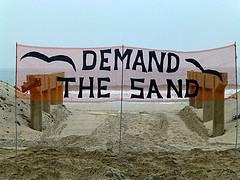 Cori organized the “Demand the Sand” campaign in August 2012 asking state and local officials to tackle beach erosion and address the lack of any beach barriers in place to protect the community. Cori says that even after Sandy swept 1.5 million cubic yards of sand off the beaches, long-term measures to protect the beach have stalled. Photo courtesy of Friends of Rockaway Beach.

And while Sandy has also reopened the debate of rebuilding along New York’s coastline (The damage to areas like Rockaway Beach, Far Rockaway and Breezy Point in Queens, and Oakwood Beach in Staten Island, even prompted Gov. Cuomo to spend as much as $400 million – on home buyouts to encourage residents to relocate), Rockaway residents do not plan on moving. Amidst the destruction, they will always hold a special bond and unconditional loyalty to the isolated beach community.

“They’re here for life,” said Cori. “We have sand in our shoes.”