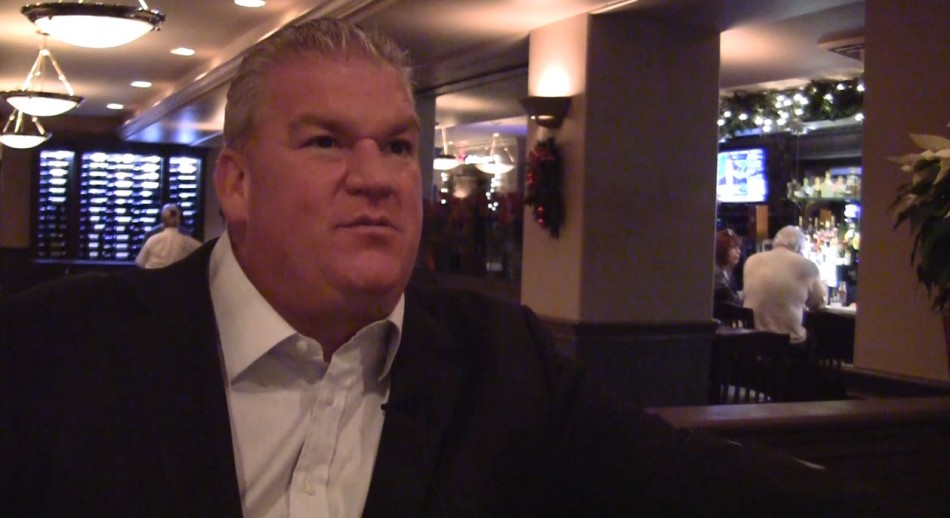 The day after Superstorm Sandy ravaged across the Northeast, Raymond Gaissert pulled up to his Seaport restaurant in Lower Manhattan unsure what to expect.

“Our experience with Irene, we had very little water so we didn’t do a lot of prep for Sandy,” he said, “We didn’t think the water was gonna come up this far on Water Street.”

When Gaissert opened the door to MarkJoseph Steakhouse, he realized there was no way he could’ve prepared his restaurant for the damage it received.

The 27-year restaurant owner wasted no time rebuilding MarkJoseph. The city told residents and business owners not to pump out flooded water until Tuesday night. The next morning, Gaissert arrived to begin the long process of clean up. To his surprise, his employees were there as well.

Chefs put down their knives and picked up hard hats. Waiters and busboys went into the basement, wading in chest high sludge from the East River as they made sure the water pump stayed clear of food and bottles.

“The reason we got open so fast is because we didn’t wait for insurance,” he said. “I used my own money and I used my own employees.”

Working 20-hour days, Gaissert was able to keep most of his employees employed, even if it wasn’t the work they were used to. For those who went on unemployment, Gaissert paid the difference.

Thirty days and $200,000 worth of damage later, Gaissert and his employees had rebuilt MarkJoseph and were ready for re-opening day. But they were the only business on the block.

According to the New York Times, http://www.nytimes.com/2012/12/10/nyregion/lower-manhattan-continues-to-grapple-
with-recovery.html?_r=1& thousands of small businesses are closed down, 10,000 jobs have been lost and 3,000 apartments are still unlivable in the Seaport area.

Many large corporations have relocated to midtown, a move Gaissert didn’t see coming.

“We thought that if we could open, the buildings would be open faster than we could,” he said. “We were wrong.”

Gaissert said most of his customers won’t be back until next spring, if then. But some still find their way to MarkJoseph.
Rich Williams, of Westchester County, said he was elated when he heard MarkJoseph was re-opening.

“I enjoy the camaraderie, I enjoy the friendship,” he said, “It’s my first night down here in six weeks, I couldn’t wait to come back.”

But most aren’t coming back. Gaissert said the restaurant is making about $5,000 a night. This time last year, the holiday season was bringing in around $25,000.

But he said he doesn’t regret rebuilding.

“My employees, tipped employees and people who work paycheck to paycheck is the reason we wanted to get our livelihood back very quickly,” said Gaissert.

For him, waiting until spring would’ve been the same as not re-opening at all. Looking forward, Gaissert says he knows a storm like Sandy will happen again and he’s not sure how to prepare.

“You can’t build a bubble around lower Manhattan,” he said.

But for now, MarkJoseph is open again. The Christmas lights shine bright on a dark street, a reminder that Seaport is rebuilding.