Seeking comfort in the “Truth” 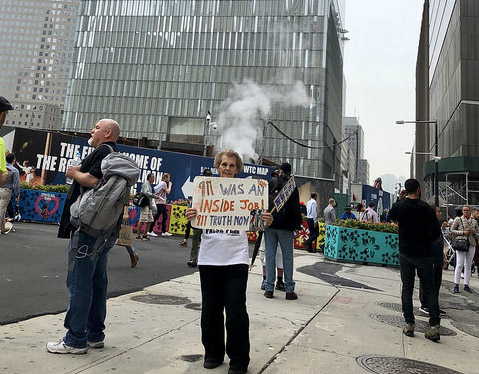 A “truther” holds up a sign that reads “9/11 was an inside job” in front of the Freedom Tower yesterday. The group believes the 17th anniversary of 9/11 was a good opportunity to spread their beliefs that the terrorist attack was a government conspiracy. Photo by Levar Alonzo

On the 17th anniversary of 9/11, a day for families to pay their respects, a group of “truth seekers” handed out pamphlets to mourners, tourists and onlookers to convince them of the “truth” behind the attacks.

The group wants people to mourn and remember their loved ones, but to also consider that there may be scientific facts behind the collapse of the towers. They also believe the government is behind the attack because it wanted the U.S. to go to war with Afghanistan and Iraq.

“So many people have died, and the government had their own motives behind the destruction of these towers,” Dieu Khuu, 40, a “truther” said. “Yes, it was a tragic day for all of America, but every year more names are being added to the list of victims. The failed wars are a testament to a failed governmental agenda.” 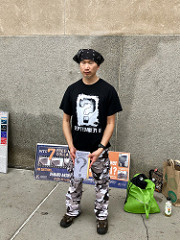 “Truther” Dieu Khuu  believes the “truth” comforts survivors and families. He took his message to  passersby on the 17th anniversary of 9/11 yesterday. Photo by Levar Alonzo.

Khuu said that he was 23 when 9/11 happened and at first he believed what everyone thought, that “radical Muslims attacked American freedom.”

“As I got older I paid attention to every anniversary, then the architecturally and scientific facts started to play over in my head,” he said. “Gravity simply does not collapse a building. It had to be more, so I question everything that was told to me about 9/11.”

Another “truther,” Eileen Colas, 56, who wore an “arrest President Bush” t-shirt, said that she worked as a software engineer in Tower 2 of the World Trade Center. On the day of the attack, she came out of the train 15 minutes after the first plane hit. She was then ushered away by police to Foley Square, where she spent the day watching the devastation.

She started to doubt what was being reported when she recalled unexplainable events at her job before the attacks.

“The days leading up to 9/11, my offices powered down our complex with all our data,” she said. “No one explained why this was done. It was never done before. I believe it was so bombs could be placed in our offices.” 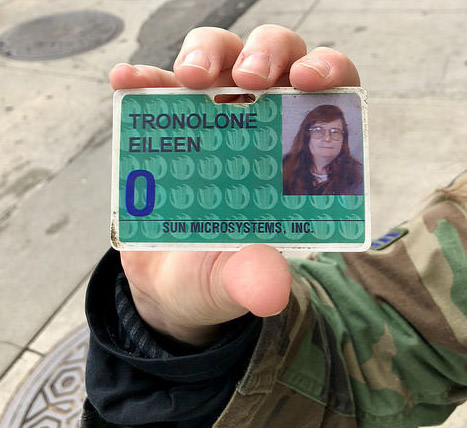 Eileen Colas, shows her ID from Sun Microsystems that was located in Tower 2 of the World Trade Center. Photo by Levar Alonzo.

Colas believes that the American public is misinformed.

“The people that know the truth are hiding it from us, ” she said. “They know that the truth could start riots and civil unrest. I’m not going to be afraid to use my voice. It might be one voice but I’ll try to let it be heard.”

As Colas spoke, another believer, Mike Arnold, who has attended the anniversary for the past 11 years, said he wants Americans to question everything they are told about 9/11.

“The official story is a lie,” he said. “I am not against the flag or anti-American as some might think. Learn the truth and you will see that I a true patriot.”

They believe the “truth” is the only real comfort for the attacks.

“Honor the victims by telling the truth,” Khuu said. “The remains of victims were placed in the dump. Families don’t have that closure to even bury their loved ones. Give them closure with the truth.”