Selfies, tourists and memories of 9/11 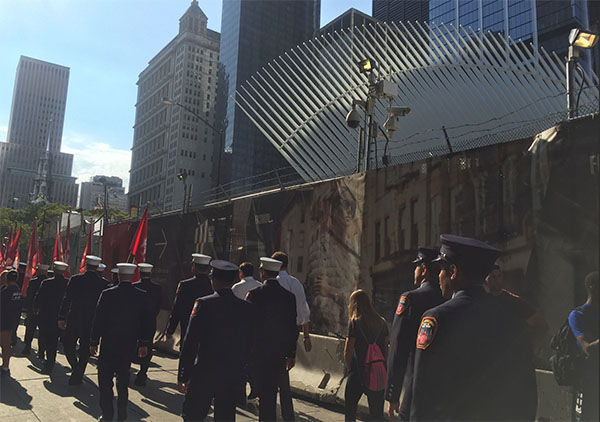 Fifteen years after the attacks of 9/11, the sun was shining, the air clear. The spot known as ground zero in the days immediately after 9/11 now serves as the memorial site. There’s a memorial museum, store, kiosks with pamphlets and tour schedules, and memorial pools. The memorial pools are both surrounded by black slabs with the names of those who died cut into their surfaces.

Groups of teenage girls gathered yesterday to take selfies in front of the twin reflecting pools, in the imprint of the Twin Towers. Tourists walk along the site plugged in to guided tours, offered for $39 at the National September 11 Memorial & Museum. Shoppers pass by with bags filled with mementos from the 9/11 Memorial Museum Store.

“It was dusty. Smokey. Ungodly,” Doug Marshall, a firefighter from New Brunswick, N.J who was a first responder . “To imagine, that outside the steel that everyone sees in pictures, there was nothing else. Pulverized. You figure all those office buildings—how many desks, chairs—there was nothing. You couldn’t find anything discernable. It was the craziest thing, the force involved.”

He and his department worked for 10 days straight following the attacks. They set up camp at New York University, with kitchens and tents, a temporary base for them to come back to each night.

Marshall pulled himself away. It was time for him and his fellow firefighters to group together for a photo. As soon as Marshall is gone, a couple takes his place and aims their selfie stick at themselves.

Watch the crowd gathered at the 9/11 memorial site and you will see markers of people in service: t-shirts with the names of the fallen beneath the words, “Never Forget”, badges and pins indicating ranks, ladder numbers, and squads. Men and women in uniform stand in clusters all around the site.

One person in uniform is Matthew Hodges, 18, from Ridgecrest, California. Hodges is in the Navy, and came to New York with several sailors from base.

“We were given the option to go to the 9/11 memorial, on the 15th anniversary. It was a chance to get away from base, so I thought I’d come check it out,” he said. “It’s a cool site, I’m from California so I’ve never been this far east. I was also really young when it happened so I like to look into it, see everything. There’s a lot of emotion down there, so it’s different.”

Hodges described 9/11 with the detachment of someone who never knew it as anything other than a historic event. He was just three years old in 2001.

Hodges said he and the other sailors from his base will spend the day at the site, eating pizza, and took photos.

But about 20 feet from the sailors, an older man in a suit and fireman’s hat stood alone at the reflecting pool reading the names from Ladder 42. He stayed for a quarter of an hour, reached out a hand to touch the bronze piece, then walked away, wiping tears from his eyes.

Barry Byrne, an off-duty firefighter from Phoenix, Arizona, wanted to visit on the anniversary. He stood out from the crowd with his jacket covered in firefighter patches and emblems and an American flag bandana worn on his head.

“America cried and America responded that day. It feels right here,” he said. “And this is a very patriotic place to be right now.”