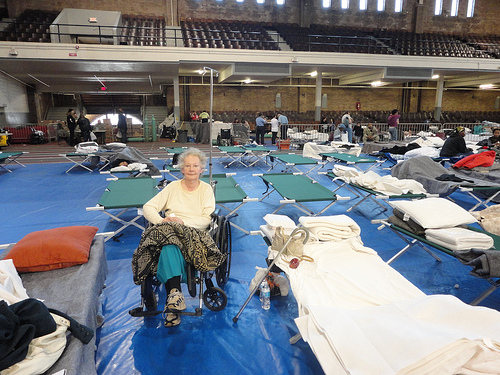 Kathleen Callahan was relocated to the Jersey City Armory storm shelter after falling in her powerless Hoboken apartment. By Alyana Alfaro and Jordyn Taylor.

Wide-eyed and pale, Kathleen Callahan sat shaking in a wheelchair amidst the rows of green cots that lined the floor of the Jersey City Armory. Less than 24 hours ago, the 75-year-old was lying on the floor of her unlit apartment, firmly believing she was going to die.

In the early hours of Saturday morning, five days after Hurricane Sandy left Callahan’s Hoboken apartment without power and heat, the woman awoke with an unusual numbness in her legs.

“I got my cane nearby and I went to step on the floor and I went down,” she said. “I have arthritis in my knee, so I was on the floor in the dark, and I didn’t know what to do so I said ‘God, help me.’ I had a dim flashlight that was kind of going dead. It was like everything was going dead, including me.”

Despite a mandatory evacuation notice prior to Hurricane Sandy, Callahan chose to stay put; she had no family, and nowhere to go. In the days following the storm, she was trapped in her apartment, struggling to live off her dwindling supplies. But after suffering a fall on Saturday morning, she was rescued by paramedics, brought to Christ Hospital, and was eventually relocated to the Jersey City Armory—currently serving as a storm shelter for approximately 220 people. Unsure of when and how she would be able to return home, Callahan sat in the Armory feeling shocked, alone and defeated.

Callahan had weathered countless hurricanes, snowstorms and power outages over the course of her life. But she had never seen a storm like Sandy.

“I have survived many storms, but this was like a river in front of my building,” Callahan said. “The block was all flooded, the power was all out. I never saw anything like it in all my 75 years, never.”

And even after the rivers receded, life did not get easier for the ailing Callahan. With the arthritis in her knees acting up during the storm, she was unable to leave her apartment to collect the free meals being distributed a block away in Church Square Park. From Monday night when the power went out, to Saturday morning when she fell, Callahan was trapped in her apartment with no light, no meals and diminishing supplies.

“There was no hot water,” she said. “The refrigerator didn’t work. The water was getting really dirty; I was scared to drink it anymore. I had some bottled water in my refrigerator, but I wasn’t thinking there was going to be much of that for too long. My candles were getting kind of low, and I knew if this kept on another week I wouldn’t have any candles and the batteries in my flashlight would be gone.”

Ironically, it could have been the fall that finally saved her. After crashing to the floor, Callahan dragged herself around her apartment for hours in the dark, searching for a spot that offered cell phone service.

“I don’t know how many times I checked that cell phone,” she said. “So finally Saturday—all the days are starting to meld together, you begin to not know what day it is anymore—so Saturday, that was yesterday, I got a signal on my cell phone and I called 911.”

On Saturday evening Callahan was taken to Christ Hospital for a brief examination, and she was later transported to the Jersey City Armory at 1:37 a.m. on Sunday morning.

Callahan, though visibly shaken, said the staff and military personnel at the shelter have helped her cope with her ordeal.

“The young people here, the air force, they are really lovely people,” Callahan said. “The men, the women, they couldn’t be nicer. They try to comfort you—really lovely, lovely young people. I said to one young man that I glad to find out we had this great of an air force.”

Still, it will be hard for Callahan to forget the experiences she endured in the wake of Hurricane Sandy.

“I am so shocked,” she said. “I still can’t believe it. I woke up this morning—I think I got about a half hour of sleep, if I got that—and when I woke up, for a minute I thought, ‘Where am I?’ I couldn’t believe it. I thought, ‘I cant be here, no. This didn’t happen.’ But now it sunk in really well.”