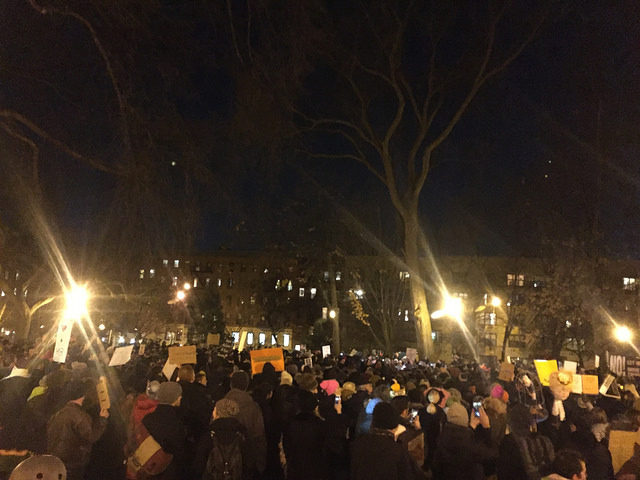 A crowd gathers for the “Rally Against Hate” at Tompkins Square Park yesterday. Photo by Rebeca Corleto.

On the 10th day of President Donald Trump’s administration, a protest in New York City was nothing new. But in light of several executive orders signed by the president in under two weeks, a renewed sense of urgency ignited the protest at Tompkins Square Park in the East Village yesterday.

The scene was covered with homemade signs supporting immigrants, refugees, women, and equality.

“No hate, no fear, everyone is welcome here,” chanted the crowd.

President Trump’s opposition has a lot to protest about. No less than 15 executive orders have been signed so far. Cristina Montanez of the Lower East Side, couldn’t decide which was the most upsetting to her.

“It’s really hard to single one out,” said Montanez. “It’s just all so disappointing, what’s happening right now. Everything is just terrible. The immigration ban, abortion, the wall.”

Montanez came to the rally with her husband and two young children. The family is originally from Queens and now lives on the Lower East Side. After hearing about the “Rally Against Hate” from her daughter’s school, the family decided to show support.

Like millions of Americans, Montanez is the daughter of immigrants. Her parents came to the U.S. from Colombia in the 1960s. When President Kennedy was assassinated, her mother cried. On the night of the election, Montanez herself cried.

“It touches home,” she said. “My parents are immigrants. And I’m a woman. I can’t believe that this is happening. I’m feeling confused, anger, shock. I’m scared for my kids. There’s going to be a revolution or something. This is the land of immigrants.”

Seth Tobocman took his personal protest a step further. Tobocman is a New Yorker since 1976, and a resident of the Lower East Side. Find a protest in NYC in the past two weeks and you’d likely see Tobocman there—handing out his paper, “How Do We Fight Back? “The paper features contact information of many organizations leading the Trump resistance movement, illustrated with political cartoons. The paper answered the question asked by many protestors: What can I do next?

“We got together a list of organizations—people want to figure out how to get involved,” said Tobocman. “Beyond going out to something once. People look into things long-term and they get involved in organizations. This paper is just one to help people organize.”

Melody Estevez, 22, joined her fellow members of the Lower East Side Girls Club at the rally. The group also attended the Women’s March on NYC on January 21st.

“The ban is the most concerning issue to me,” said Estevez. “He’s marginalizing the wrong people, and not really getting to the root of the issue. And he’s avoiding the real issues here—like gun rights.”

As immigrants or children of immigrants, many of the girls that Estevez works with at the Lower East Side Girls Club were worried about their futures after hearing the recent executive orders.

“[The girls] are freaking out and they come to the club and we just tell them that we are fighting for you,” she said. “We are trying to spread the word about knowing your rights. Know what you can do if someone comes to your door.”

Estevez hoped that with enough physical support at rallies like this one, the message would reach the administration.

“We’re coming out in great numbers, and it’s not violent. We are peaceful. We are pro-people. And we are here to show him [Trump] that if he keeps doing these types of things, we’re just going to keep coming out. That’s the fight ahead.”